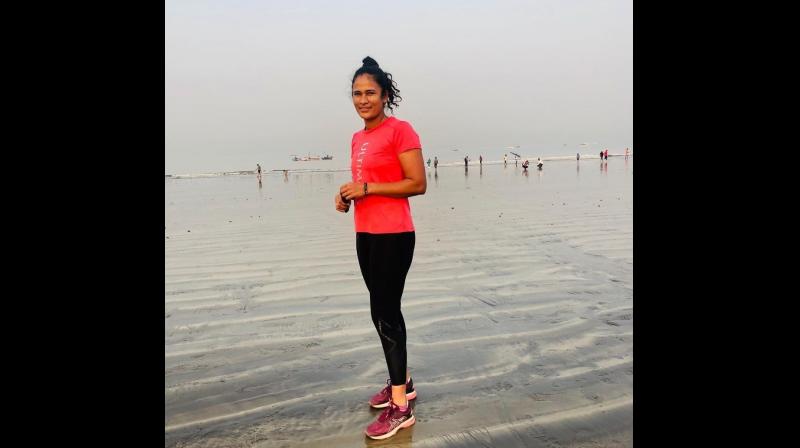 Rajani Etimarpu, the goalie of the Indian women’s hockey team, returns a frank answer when we ask her whether she has got over the bronze medal loss at the recent Tokyo Olympics. “Not yet!” she says. “But we have to move on.”

The team may have missed making history at the Tokyo Games, but it did manage to capture the attention of the cricket-frenzy nation with its stellar performance.

The Indian women had put up a spirited show and qualified for the Olympic semi-finals for the first time in history. And when they went down fighting to Great Britain in the bronze medal match, it was heart-breaking for a billion fans. And no one had a better close-up view of the way it played out than Rajani, the second goalkeeper of the team.

Reflecting on the ‘so near yet so far’ match, she says that it was certainly disappointing. “We gave it our everything but it just wasn’t our day,” she laments.
“There was silence all around as we slowly gathered,” she says, describing the scene after the loss.

The 31-year-old admits that the team took some time to overcome the distress. But they ultimately took the defeat in their stride, telling themselves that ups and downs are part of sports.

“What was heartening was the kind of support and encouragement we got this time. It was incredible!” she says. While the team might have missed the historic bronze medal, the feisty players have won lots of hearts and respect.

When Rajani returned home from Tokyo a few days ago, her family, though disappointed that the team was unable to win a medal, expressed appreciation of its efforts. And others too celebrated the courage and spirit of the women.

“We are proud of our performance, especially the way we bounced back and stormed into the quarter-finals. The clash with World Number 2, the Aussies, was tipped to be a tough draw. But we exhibited great skill and defeated them 1-0 and scripted history,” says Rajani.

Describing Rani Rampal as ‘Captain Courageous’, Rajani adds that she’s a live wire. “Rani has always been positive and infused that spirit throughout — both during practice and away from the game,” she says.

Training and playing with some of the best players in the world had been a great learning experience, Rajani says, and feels nothing can be bigger than representing India at the Olympics. Before the start of the Olympics, the team also had a long conditioning camp at Bengaluru, which helped the women to understand each other better.

Rajani was a part of the 2016 Rio Olympics too. When we ask how different the Tokyo experience was, she says that this time the team was far more experienced. “We were a very young team for Rio, but now there’s a lot of experience; in fact, the team has a great balance of youth and experience. So naturally, there was a lot of hope, and there was also pressure to live up to the expectations,” she says.

Rajani feels the team’s performance will boost confidence in upcoming matches. She adds that they learned several lessons during the Tokyo campaign. “We hope that our Tokyo Olympics stint will inspire Gen Next. But now we have to regroup and start prepping to win the Asian championship,” she concludes, on an optimistic note.