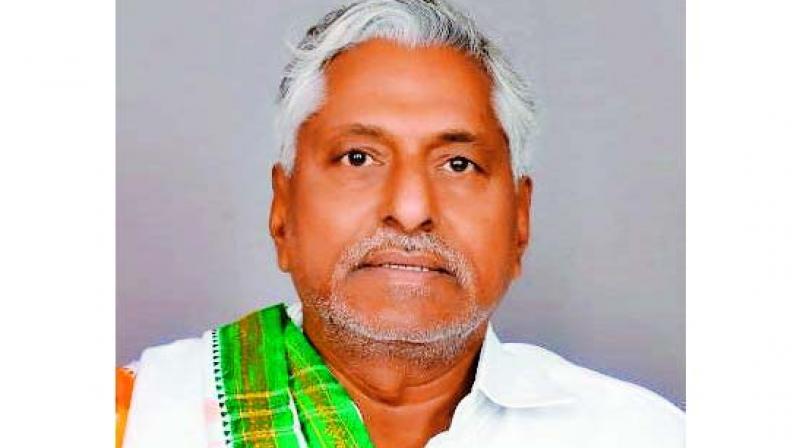 HYDERABAD: Telangana Rashtra Samiti (TRS) MLA and public undertakings committee (PUC) chairman in the Assembly A. Jeevan Reddy came down heavily on the Congress and the BJP for resorting to personal attack on Chief Minister K. Chandrashekar Rao and for undertaking false propaganda on Dalit Bandhu scheme.

Addressing a press conference at Telangana Bhavan here on Tuesday, Reddy said only brokers, jokers and loafers in the state were resorting to such acts while entire people were rallying behind the Chief Minister and his welfare schemes.

"The entire Dalit population in Telangana celebrated the launch of Dalit Bandhu scheme launched by the Chief Minister in Huzurabad on Monday. There was a festive atmosphere across Telangana. But these brokers, jokers and loafers started criticising the Chief Minister soon after he launched the Dalit Bandhu. Revanth Reddy even dragged the Chief Minister’s wife into this issue who is in no way connected with politics or the government. Only a political broker like Revanth can stoop to such level," Reddy alleged.

He said the Opposition leaders were worried that if Dalit Bandhu was implemented, it would put an end to their political future in Telangana. "The Congress and the BJP leaders are in a state of shock after the Chief Minister extended the scheme to the entire 17 lakh Dalit families in the state on saturation-basis. The Chief Minister cleared all doubts on Dalit Bandhu in his speech in Huzurabad. He made it clear that the government would spend Rs 1.70 lakh crore in the next four to five years to cover every Dalit family and will sanction Rs 40,000 crore in the budget every year," Reddy said.

Referring to Sanjay's ‘applications movement’, Reddy said, "This is a big joke by Sanjay. People are already treating Sanjay as a joker after he claimed that he will ensure insurance claims to all vehicles damaged in floods during GHMC polls. Similarly, people are treating MP Aravind as a loafer because he ditched Nizamabad turmeric farmers on setting up turmeric board after signing on a bond paper during Lok Sabha polls."