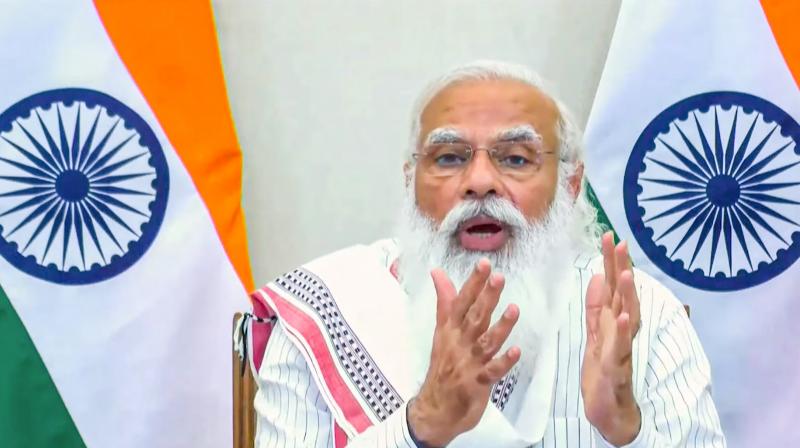 New Delhi: "You are all winners and role models," Prime Minister Narendra Modi told India's top para athletes, who are set to compete in the upcoming Tokyo Paralympics.

Modi virtually interacted with 10 athletes, including 2016 Rio edition gold winners Devendra Jhajharia and Mariyappan Thangavelu, and urged them to compete without pressure.

The Paralympics will be held between August 24 to September 5.

"In spite of all the difficulties in your lives, you did not lose heart and kept on fighting. By your hard work and strong will, you have reached this stage against all odds. You are going the represent the country in the biggest sporting stage," Modi said.

"You all are winners and role models. You should not play with pressure. I hope you all will give your best and medals will follow. You will make the country proud."

India is sending a 54-member team — the largest ever — in the upcoming Tokyo Paralympics with hopes that the country will produce its best ever performance.

The team has some of the brightest medal prospects like Jhajharia, seeking his third Paralympics gold (after 2004 and 2016) in F-46 javelin throw, Mariyappan (T-63 high jump) and world champion Sandeep Choudhary (F-64 javelin throw).

India will compete in nine sports.

Mariyappan, who had won a gold in the last edition in Rio, will be the flag bearer of the Indian contingent during the opening ceremony.

"We have won 12 medals so far in the Paralympics. Our athletes have done very well in the international events in the last few years.

"I hope they will give their best and win laurels for the country."

India will start its campaign on August 27, with men's and women's archery events.