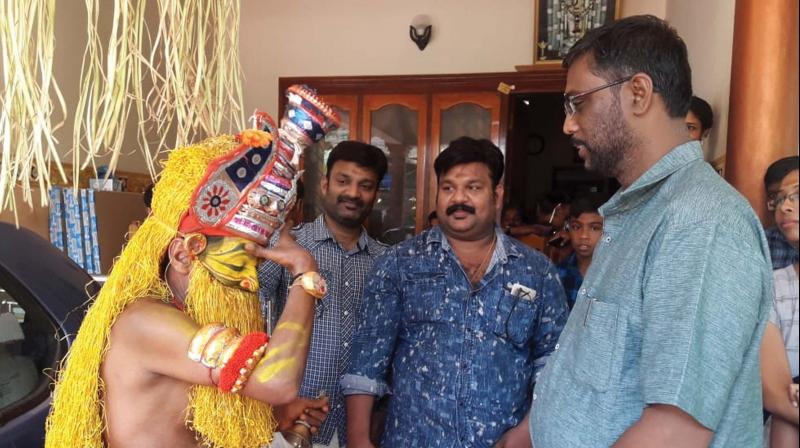 Thiruvananthapuram: You may think that the demon king Mahabali, who secured a boon from Lord Vishnu to visit his subjects every year on the annual 'Thiru Onam' day as per lore, is just a mythical character.

But, come to Malabar, the north Kerala region, on Onam days and you can see "him" live, visiting each household in the village, where he is welcomed with traditional lamps and vessels filled to the brim with rice.

He, in turn, would bless the family members by sprinkling rice on them.

The very scene of him walking and running around the green countryside and paddy fields, donning a heavy headgear and holding an "olakkuda' (palm leaf umbrella) in the hand besides ringing a brass bell, is a visual treat during the Onam season in the region.

And, he is none other than "Onapottan", the folk representation of Mahabali who is revered as a demigod and symbol of prosperity.

However, the people of Malabar have missed the colourful and 'divine' presence of Onapottan for two consecutive Onam seasons including the ongoing one due to the outbreak of the COVID-19 pandemic.

As the annual 'Thiru Onam" day falls tomorrow (Saturday), the traditional artistes, who have got the birth right to deck up as the folk incarnation of the noble demon king, are disheartened as they cannot continue the decades-old practice.

According to local belief, the home visit and blessing by the 'Onapottan" on the 'uthradom' and 'Thiru Onam' days of the Malayalam month of Chingam are auspicious.

Cutting across age barriers, members of Malaya community, a scheduled caste, are decking up as the folk character and visit local houses to retain their age-old tradition.

"It is for the second consecutive year that we are not decking up as Onapottan during an Onam season. My son and brother's son also used to don the grease paint for the character from our family," noted Theyyam-Onapottan artist Babu Thalapp told PTI.

Missing an Onam season is a great pang for those who have been traditionally donning the character for years, he said, adding that they have no way other than skipping it as several risk factors are involved.

"When the Onapottan travels visiting each house in his rich make-up and colourful costumes, several people especially children will follow him out of amusement. It is not good in the wake of the pandemic," he said.

At homes, this "Mahabali" is welcomed by the family members especially elderly persons by lighting lamps and the very practice could not be adhered to with the social distancing norms necessitated in the present circumstance, he said explaining the reasons to skip enacting of Onapottan.

Unlike the silk attire, royal jewellery and crown worn by the 'asura' (demon) king in children's story books, this 'Mahabali' in Malabar can see draping a humble red colour cloth under the waist and holding a palm leaf umbrella in his hand.

His long, yellow beard spread from the moustache up to the chest, vibrant facial makeup and rich ornaments are unique.

The most interesting aspect of this folk character is that the performer would not speak to anyone after decking up as Mahabali.

"Pottan" means a dumb person in the local parlance.

"Onapottan does not utter any word during his travel or while visiting homes. He will ring the brass bell in his hand, while walking, to make people known about his arrival. When they listen to bell ringing, households will make arrangements to receive him at their homes," Babu, a native of Kannur district, added.

After receiving blessings from Onapottan, each family gives him rice or money as 'dakshina' as per their choice.

The folk character would usually be accompanied by two other artistes who play the Chenda (drum) and Illathalam (cymbal).

Each Onapottan has a designated area to visit and shower blessings on people and one would not encroach into the territory of the other.

Manoj Kumar R K, a Kozhikode-based percussion artist, who used to accompany the Onapottan, said they would not use any mode of transport and would walk for several kilometres to cover all the households.

He, however, said he is a bit worried that the folk art is now performed in adherence with its tradition and rituals only in interior villages.

"In cities and towns, Onapottan has more or less become a showpiece now-a-days. As children can also deck up as the character, many outfits and organisations are using the art form to add colour to their functions. Television channels are interested in them only during the Onam season," he told PTI.

P N Nambiar, a senior citizen who retired from government service, said for him, Onam would not be complete without receiving blessings from Onapottan during his childhood days.

"We children used to wait for hours expecting the arrival of Onapottan. His big headgear and long yellow beard were our main attraction. I also remember walking behind him with my friends when he moves ringing the bell," Nambiar, hailing from Vadakara, said.

Stating that each time he sees the Onapottan, he would go back to his childhood, Nambiar said he could not express his despair in words as the folk character could not turn up for two Onam seasons due to the COVID pandemic.

According to mythology, Onam is connected with Asura (demon) King Mahabali, under whose reign everyone lived in happiness and equality. Envious by his popularity, Devas (Gods) sought the help of Lord Vishnu to get him banished into the netherworld. But before going down, Mahabali secured a boon from Lord Vishnu to visit his subjects every year on 'Thiru Onam' day. The demon king's annual visit is celebrated by Keralites, who lay by their front yards with floral carpets, wear new clothes and prepare a sumptuous feast.

7 of the hottest interior design trends taking off right now