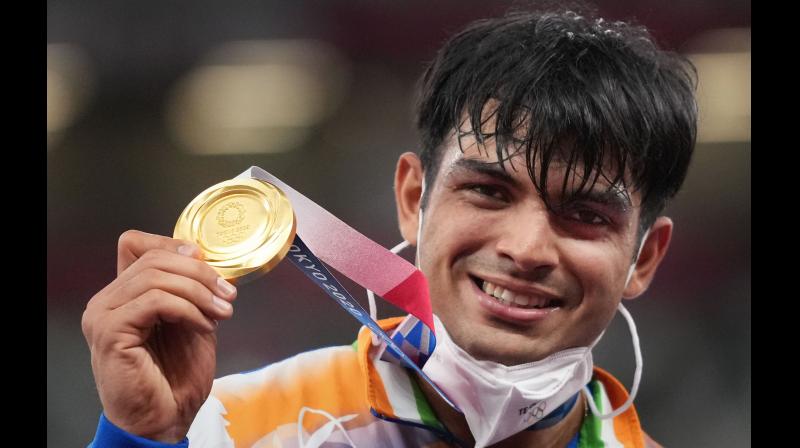 Chopra scripted history on Saturday by winning India’s maiden athletics medal in the history of the Olympics. In doing so, he also became only the second Indian to bag an individual gold in the Games.

Chopra’s father Satish Chopra, who has a farming background, credited family support behind his son’s achievement.

“When one’s child achieves success and brings glory to the nation, there are no words to express happiness of parents and entire family. We live in a joint family and we are four brothers. Neeraj (Chopra) has been lucky in the sense that he got full support from entire family, who constantly encouraged and motivated him to pursue his passion,” he told the media here.

The athlete’s mother Saroj added: “Today, he has lived up to everyone’s expectations and made India proud,” she said.

Chopra’s uncle Bhim Chopra, who played a key role in shaping his career, agreed with his brother.

“God has answered our prayers.
“It is not only a player’s hard work and strong determination that counts, strong family support, constant encouragement and motivation and inculcating good values is important. Neeraj have all these which helped him pursue his aim,” Bhim Chopra said.

Even elderly women in the village and family have been dancing and singing after he had won a gold and heaped praise on the son-of-the-soil for making India proud.     People from far and wide have been reaching the family’s house to congratulate them.

Satish said his son developed interest in javelin from some of his associates in Panipat’s Shivaji stadium.

“Later, he developed interest in the sport and he started doing well. He always focused only on javelin and remained firm on pursuing the sport, he said.

Satish said had he been alive, the legendary Milkha Singh would have been proud of his son.

"We wish Milkha ji was alive and amongst us today, he would have been so happy and proud,” he said.

Uncle Bhim added for the last 10 years Chopra had followed a strict diet but once he rrturns home the family will now let him relish his favourite dishes.

On Saturday, Chopra’s family had put up a giant screen outside their home to enable all those from the neighbourhood, including children and a battery of mediapersons, who had gathered there, to watch the live action of his event from Tokyo.

Satish said he was confident that his son would win a medal, but was not sure about the colour of the medal.

Chopra had shattered several glass ceilings to become the country’s first gold-medallist in 13 years, his stupendous show making it the best ever Games for a nation starved for success at the grandest sporting spectacle.

At 23, he joined Abhinav Bindra in the select gold club but beat him on age as the latter was 25 when he claimed the top prize in the 2008 Beijing Games.

You are all winners and role models, PM Modi tells Tokyo-bound para athletes