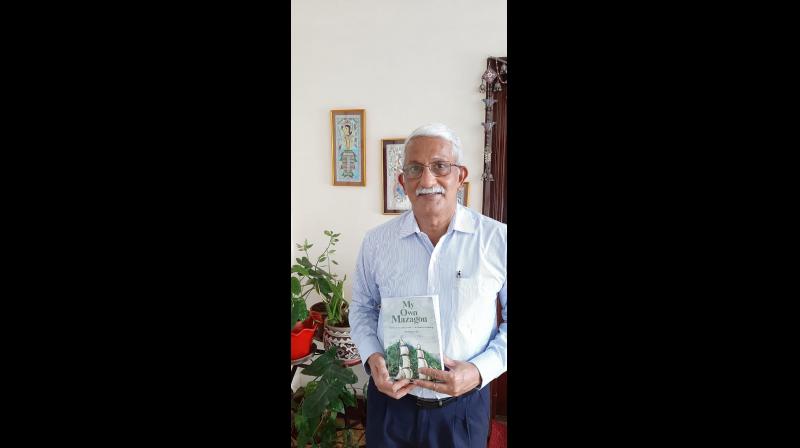 Mazagon, once an island inhabited by Kolis, Bhandaris and Agris, fetched the Portuguese the highest revenue among all the islands of Bombay when it was under their control. It subsequently fell into British hands through a disputed dowry deed. Mazagon retained its identity as an island for many years, with its own fort, dock, churches and even a gunpowder factory. My Own Mazagon: The History of a Little Island in the Bombay Archipelago by Capt. Ramesh Babu encapsulates the forgotten history of Mazagon and resurrects the identity of Maza Gaon or ‘My own Village’.
Talking about the inspiration for the book, Capt. Ramesh says, “I have worked and lived in Mumbai for almost 30 years of my 40-year career as an Engineer, first in the Navy (for 25 years) and then at Mazagon Dock (for almost 15 years). I retired from Mazagon Dock on 31 July, and bid farewell to Mumbai. I wanted to make a parting gift to this historic city.” He felt a book on one of the city’s historical precincts would fit the bill beautifully.

“I chose Mazagon, as this historic island has been largely ignored by chroniclers of Bombay. It is also the place that I have walked around the most, discovering, for almost 15 years. Thus came about My own Mazagon,” he explains.
Writing this sort of a book requires a lot of research. And Capt. Ramesh has the right background for it. “History has been with me right from my childhood, as my grandmother put me to sleep with bedtime stories on the history of Travancore and India. I was also fortunate to learn history at school from a wonderful teacher. Years later, as a PG student at Bombay IIT, I had to do an extensive ‘literature survey’, to write my thesis and project reports. Since then, exploring books, especially history, has been a hobby,” he shares.

He worked on the history of Mazagon Dock and Trincomalee, and published a book titled ‘Calicut Heritage Trails’ at the Kerala Literature Festival in 2020. “I found flashes on the history of Mazagon when I was editing a coffee table book for Mazagon Dock in 2010. That got me interested,” he says. “I picked up more books on Bombay, but only found passing mention of Mazagon in them. But these books had references from some 18th, 19th and early 20th century books and documents. I used the internet to access them, as they are scanned and preserved in libraries and archives from Bombay to Scotland.”

Ironically, COVID-19 also had a part to play in the book becoming a reality. “As one of the early victims of the pandemic, I was quarantined with mild symptoms in May-June 2020, allowing me enough time to start the manuscript,” says Capt. Ramesh. “Thanks to the prolonged lockdown, I could complete most of the draft manuscript. So, in a way, My own Mazagon is a creature of the Covid-19 pandemic!”

He has used inputs from well-known historians, architects, town planners, priests, teachers, shop owners and others in the book.
“The most interesting part of making the book was to remotely guide a group of young architects, three of them in Kerala and one in Jaipur, to prepare sketches and maps, without actually visiting Mazagon. They have done a wonderful job,” the author says. “It was a long and involved process. It took almost eight years on the whole.”

The book chronicles several surprising discoveries the author made while exploring every nook and corner of Mazagon – for example, the six Portuguese graves under the floor of Rosary Church exposed during renovation efforts. “One of them, dated April 1795, belonging to Senorita Roza Nesbet, has been renovated and conserved by the church. Another is the discovery of a tip of the lost Henry Fountain in a grassy patch near the Mazagon Castle bus stop, about two km away from the original spot, based on a photograph shared by historian Deepak Rao,” Capt. Ramesh says. “The remnants of volcanic rock, still worshipped at the Ghodapdeo Temple, part of the original geological phenomenon that made the Bombay archipelago, is another interesting find.”
Asked what his next project would be, Capt. Ramesh says, “It could be anything from an anthology of stories set in my Kerala village to exploits of Bombay-built battleships that crafted maritime history. Right now, I am basking in the positive response generated by My own Mazagon, and sitting by my mother’s side to catch up on some 50 years that I was away from her.”

Relationships: What causes ‘the ick’ and can you ever get past it?

When COVID keeps ‘Mahabali’ away from visiting his ‘subjects’ during Onam