Hello, dear readers and homemade products!
Half a year has passed since I bought myself one of the most common models of 3D printers – Ender 3 from the Chinese company Creality.
This model prints pretty well out of the box, and you can safely recommend to any newbie. This model is also purchased by professionals to create farms.
There are also its older brothers – Ender3 Pro and Ender3 V2. In both, the horizontal Y-axis rail has been replaced from a 20 × 40 profile to a 40 × 40 mm profile, and a better power supply is installed.
In the V2 version, the screen is replaced with a “touch” one, which worsens the printer's functionality, in comparison with the classic LCD12864.
In this article I will tell you what improvements I have installed, in particular about the attachment of the 3DTouch (BLTouch) automatic alignment sensor of our own design.
Materials required for DIY.
– Motherboard BTT SKR E3 Turbo TMC2209
– BMG Wind V6 DD (Mellow)
– 3DTouch V3 Trianglelab
– Nozzles brass NF V6
– Nozzles V6 brass Trianglelab
– Filament eSUN PETG
– Filament for 3D printing PLA ABS.
Tools used by the author.
– Creality Ender 3 3D printer
– Dremel – Mechanical hour indicator – – Digital caliper.
Printer history.
3D printer Ender 3 was purchased in stock form on Ali. The first two months I learned to print and model, I studied the possibilities of increasing the print speed.
It is worth starting with the stock version if you have a limited budget, or want to study 3D printing in detail. If you need a combat, fast enough, and almost omnivorous machine, then you can install the same modifications as I did (which will also be discussed in the article). 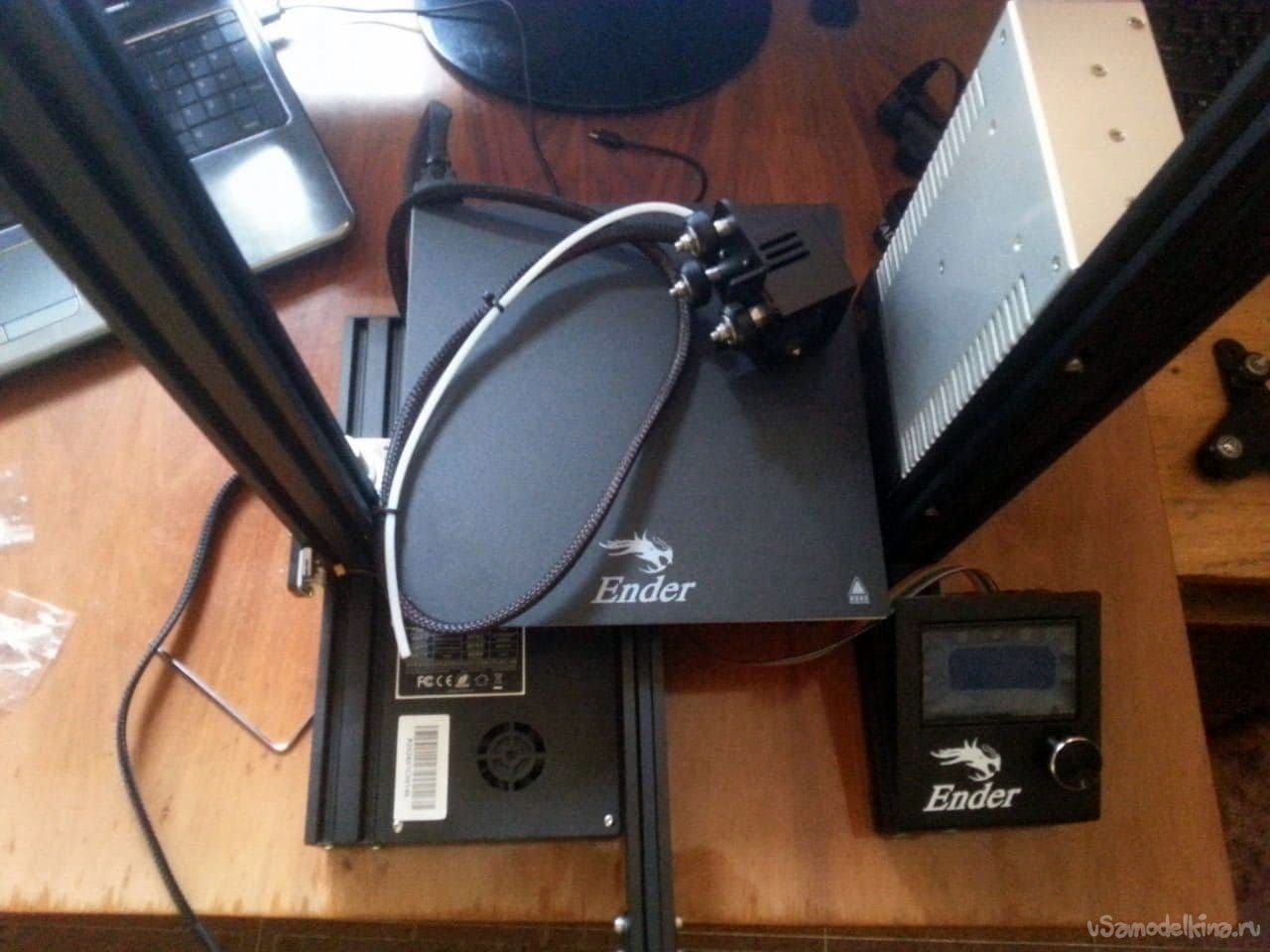 I am modeling in the Fusion360 software package – it is convenient and free for home use.
You will find excellent modeling lessons in it on the Uncle Pasha YouTube channel.
The stock head with the MK8 hoten is already a very outdated solution, and even implemented with a remote filament feeding system (through a Bowden extension tube). The length of the “rollback” (the return of the plastic to move the head between the individual elements without leakage thereof) was as much as 6.4 mm. This greatly reduces the speed, and makes it impossible to print flexible (rubbery) plastics.
Also, with such a feed, it makes no sense to turn on one of the important mechanisms for optimizing plastic feed – LinearAdvance, however, the complete motherboard does not support it either. As a result, printing at a relatively low speed, or violations of the geometry of products in the form of bulging corners, etc.
First of all, a new motherboard with quiet drivers TMC2209 – SKR E3 Turbo from BigTreeTech. It already has a fast 120MHz 32-bit LPC1769 processor. For flashing, you can use a microSD card (instead of dancing with an arduino or a wire with an adapter).
It is also possible to connect a second extruder to the board.
After replacing the board and flashing it to Marlin 2.X, the noise from the stepper motors became almost imperceptible. The board replaces the old one without any modifications with a file – it was specially made for this model by another company, which directly speaks of the popularity of the Ender3 printer. .
To begin with, I implemented the “homeless option” by printing out the mounting panel and installing my own feeder on the carriage (a stepper motor with gears that feeds plastic). It is quite heavy, and adds as much as 330 grams to the total weight of the head with carriage. Despite the heavy weight of the X-axis carriage, it is still more than half the weight of the table (Y-axis). So the table, not the head, will “rest against” the limits on acceleration and speed of movement.
As a result, the retraction on such a head with an almost direct plastic feed became four times shorter – 1.6 mm versus 6.4 mm on Bowden. You can already try to print with rubber-like plastic.
Calibration of the rollback length and speed of movement of the plastic can be quickly done with the following test .
There is also a large set of basic calibrations, which you can find at the following link . 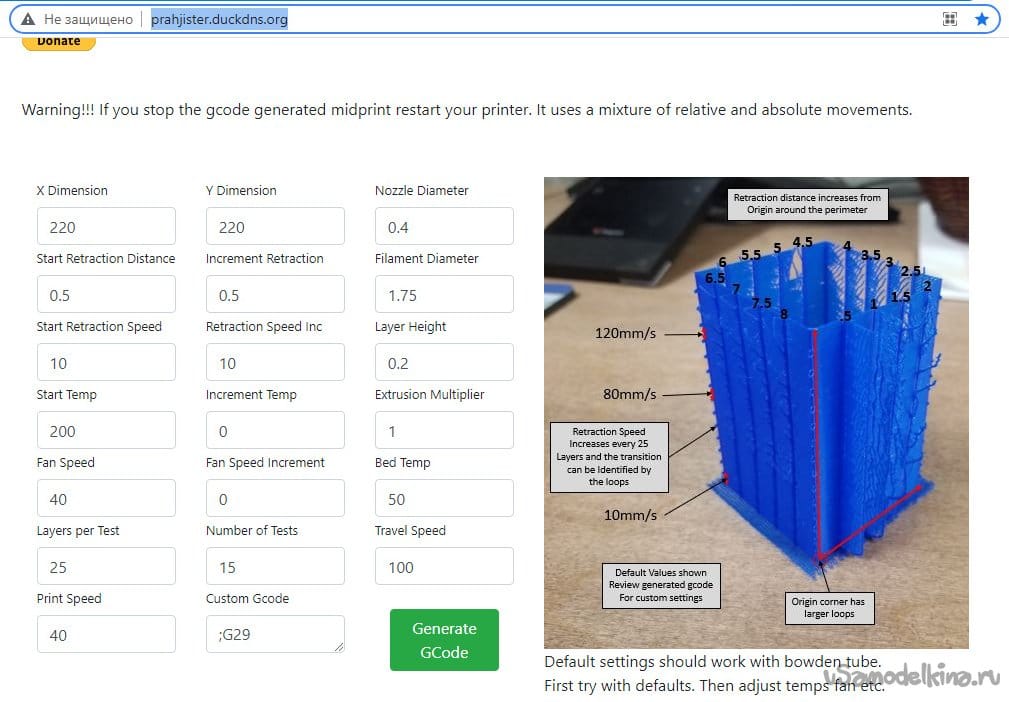 Now my hands got to the point of installing a new printhead, and I chose the BMG Wind V6 from the Mellow company. There are two versions of this head – left and right (according to the location of the feeder stepper motor).
I don’t know for what reason, but the right version is more popular, and quite a lot of ready-made body kits have been developed for it.
I chose the left version ( with the V6 hot-end), because with it the weight distribution of the carriage is much better, and there is less stress on the bearings and rollers of OpenBuilds.
This is already a full-fledged head with direct plastic feed. It combines the feeder and the cooling part in one unit. Excellent grip is provided by two gears at once (DualDrive). The final weight of the head with motor and hot end is only 230 grams.
As a result – 0.7 mm retraction for PETg plastic and LA coefficient (K-factor) 0.05!
brass nozzles V6 were ordered with the head0.2-0.8 mm. The quality is approximately the same as that of the V6 nozzles from Trianglelab .
You can forget about the complete nozzles from the printer – it is still “pleasure” to print on them. 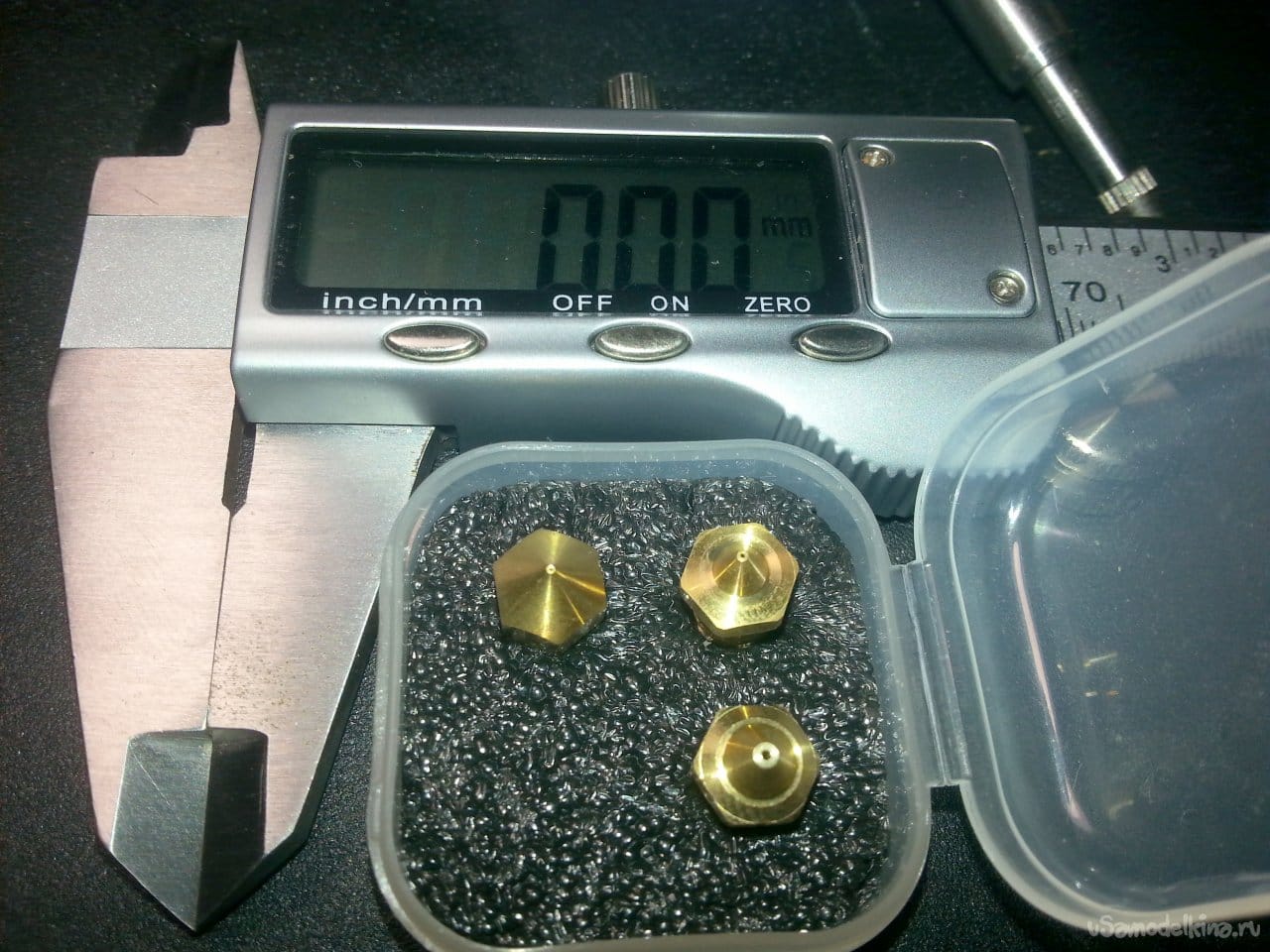 With all the advantages of this head, it has only two holes for fastening, and they are designed specifically for the BLTouch sensor. Accordingly, there is nowhere to hang a fan with nozzles for blowing the model.
People get out of this situation in different ways: basically, an additional plate is installed between the stepping motor and the head unit, and a sensor and/or fans are already attached to it.
This solution, albeit slightly, but increases the overall width of the head by shifting engine to the side. In the case of the head in the left version, there is a great risk of running into the protective cover of the X-axis limit switch.
I already had to cut off a number of fins of the cooling radiator of the stepper with a dremel , this can be seen in the photo. 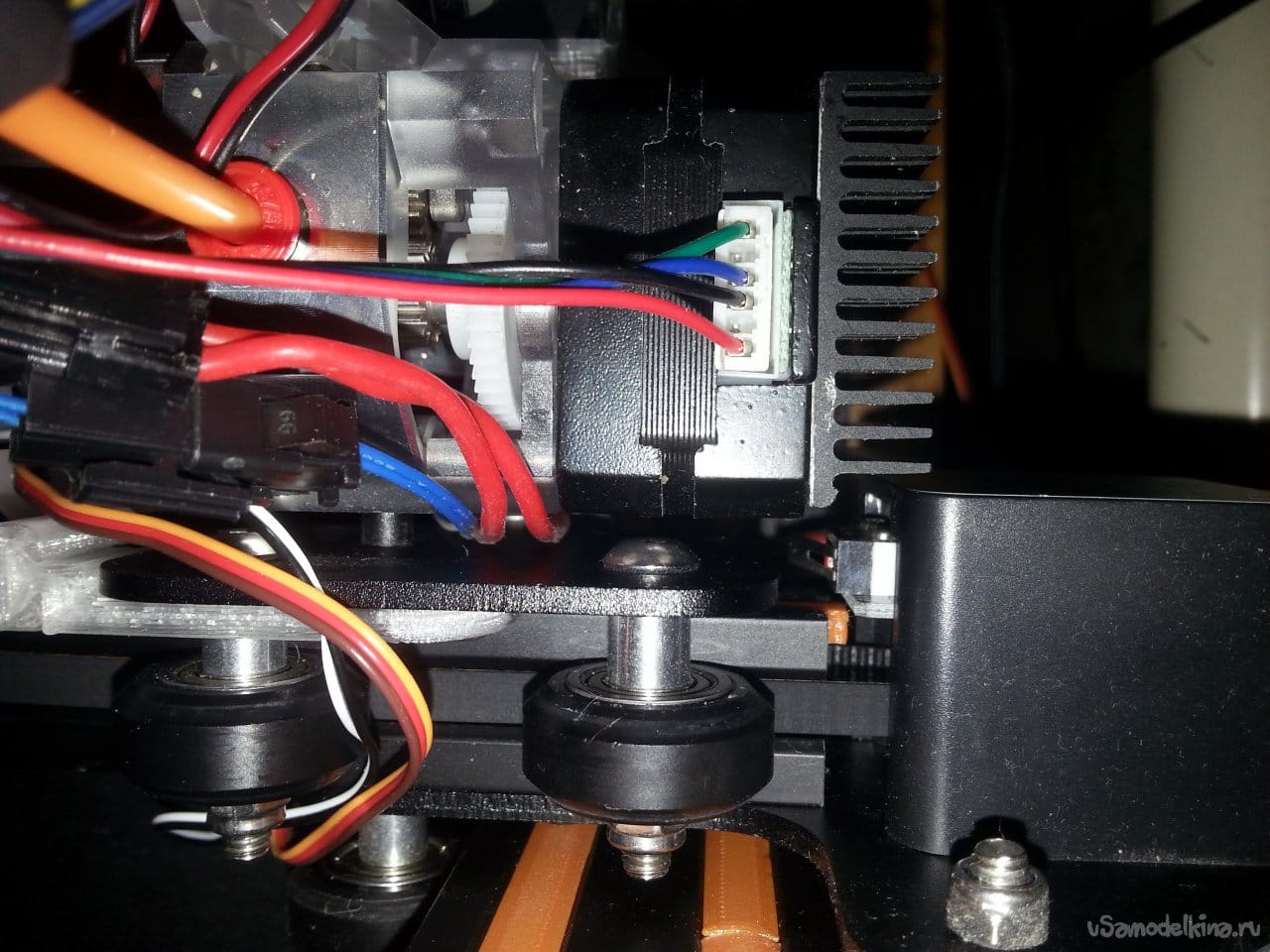 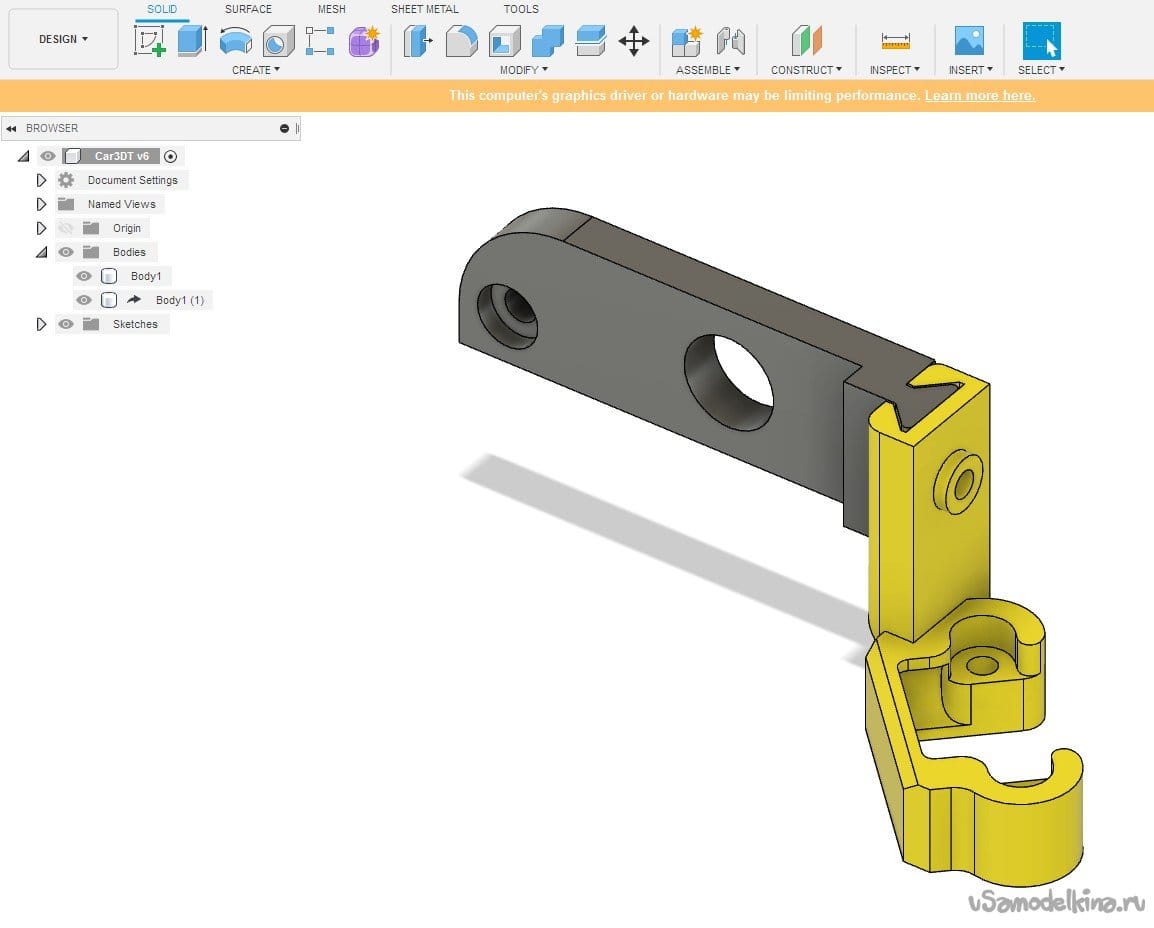 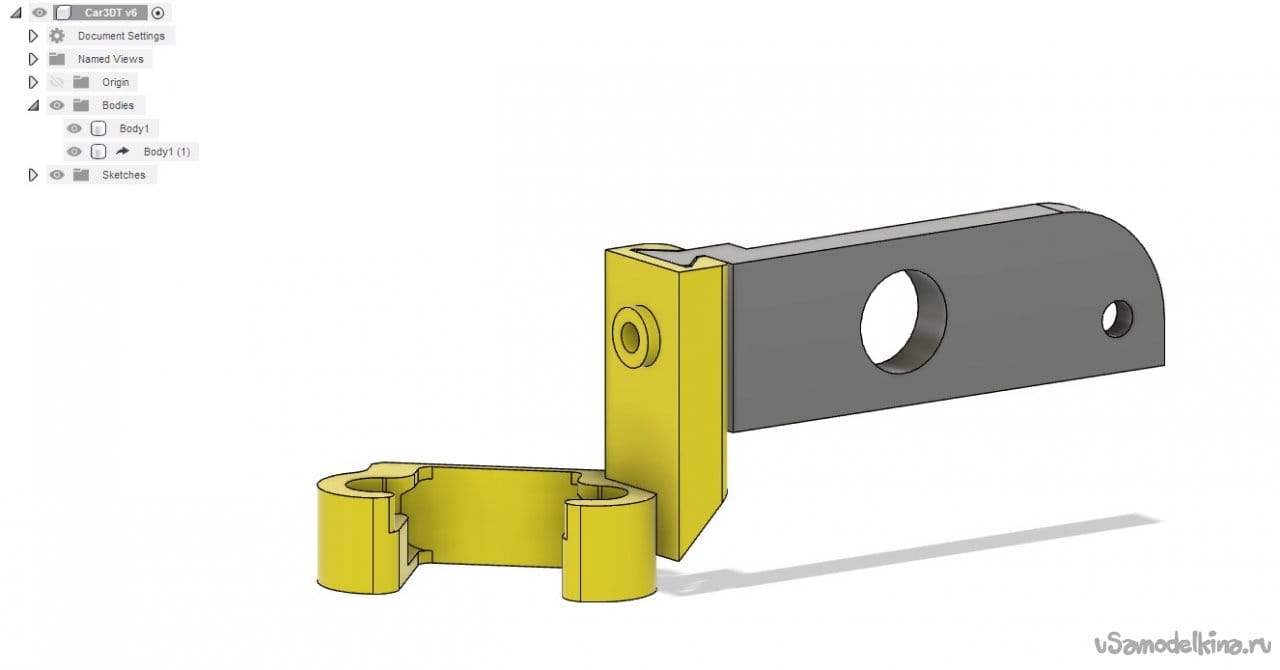 I used a dovetail joint. The technological gap has been specially made for printing defects. 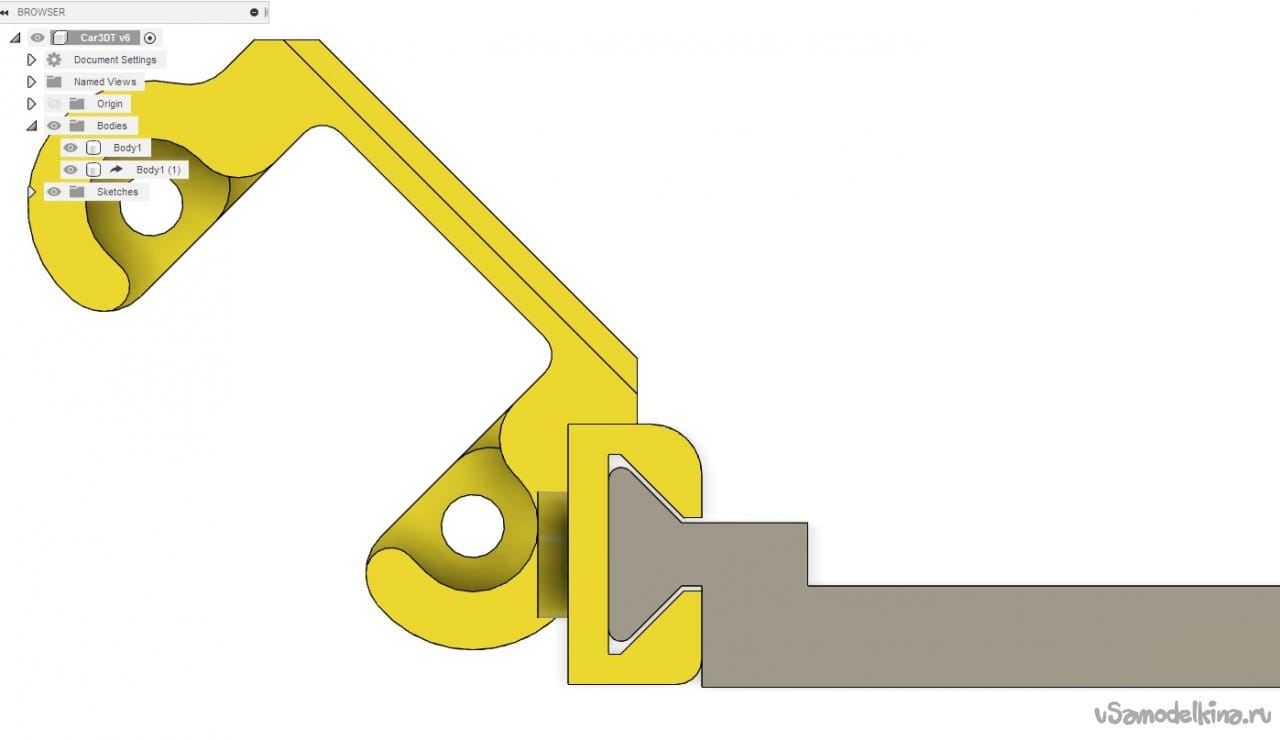 Both models are printed vertically separately.
No support required, for which there is a 45 degree bevel at the bottom of the moving part.
Details printed transparent PETG plastic , this is a version without adjustments made to the models. 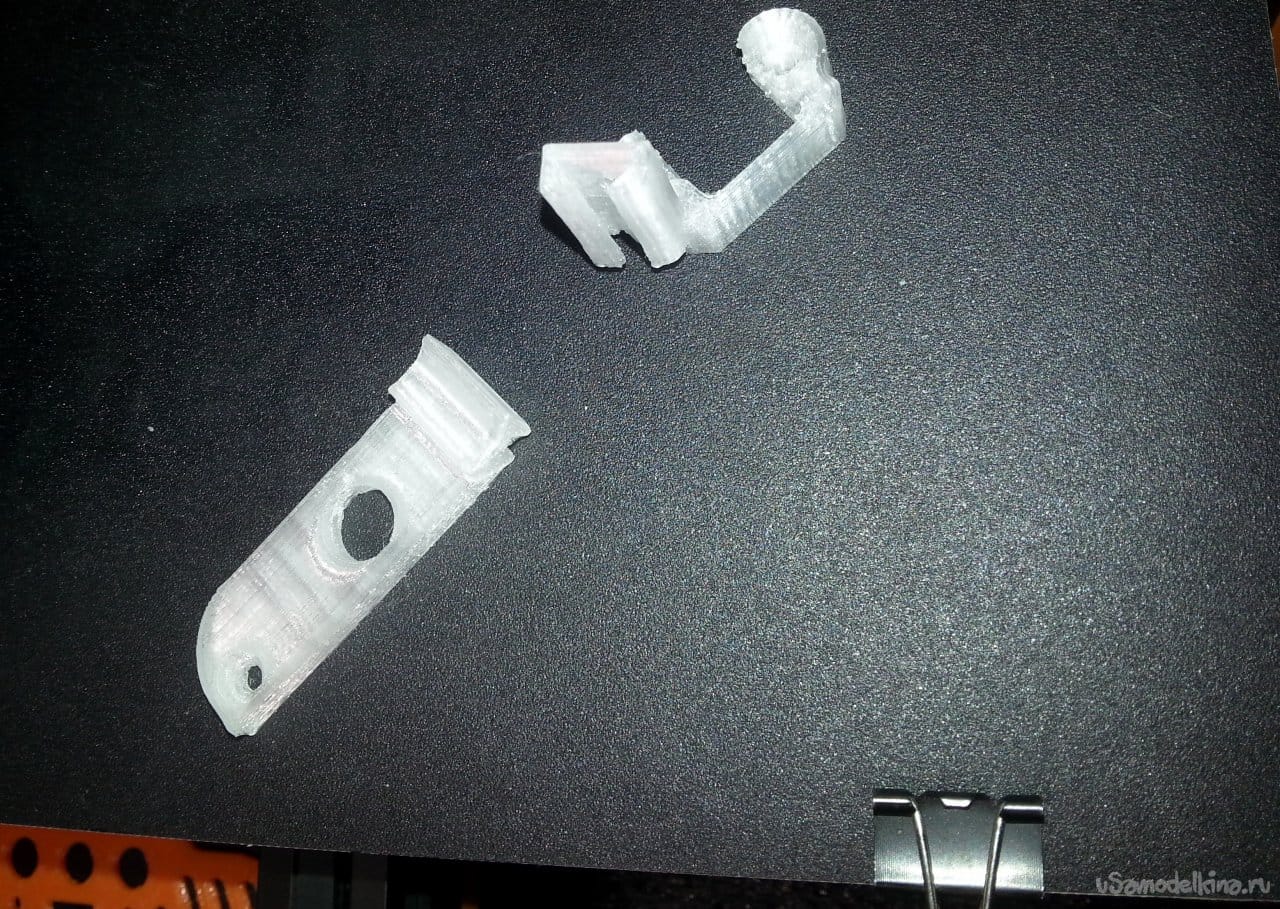 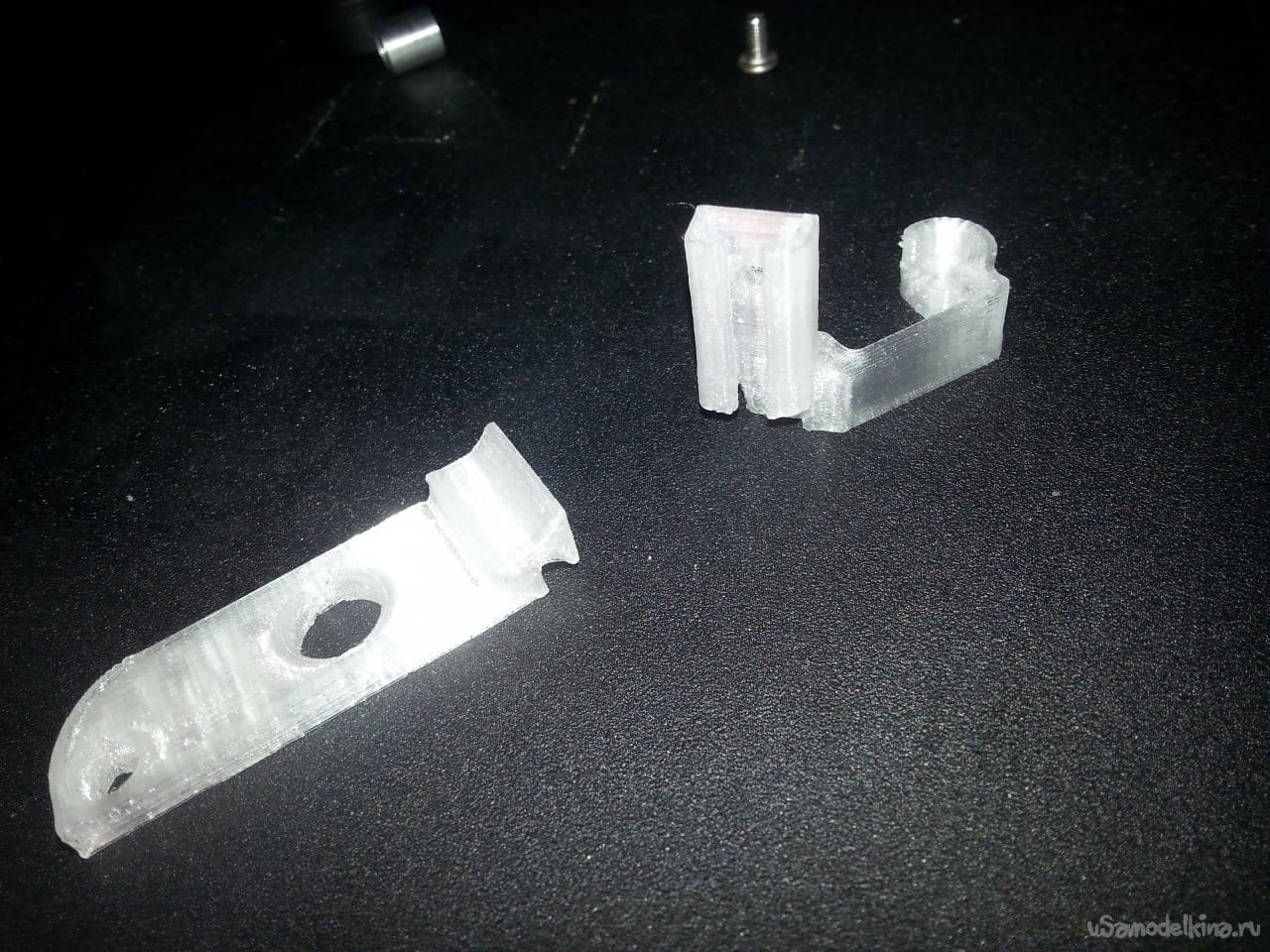 First of all, I unscrewed the upper right roller of the carriage, and removed it. The sleeve is inserted into the large (8 mm) hole in the adapter plate. 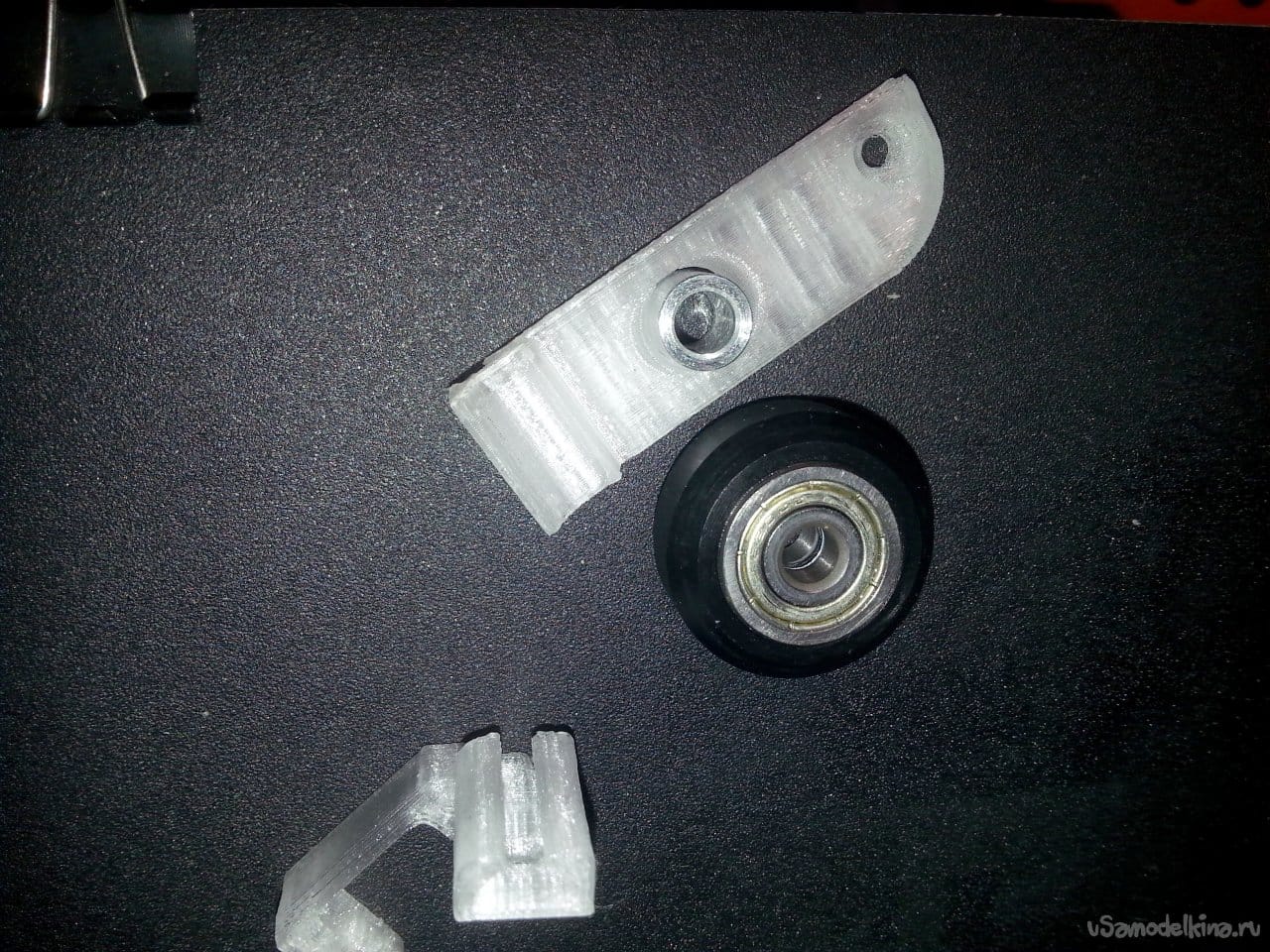 A screw is screwed through a small hole (3 mm), which used to fasten the head cover. It fixes the plate to the carriage.
It remains to screw on the sensor from the bottom side. So far, I have secured it with the supplied screws. Springs are not needed here – the fastening is rigid, and the adjustment is carried out without them.
I will not write about the sensor adjustment yet, this topic is discussed in detail on the channels of Dmitry Sorkin and Sergey Irbis. 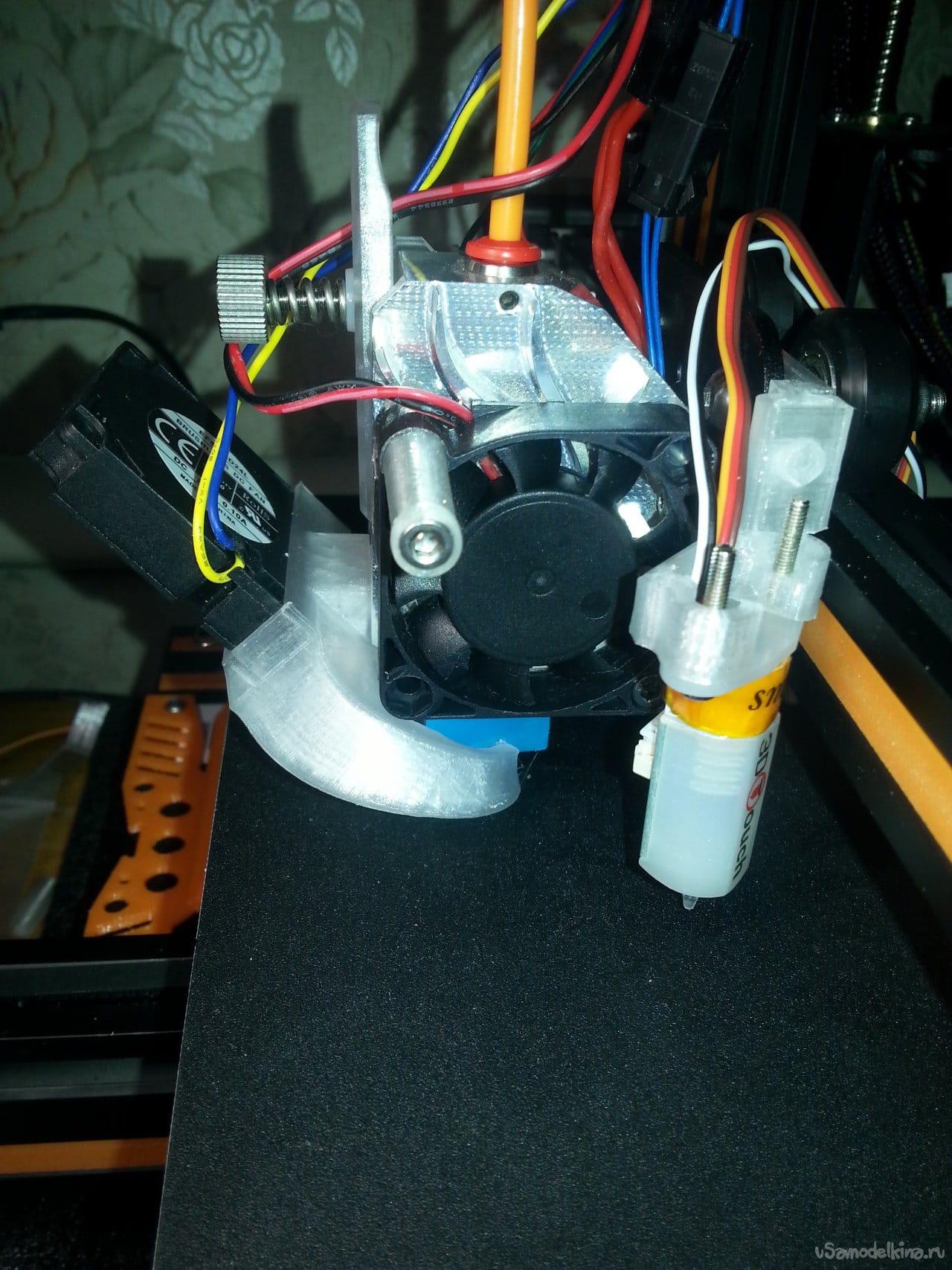 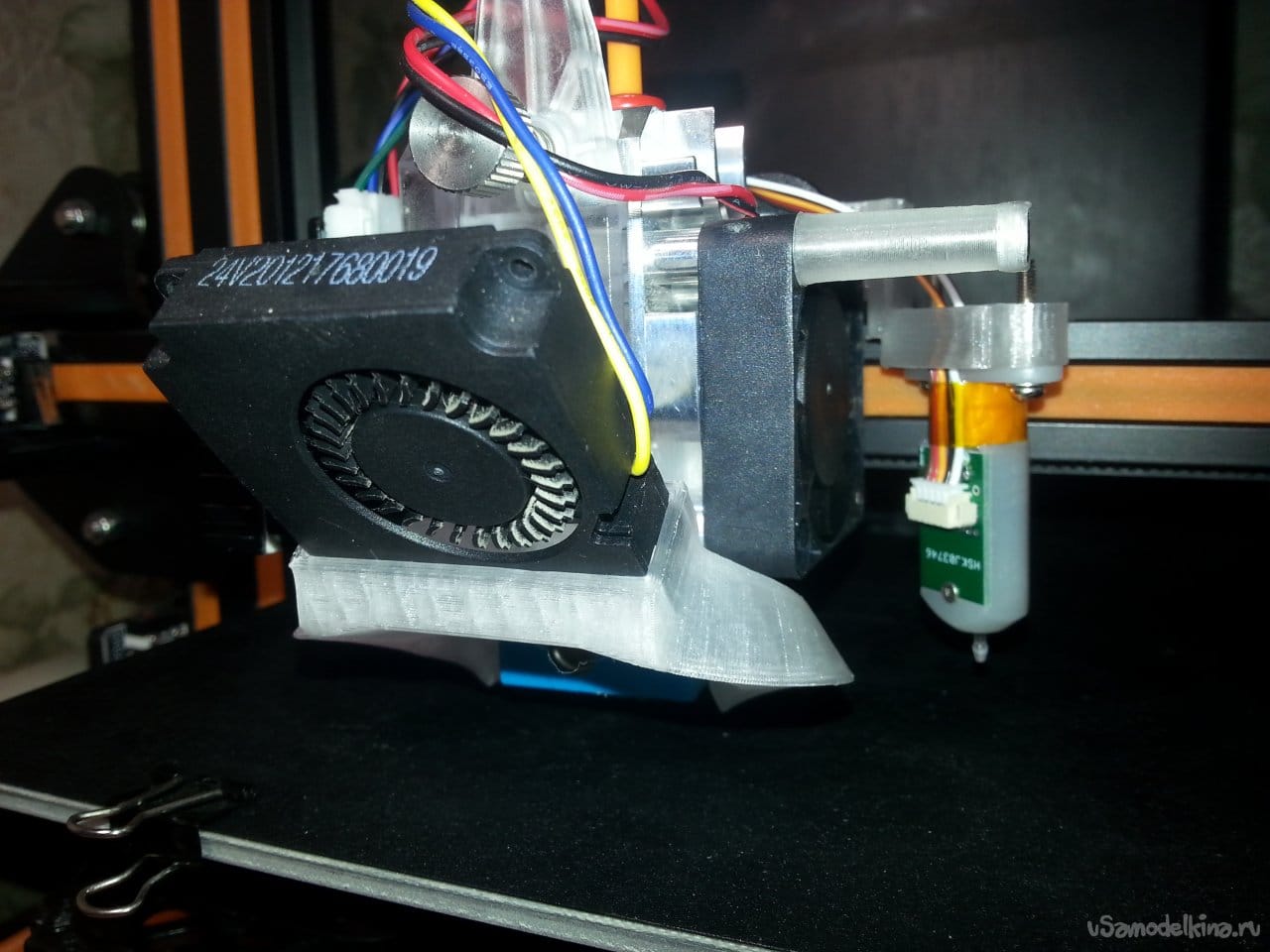 By the way, the hour indicator is attached to the tricky conical pin sticking out of the fan. This is also a good helper for adjusting the level of the table.
And without a caliper , you don't have to approach modeling. 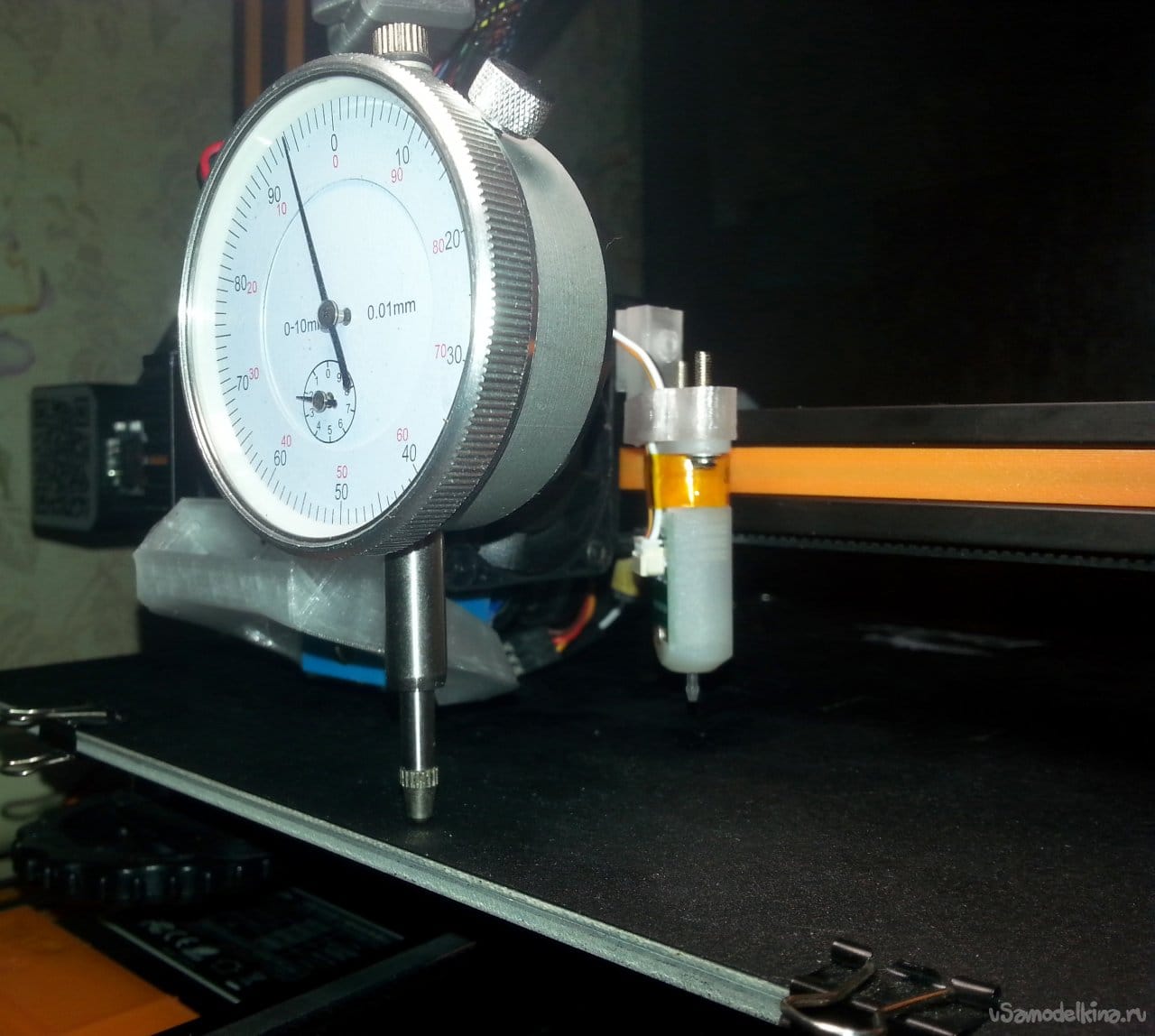 I posted the models for printing in STL format on the popular Thingiverse website, you can find them at the following link .
For those who want to remake the model – write comments, I will reset the originals (.step) for Fusion360.
All good mood, good health, and interesting ideas!
Subscribe to the telegram channel of the site, so as not to miss new articles.

Swing balance weights (scales) do it yourself