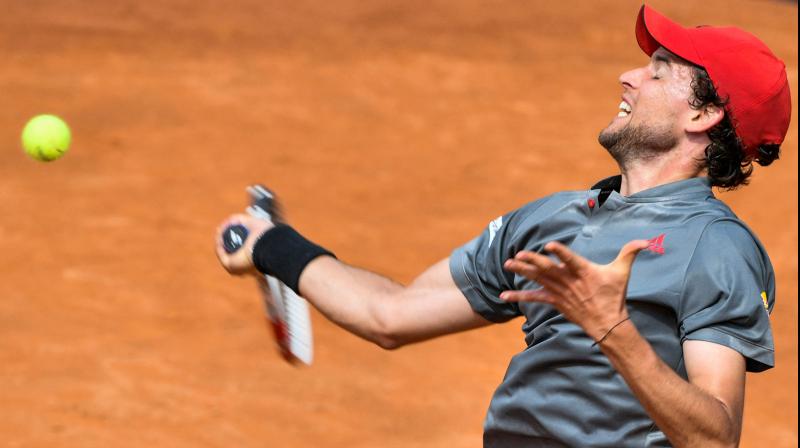 Paris: Defending champion Dominic Thiem announced on social media on Wednesday the "tough decision" to pull out of this month's US Open after failing to recover sufficiently from a wrist injury he picked up in Mallorca in June.

The 27-year-old Austrian, who will also miss the remainder of the 2021 season, said he had been making a good recovery before feeling renewed pain last week.

"Unfortunately, I've had to withdraw from the US Open and will miss the rest of the 2021 season," he posted on Twitter.

"I'm really disappointed not to be able to defend the title in New York but I haven't recovered from the wrist injury I suffered back in June at the Mallorca Open.

"The past six weeks, I've been following medical advice, wearing the wrist splint, doing exercise to stay in shape before starting to train back on the courts.

"My recovery was going really well but then last week I hit a ball during training and started to feel some pain again. I went straight to see the doctors.

"After some tests, they said that my wrist needs more time, so we've agreed on being conservative and to give my wrist some time to recover. I'll wear the wrist splint for a couple more weeks before starting with exercises and then training with the racquet again.

"It has been a tough decision but I know this is what I have to do.

"I have a long career ahead of me nd it's important not to take risks and rush back."

The world number six went on to reach the quarter-finals of the delayed 2020 French Open and the final of the season-ending Masters in London.

However, he struggled with form this year, losing in straight sets to Grigor Dimitrov in the fourth round of the Australian Open.

He duly took a break from tennis to "recharge" and on his return reached the semi-finals in Madrid.

That was followed, however, by another defeat at Roland Garros where he lost in the first round after squandering a two-set lead against Pablo Andujar.

His wrist injury in Mallorca, where he had to abandon against Frenchman Adrian Mannarino, meant missing Wimbledon and the Tokyo Olympics.

On Sunday, another former champion Roger Federer also pulled out of the US Open.

The 40-year-old, who has five US Open titles to his name, said he needed further knee surgery and admitted he "will be out for many months".

The other two members of the "Big Three", Rafael Nadal and Novak Djokovic, are both absent from the ongoing Masters tournament in Cincinnati which traditionally serves as a dress rehearsal before the US Open.

The 35-year-old Nadal has been suffering from a left foot injury since his semi-final exit at the hands of Djokovic at the French Open in June.

The Serb, meanwhile, who has won all three majors this season and is eager to make a clean sweep in New York, has not taken to the court since the Tokyo Olympics, which he left mentally and physically exhausted after his losses in the semi-final and in the bronze medal match.