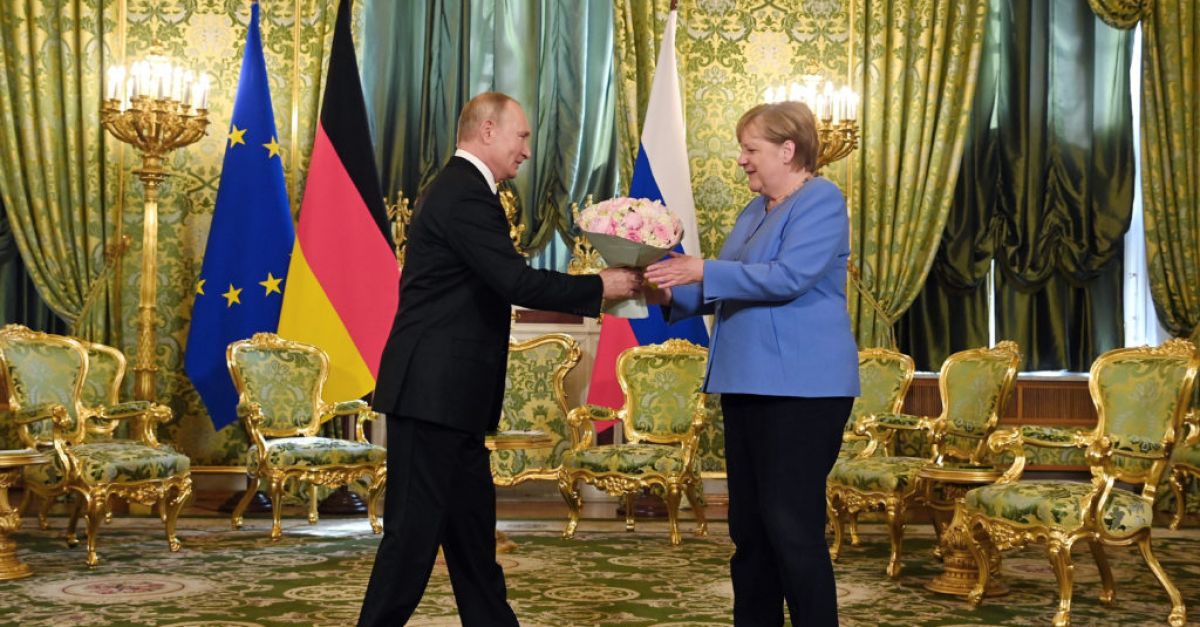 German Chancellor Angela Merkel travelled to Russia on Friday to discuss the crisis in Afghanistan, the separatist conflict in Ukraine and Moscow’s treatment of imprisoned Kremlin critic Alexei Navalny, among other issues.

Ms Merkel’s visit to Moscow comes as she is nearing the end of her almost 16-year-long leadership of Germany.

Despite sharp differences, she has maintained close contacts with Russian President Vladimir Putin, who has been in power for more than two decades.

“Even though we certainly have deep differences today, we speak to each other – and that should continue to happen,” Ms Merkel said as she sat down for talks with Putin in the Kremlin.

Mr Putin noted the importance of ties with Germany and hailed Ms Merkel’s role in developing them. “Germany is one of our key partners in Europe and the entire world thanks to your efforts over the past 16 years,” he said.

Before the talks, Ms Merkel laid flowers at the Unknown Soldier’s Tomb near the Kremlin wall to honour the Soviet victims of the Second World War.

High on the agenda of Friday’s talks is the situation in eastern Ukraine. Germany and France have sought to help broker a peaceful settlement to end the fighting between Ukrainian forces and Russia-backed separatists that has killed more than 14,000 since 2014.

Ms Merkel’s spokesman Steffen Seibert said earlier this week that “Russia could do much more” to help the settlement.

Ms Merkel plans to travel back to Berlin on Friday night and head to Kyiv on Sunday to meet with Ukrainian President Volodymyr Zelenskyy.

Mr Seibert noted that Friday’s talks will also touch on the situation in Russia’s ally Belarus, where authoritarian President Alexander Lukashenko has unleashed a sweeping crackdown on dissent. That followed protests against his re-election for a sixth term in an August 2020 vote which the opposition and the West denounced as rigged.

Ms Merkel visited Russia on the anniversary of Mr Navalny’s falling gravely ill on a plane over Siberia on August 20 2020. At his wife’s insistence, he was flown for medical treatment to Germany, where officials said tests revealed he had been poisoned with a Soviet-developed nerve agent.

Mr Navalny, who is Putin’s most outspoken critic, spent five months in Germany recuperating from the poisoning that he blamed on the Kremlin — an accusation that Russian authorities reject.

Upon his return to Russia in January, Mr Navalny was immediately arrested and a month later received a two-and-a-half-year prison sentence for violating the terms of a suspended sentence from a 2014 embezzlement conviction that he dismissed as politically motivated.

“This still unsolved case is putting a very severe burden on the relationship with Russia,” Mr Seibert said. “Mr Navalny is wrongfully imprisoned.”

Earlier this week, Russia’s Foreign Ministry rejected accusations over Mr Navalny’s poisoning as a “planned provocation” by the West to discredit Russia.

Ms Merkel, 67, who grew up in communist East Germany and is fluent in Russian, has always stressed that relations with Russia can only improve through dialogue.

Her visit to Moscow could be one of her last trips abroad as chancellor since she is not running in Germany’s national election next month. It is not clear when she will step down, because the outgoing government remains in place until a new one is formed, a process that could drag on for months.