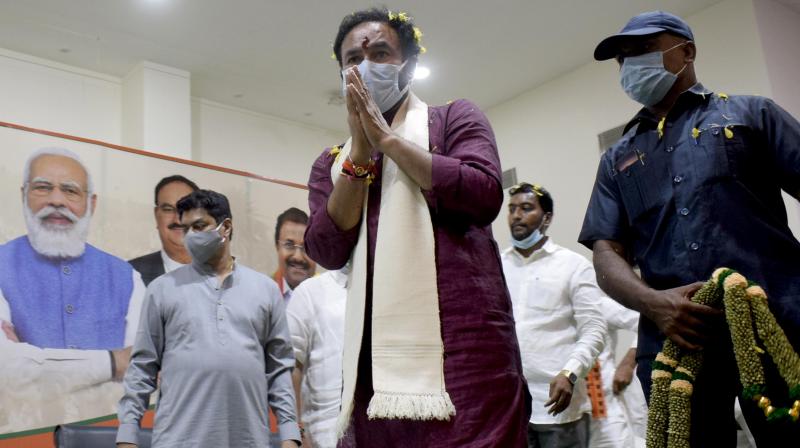 VIJAYAWADA: Union minister for tourism and culture G. Kishan Reddy went down the memory lane while recalling his association with the city during his youthful days by saying that he was an ordinary party worker since 1980 and used to visit the party office in a rickshaw and stayed there for months.

He was accorded a rousing reception when he arrived for the Jana Ashirvad Yatra here on Thursday.

Addressing party leaders and supporters on his maiden visit since becoming a Cabinet minister, he said that all those who secured a place in the Union Cabinet were taking out Jana Ashirvad Yatra in their respective states.

He said “Having worked as an in-charge of Krishna district, I personally know our activists and I have come here to meet all our leaders and supporters. I only chant two slogans-Bharat Mata Ki Jai and Kashmir Hindustan Ka Nahi Tho Kiske Baap Ka hai.’”

The Union minister said that scrapping Article 370 was a major incident in his life as the party could not do so earlier for want of majority in Parliament.

He dwelt at length about a series of welfare and developmental programmes being initiated by the Union Government. He credited Prime Minister Narendra Modi for helping India become one of only four nations to develop Covid vaccine and that too before the US, Germany or Japan could.

Reddy opined that political parties, which depended on one family or an individual, would never be accountable to the people, whereas the BJP was a party whose strength was the activists.

Maintaining that the Centre was making all efforts to further develop Andhra Pradesh, he slammed some political parties for misguiding people against the BJP government at the Centre.

The minister assured the intervention of the Centre in bringing an end to differences between Andhra Pradesh and Telangana on water sharing.

He criticized the state government for targetting BJP activists when they question the corrupt administration.

Nobody should go bankrupt for COVID-19 treatment. Even anti-vaxxers.

Taliban at presidential palace to negotiate transfer of power