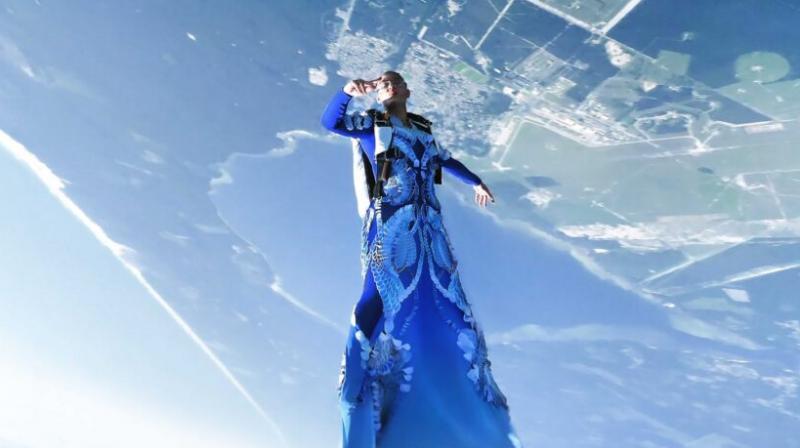 Domitille Kiger has given a new meaning to flying high in the world of fashion. The sky-diving sensation plunged 13,000 feet at a speed of 300 km per hour, not in the conventional suit that skydivers use, but in a stunning designer gown by Iris van Herpen.
The dramatic retelling of ‘Earthrise’ for van Herpen’s Haute Couture Autumn Winter 2021-22 collection presented at the Paris Fashion Week, assumes specific significance for India when Domitille reveals her middle name – Lakshmi!
In an exclusive chat with Deccan Chronicle, the Paris-born Domitille talks about her feat which took the fashion world by storm.
“It started around May, when Dutch fashion designer Iris van Herpen, who wished to showcase a collection of dresses themed on movement, air, and spectacular scenery, contracted me. Iris had a vision of one of her dresses being flown in free-fly,” says Domitille.
The skydiver says she had never jumped in a dress before, but some of her friends had.   “One of my friends, Roberta Mancino, gave me insights, explained in detail,” she shares.

Wondering how the outfit would withstand travelling head-down from the clouds at high speed, and many other variables, Domitille worked on the project for a full three months, before she finally took the plunge, literally and figuratively.
Domitille met Iris’s team in Amsterdam, and went to City Skydive Wind tunnel in Utrecht, where they made a suit using lots of different fabrics to see how they held together in the tunnel, and how they looked in the wind. “Most of them fell to pieces! It was good for the team to see with their own eyes what the wind can do. It’s not so easy to explain to someone who’s not part of our world how fabric behaves in the sky,” says Domitille. “I kept stressing the need to make the dress stronger than they could possibly imagine so that it wouldn’t come apart in freefall.”

The prototype was over twice the length of a normal gown. Under the voluminous skirt Domitille wore trainers and leggings! “It was a bit scary, as I planned to try the prototype with my wingsuit canopy, Valkyrie 79. It opened great. The final dress was stitched with additional support. The dress was sewn to my leggings at the knees, so it would not ride up and engulf under canopy,” she elaborates.
She says “I made four jumps with the full-on Iris Van Herpen gown in early June, flying with Alex Aimard to get the footage.” Flying head-down in the dress was relatively easy, according to her, but going for ‘belly’ was “kind of interesting”, with masses of extra fabric beyond her feet. Landing was straightforward, as the dress blew out of the way behind her.

The French skydiver felt a bit nervous jumping for the first time in the dress. “But of course it was fine. I guess after 9,000 skydives you have that pretty dialled-in,” says the 36-year-old.
Domitille, who has spent a lot of her life leaping out of planes, says, “My middle name is Lakshmi. It was given to me by my father. He travelled many times to India when he was younger, sometimes for work, sometimes for the pleasure of discovering India’s beauty and culture. In my home in Paris, there was many Indian paintings and sculptures, and my dad showed me pictures he took, and told me about Indian culture.”

When she was 20, she came to Rajasthan, for an internship with French artist Nadine LePrince. “I spent 6 months in Fatehpur, Shekawati, at Nadine’s Haveli. A piece of my heart will always be in India. It was a formative journey for me, a crossroads at teenage hood and adulthood, and it will always be a very special place for me,” she adds. Last year, she came back with her partner, and was happy to see what Joel Cadiou, Nadine’s son, a French photographer, had done with the haveli. “I can’t wait to come back and see everyone again,” she signs off.

A walk down history’s avenues