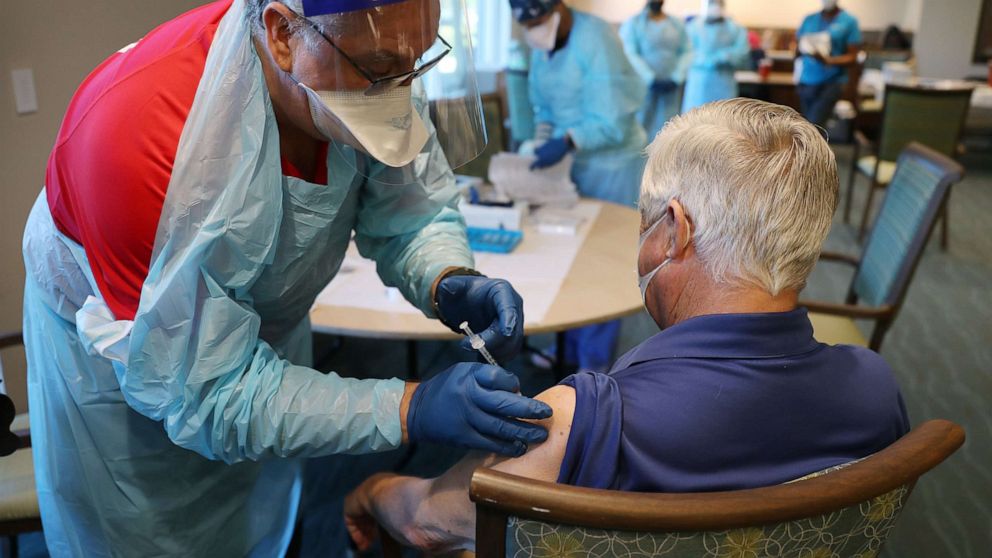 Labor shortages across the country are fueling a competition among long-term care facilities to retain and hire staff as they grapple with the delta variant.

With U.S. job openings hitting a record high of 9.2 million, nursing homes and other long-term care facilities are losing staff to other industries, or to other nursing facilities that can offer higher wages and better benefits, long-term care advocates and health care associations tell ABC News.

Staff shortages among nursing homes are not new. But advocates say the combination of the coronavirus pandemic, a general labor shortage, and a looming vaccine mandate for many long-term care facilities is making it even more difficult to keep staff.

Many facilities are raising their pay as a result — which in turn has increased competition.

“You have places offering a starting rate of $19 or $20 with huge sign-up bonuses of thousands of dollars,” said Paul Liistro, CEO of Manchester Manor and Vernon Manor nursing homes in Connecticut. In contrast, Liistro said, his facilities are on a three-year track to provide certified nursing assistants a $20 hourly wage.

In May 2020, the median annual wage for long-term care nursing assistants — most of whom work full-time — was $30,120, according to the U.S. Bureau of Labor Statistics.

Liistro told ABC News that for a brief period of time at the start of the pandemic, some nursing homes were able to raise staff salaries after receiving federal and state coronavirus relief funds. But Liistro said with that aid no longer available, his facilities can’t keep up with the competitive wages being offered in other places.

And Liistro said he expects to see some resignations due to the upcoming mandate that will require his staffers to either get vaccinated or be tested regularly.

On Wednesday, the Biden administration announced that it will require nursing home staffs be vaccinated against COVID-19 as a condition for those facilities to continue receiving federal Medicare and Medicaid funding. The latest move by the White House is already receiving pushback from advocates who say the decision will only lead to more staff shortages.

“Focusing only on nursing homes will cause vaccine-hesitant workers to flee to other health care providers and leave many centers without adequate staff to care for residents,” said Mark Parkinson, president and CEO of the American Health Care Association and National Center for Assisted Living, which represents more than 14,000 nursing homes. “It will make an already difficult workforce shortage even worse. The net effect of this action will be the opposite of its intent, and it will affect the ability to provide quality care to our residents.”

Nationwide vaccination rates among nursing home staff members are lagging far behind residents. According to the American Association of Retired Persons, 78% of long-term care facility residents are fully vaccinated — while staff vaccinations are only at 56.7%

Liistro told ABC News that his staff continues to express concerns about the safety and efficacy of the vaccine, despite nursing home cases and deaths plummeting after they were prioritized for the vaccine.

“We have about 125 unvaccinated people,” Liistro said of his staff. “My guess is that 80% are going to get vaccinated, 10% will get exemptions and the other 10% will leave.”

“But,” he said, “I’m confident we will find people who want to work in a safe environment with employers who are doing the right thing.”

At John Knox Village, an independent 430-bed nursing facility located in a Kansas City suburb, managers say they’re seeing competition from beyond the health care industry. On top of losing nurses and certified nursing assistants to other nursing homes and hospitals offering higher salaries, the facility recently lost its long-time housekeeper to a warehouse job that offered an additional $3 an hour.

John Knox Village spokesperson Emily Banyas said that last year, the facility raised wages to between $11-$12 an hour for certified nursing assistants in order to remain competitive with stores like Target and Walmart. But recently the big-box stores raised their wages yet again, and are offering added benefits like college tuition and moving expenses.

Most of the 310 Florida nursing homes and 23 assisted living facilities questioned last month by the Florida Health Care Association reported they are facing staff challenges.

As a result, said FHCA spokesperson Kristen Knapp, many Florida facilities are having to pay temporary staffing agencies to fill positions. That, in turn, has cost facilities in the state an additional $22.7 million, according to the Agency for Health Care Administration.

Knapp also said that some facilities have been unable to take on new patients because they lack the necessary staff.

In Pennsylvania, the long-term care workforce crisis has “spiraled out of control,” said Zach Shamberg, president and CEO of the Pennsylvania Health Care Association.

Like in Florida, Pennsylvania providers have relied heavily on agency staff or contractors to fill staffing needs, Shamberg said — but now, even those agencies are facing their own workforce shortage.

“Other sectors, including hospitals, have the financial means to offer extravagant bonuses and rapidly maximize wages,” Shamberg said. “Long-term care providers simply cannot keep pace, which leads to workers leaving for other jobs in health care and other industries.”

“Nursing homes are in constant competition for staff,” said Gifford. “Many providers struggle to recruit and retain caregivers who can often find less demanding jobs in other settings, such as hospitals and industries that can offer better pay.”

“This has been persistent, and the most pressing challenge confronting long-term care, which the COVID-19 pandemic has only exacerbated,” Gifford said. “The ultimate impact is on our nation’s seniors, who may face limited access to long-term care.”

Over 10,000 students in Florida school district isolated or quarantined a week into school year