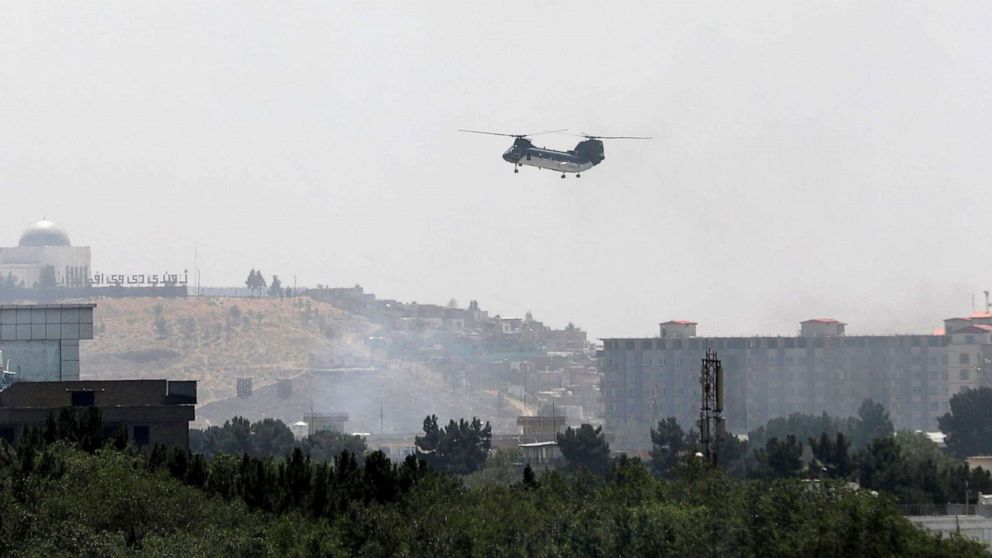 Another 1,000 soldiers from the Army’s 82nd Airborne have been ordered to head directly to Afghanistan’s capital instead of Kuwait to assist in the evacuation of U.S. personnel and Afghans who assisted the U.S. mission, a U.S. official told ABC News.

That brings the total number of U.S. troops being sent back to Afghanistan to 6,000.

The increase of service members to Kabul follows Gen. Frank McKenzie, the commander of U.S. Central Command, meeting with representatives of the Taliban earlier Sunday in Doha, Qatar, to inform them not to interfere with the U.S. mission at the airport, according to a U.S. official.

McKenzie also noted that the U.S. has the firepower to back up its defenses at the airport in Kabul, where the U.S. Embassy was also relocated.

On ABC’s “This Week,” Secretary of State Antony Blinken said Sunday that relocating the embassy to the airport was “to ensure they can operate safely and securely,” but still maintain a core diplomatic presence there.

The U.S. flag at the embassy was taken down Sunday, according to a U.S. official.

Ambassador Ross Wilson remains in Afghanistan, according to two U.S. officials. Like other diplomatic personnel, he was shepherded over to the airport earlier Sunday, a U.S. official said, and the plan was for him to remain with the “core” team to continue the embassy’s work from there. The evacuation of American diplomats continues with 500 from the embassy having left on flights so far.

US flights of Afghans to Fort Lee temporarily halted, evacuation flights will be ‘accelerated’

U.S. evacuation flights of Afghan interpreters and their families to Fort Lee in Virginia have been halted for the time being, according to two sources familiar with the situation.

These Afghans are those that had conditional approval for a U.S. visa from the embassy and passed security vetting. Approximately 2,000 have already been relocated and processed at the Army base in central Virginia.

The last flight to Fort Lee left Sunday afternoon, according to the sources, and it’s unclear when more may resume. The administration is instead focusing on evacuating U.S. personnel from the embassy first.

The State Dept. and Pentagon issued a joint statement Sunday night, saying they will “accelerate” evacuation flights for Afghans who served the U.S. mission in the coming days.

They announced that the evacuation flights will include U.S. citizens who have lived in Afghanistan, Afghans who worked for the U.S. embassy in Kabul and their families, “and other particularly vulnerable Afghan nationals,” although it’s unclear who qualifies for that.

The administration still does not have an agreement with a third country or U.S. territory to host Afghans, meaning it’s unclear when those flights will begin. The joint statement said, “We will find additional locations for those yet to be screened,” while those who have passed security vetting will continue to be relocated to Fort Lee.

The U.S. will be taking over air traffic control at Kabul airport, according to the joint statement, to facilitate these evacuation flights.

“If this is the best our nation can do to move allies to safety, we have abjectly failed to live up to our values and obligations,” said Krish O’Mara Vignarajah, president and CEO of Lutheran Immigration and Refugee Service, one of the largest U.S. resettlement agencies.

“The undeniable truth is that we had both the means and the time to save those in danger, and yet, we neglected to act in any meaningful way,” she added.

The Taliban on Sunday ordered its fighters to enter the capital city, according to a statement, because “now there are reports that districts in Kabul have been evacuated, police have left their job of providing security, ministries have been evacuated, and security personnel from the Kabul administration have fled.”

“So that God forbid the common thieves and robbers in Kabul do not mix, the abusers do not harm the people, the Islamic Emirate ordered its forces to enter the areas of Kabul from which the enemy went and areas there is a risk of theft and robbery,” the statement continued.

The Taliban went on to tell Kabul residents that they should not fear these troops and that none would enter anyone’s homes or harass anyone.

In another statement posted to Twitter later on Sunday, a spokesperson wrote that foreign nationals will not be in danger in Kabul.

“Let everyone stay in Kabul with full confidence, the forces of the Islamic Emirate are obliged to strengthen the security of Kabul and all other cities,” according to a translation.

The U.S. official declined to comment to ABC News on the Taliban’s response. American forces continue flowing in as quickly as possible said the official.

The U.S. Embassy issued a security alert urging Americans to shelter in place and avoid the airport, which was reportedly taking fire. Secretary General Jens Stoltenberg said on Twitter that NATO is helping keep the Kabul airport open to facilitate and coordinate evacuations.

A U.S. official said earlier Sunday that there was no expected direct impact on U.S. operations there.

Ghani flees Afghanistan, says it was to save Kabul from bloodshed

In a message posted to Facebook, Afghan President Ashraf Ghani said he left Kabul to save the capital city and its citizens from bloodshed.

“I came across a hard choice; I should stand to face the armed Taliban who wanted to enter the palace or leave the dear country that I dedicated my life to protecting … the past 20 years,” he said in the message, according to a translation.

“They are now facing a new historical test; either they will protect the name and honor of Afghanistan or they will prioritize other places and networks,” he said of the Taliban, according to the translation.

Taliban militants were ordered to enter Kabul later Sunday, following earlier assurances by Taliban officials that they did not intend to take Afghanistan’s capital by force.

Earlier Sunday, both former Afghan President Hamid Karzai and Dr. Abdullah Abdullah, head of the High Council for National Reconciliation, issued a statement confirming that Ghani had left the country and they announced plans to form a new reconciliation council.

The new reconciliation council will be formed headed by Afghan politician and former Mujahideen leader Gulbuddin Hekmatyar and former President Hamid Karzai, according to the statement, “To prevent chaos and reduce the suffering of the people and to better manage the affairs related to peace and (a) peaceful transfer.”

The Taliban reported earlier Sunday that its leaders were at the presidential palace to negotiate a transfer of power.

The U.S. State Department announced Thursday it was reducing its staff levels at the U.S. Embassy in Kabul and the Pentagon began sending in troops to help facilitate those departures. The president on Saturday authorized an additional 1,000 U.S. troops for deployment to Afghanistan, raising the number of troops to 5,000 to assist with “orderly and safe drawdown.”

ABC News Senior Foreign Correspondent Ian Pannell said Sunday that he could hear American Chinook helicopters flying overheard and ferrying people out to the airport so that they could leave the country.

“There’s a real climate of fear and dread of what the future holds,” Pannell told “This Week” co-anchor Jonathan Karl.

The U.S. Embassy in Kabul instructed all U.S. personnel to destroy items like documents and electronic devices to “reduce the amount of sensitive material on the property,” according to an internal notice obtained by ABC News.

“Please also include items with embassy or agency logos, Americans flags, or items which could be misused in propaganda efforts,” the notice said.

Blinken on “This Week” said the removal of American flags and sensitive items is standard operating procedure in any such situation.

The French Embassy in Kabul, like the United States, has moved its operations to the airport, but said in a statement that it remains operational and active.

“These orderly evacuation operations of our nationals have been underway for weeks,” the statement said.

The embassy also highlighted that in recent months Afghan employees of “French structures in Afghanistan who may be threatened were welcomed in our country with their families.”

Canada announced Sunday that it was temporarily suspending operations at its embassy in Kabul.

“The situation in Afghanistan is rapidly evolving and poses serious challenges to our ability to ensure the safety and security of our mission,” according to a statement.

“As always, our priority in these situations is ensuring the safety and security of Canadian personnel. They are now safely on their way back to Canada,” the statement continued.

The United Kingdom also announced it reduced its diplomatic presence in Afghanistan, but the ambassador remains in Kabul along with U.K. staffers who continue to work to provide assistance to British nationals and to its Afghan staff.

German Foreign Minister Heiko Mass said on Twitter that a core team from its embassy would remain on site to continue operations and help its citizens and former local staffers leave Afghanistan. The country’s crisis management team also decided to send in troops to assist in evacuations.

Meanwhile, Russia said it was ready to cooperate with a “transitional government” that would include the Taliban and members of the current government, the Russian Embassy in Kabul reportedly said, according to the state news agency TASS. The embassy also said the resignation of Ghani was a condition for the Taliban not storming Kabul.

Early Sunday, the Taliban entered the outskirts of Kabul and fighters were seen gathering in the Kabul districts of Kampany and Barchi, a local reporter confirmed to ABC News.

They have assured residents that their lives are not in danger and a Taliban spokesman told ABC News that the Taliban leaders have ordered their troops not to take over Kabul by force for now but to “remain at the gates.”

Ghani’s official Twitter account reported that gunshots were heard in remote areas of Kabul province, but that “the situation is under control.”

“This Week” co-anchor and chief global affairs correspondent Martha Raddatz said Sunday that the U.S. was “caught unaware and completely off guard” by the Taliban’s advance in Afghanistan. She told Karl that there was a “massive intelligence failure.”

President Joe Biden, spending the weekend at Camp David, has received another briefing from his national security team on the latest developments in Afghanistan and was to be briefed throughout the day, a White House official told ABC News.

Members of Congress also received virtual briefings on Afghanistan from Blinken, Defense Secretary Lloyd Austin and Chairman of the Joint Chiefs of Staff Gen. Mark Milley, according to congressional sources familiar with the matter.

This is a developing news story. Please check back for updates.