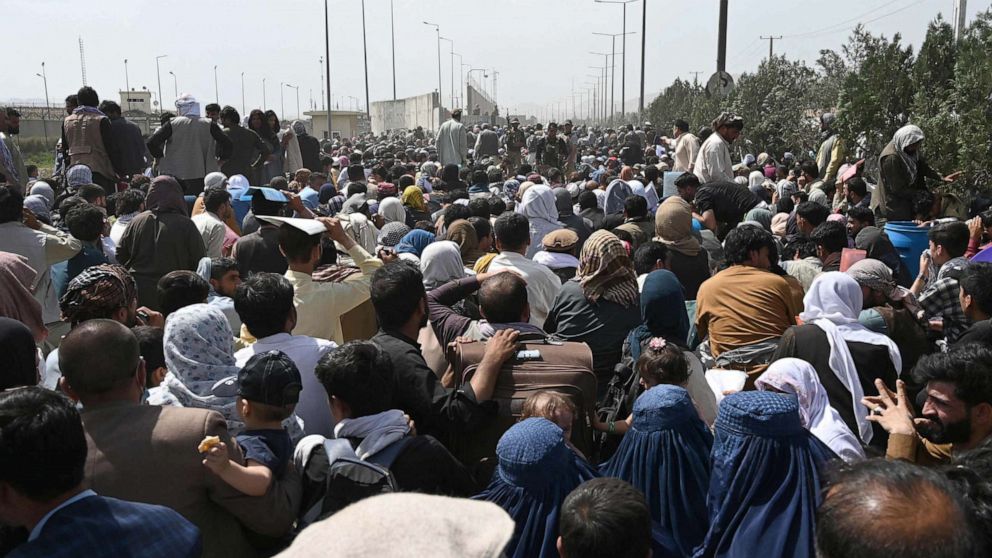 Current and former U.S. military special operations and intelligence community operatives are using their own networks of contacts to get elite Afghan soldiers, intelligence assets and interpreters to safety as they’ve become increasingly disillusioned and fed up with the U.S. government-led evacuation effort in Kabul, ABC News has learned.

One informal group, dubbed “Task Force Pineapple,” began as a frantic effort last weekend to get one former Afghan commando into Hamid Karzai International Airport as he was being hunted by Taliban who were texting him death threats. They knew he had worked with U.S. Special Forces and the elite SEAL Team Six for a dozen years, targeting Taliban leadership, and was therefore at high risk of reprisal.

Two months ago, he told ABC News, he had narrowly escaped a tiny outpost in northern Afghanistan that was later overrun, while awaiting his U.S. special immigrant visa to be approved.

During a harrowing night last week involving coordination between former Green Berets, aid workers and a congressional staffer for Florida Republican and Green Beret officer Rep. Mike Waltz, the ad hoc team enlisted the aid of a sleepless U.S. Embassy officer inside the airport. He helped Marines to identify the former Afghan commando, who was caught in the throngs of civilians outside the airport and said he saw two civilians knocked to the ground and killed.

“Two people died next to me — 1 foot away,” he told ABC News from outside the airport that night, as he tried for hours to reach an entry control point manned by U.S. Marines a short distance away.

With Taliban fighters mixing into the crowd of thousands and firing their AK-47s above the masses, the former elite commando was finally pulled into the U.S. security perimeter, where he shouted the password “pineapple” to American troops at the checkpoint. (The password has since changed.)

Two days later, the group of his American friends and comrades also helped get his family inside the airport to join him with the aid of the same U.S. embassy officer.

“I’m very excited. I feel like on one side of the wire is Afghanistan and on this side is America, and I told my family we are now on U.S. soil,” the former Afghan commando told ABC News after his young children went to sleep inside the well-guarded airport.

Other former members of the military and CIA have consolidated their own efforts with a separate group calling itself “Task Force Dunkirk,” a reference to the massive evacuation of British and other Allied forces from France in 1940 under threat of the Nazi juggernaut.

“We couldn’t stand by and just watch people we know fall to a very, very certain fate,” he added.

Parker said that while there are civilian supporters assisting the group, the majority of members served in Afghanistan. As the country fell to the Taliban, they received pleas for help from Afghans they worked with and befriended during the war. The veterans then began calling each other and talking about ways to help their comrades.

“I don’t know that I could live with myself if I didn’t do something,” Parker said. “I told my daughter the other day, ‘Someday this is going to be something that people talk about. And when they do, I want you to remember that your dad and a bunch of moms and dads did the best that they could.'”

Former deputy assistant secretary of defense and ABC News analyst Mick Mulroy is part of the grouping that is assisting former Afghan comrades.

“I am proud to be a member of this group,” said Mulroy, who served as a Marine and CIA paramilitary officer. “It is very impressive to see all of my retired former colleagues volunteer to meet the obligations we all made to those that committed to us during the last 20 years of fighting in Afghanistan. Many have taken weeks off work to assist, to include going to Afghanistan. We will see this through until everyone is out.”

Parker said Task Force Dunkirk and the groups it has now banded together with have helped get at least 83 at-risk Afghans out of the country — but their modus operandi remains “one at a time.”

The mission statement is simple: “To just get one more Afghan out. And after we get him or her out, we want to get just one more. That’s the best that we can do right now, and we don’t want to get at cross purposes with any broader effort,” Parker said.

After Task Force Pineapple’s initial success bringing the Afghan commando and then his family into the safety of the U.S. military’s security bubble, the group’s aspirations grew to getting dozens more out of harm’s way — especially those who fought against the Taliban in elite Afghan units alongside U.S. special operators, as well as women and children. It is now teaming up with Task Force Dunkirk in the effort.

“This is an informal, organic and eclectic group that spans the public and private sector with one goal: to get Afghans at risk to safety,” Scott Mann, a former Green Beret and leader of the nonprofit Heroes Journey, told ABC News.

The Afghan commando, who inspired Mann and others to form Task Force Pineapple to help get him through the Taliban and into Kabul’s airport, had served with the U.S. Special Forces lieutenant colonel a decade ago in the Village Stability Operations program.

But there are more commandos at grave risk, so the veterans said the group plans to continue.

“We are collating, learning and adapting — and moving faster than the hamstrung U.S. bureaucracy,” Mann said.

The U.S. military said it had flown at least 13,500 Afghans and 2,500 Americans out of Kabul since the Taliban took Kabul and the government fell. But the effort has slowed in recent days from 6,000 on Friday to 3,800 on Saturday for a variety of reasons, including the failure to quickly find third-party countries willing to accept Afghans temporarily while their U.S. visas are processed, the Taliban blocking those trying to reach the airport, and overcrowding at the airport with 16,000 people awaiting flights.

President Joe Biden has defended his handling of a catastrophe he said was inevitable, saying in an interview with ABC’s George Stephanopoulos there was no “way to have gotten out without chaos ensuing.” Critics have said the United States caused the defeat of the Afghan government and the abandonment of its loyal allies.

Many of the veterans of the 20-year war in Afghanistan said they were inspired by those Afghans who fought side-by-side with them and were often wounded and killed with them. Abandonment was never an option for them, they said, even when the U.S. abruptly withdrew almost all military forces last month.

“They never wavered. I and many of my friends are here today because of their bravery in battle. We owe them all effort to get them out and honor our word,” Mulroy said.

But desperate messages from Afghans continue to flood the inboxes of American friends.

Gretchen Peters, who formerly worked as a journalist for ABC News in Kabul, has made her own efforts to help. Although she has managed to get several Afghans on manifests for flights out of the country, she still has a feeling of helplessness when she reads her messages.

“I’m getting lots of requests from other people, mainly through Twitter … and it’s heartbreaking to hear the fear in people’s messages,” said Peters, now the executive director of the Center on Illicit Networks and Transnational Organized Crime.

“All we can do is try,” Peters said. “And I will feel better for having tried and failed than having never tried at all.”