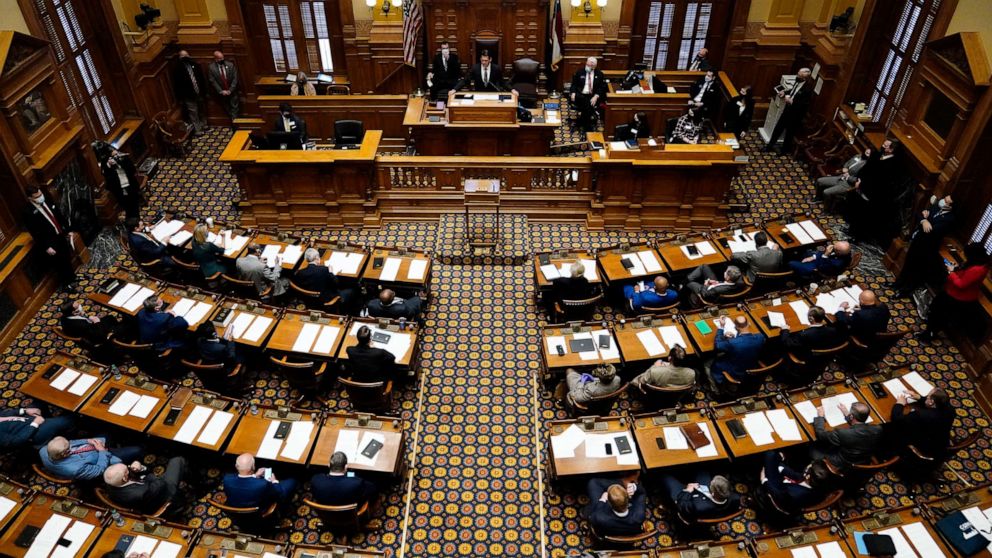 Among the dozens of election reform laws changing rules regarding how voters cast ballots, several have also diminished secretaries of states’ authority over elections or shifted aspects of election administration to highly partisan bodies, such as state legislators themselves or unevenly bipartisan election boards.

“Inserting partisan actors into election administration … is really a worrying trend when you understand it in the context of what happened in 2020,” said Jessica Marsden, counsel for Protect Democracy, a nonprofit founded by former executive branch officials in the White House Counsel’s Office and Department of Justice.

Analyzing the Voting Rights Lab’s state-level bill tracker and bill descriptions, ABC News identified at least eight states, including battlegrounds Arizona and Georgia, that have enacted 10 laws so far this year that change election laws by bolstering partisan entities’ power over the process or shifting election-related responsibilities from secretaries of state.

Each law was enacted by a Republican governor or by Republican-controlled legislatures voting to override Democratic governors’ vetoes.

These new laws include one that requires local election boards in Arkansas to refer election law violation complaints to the State Board of Election Commissioners — made up of five Republicans and just one Democrat — instead of their respective county clerks and local prosecutors; another that generally bars the executive and judicial branches in Kansas from modifying election law; and one in Texas requiring the governor, lieutenant governor and state house speaker to “unanimously agree” to the secretary of state granting local election commissions’ or boards’ requests to accept donations over $1,000.

Some of these changes appear to be in direct retaliation to actions officials took last year around the election.

Arizona Democratic secretary of state, Katie Hobbs, can no longer represent the state in lawsuits defending its election code. That power now lies exclusively with the Republican attorney general — but only through Jan. 2, 2023, when Hobbs’ term ends.

In Kentucky, where the Republican secretary of state and Democratic Gov. Andy Beshear were heralded for their bipartisan collaboration to give electors absentee and early voting options they’d never had before, state law now explicitly opposes such coordination during a state of emergency. Beshear vetoed this bill, which curtails his office’s emergency powers, but the Republican-majority legislature voted to override him.

And in Montana, then-Gov. Steve Bullock, a Democrat, used his emergency powers to authorize counties to conduct all-mail elections for the June primary and November election. Every county opted to do this in June, and about 80% of the state’s counties, including the eight most populous, did in November. But in April, Republican Gov. Greg Gianforte signed into law a bill barring the governor from changing election procedures unless the legislature signs off on it.

“This is unprecedented in ways that I couldn’t have even dreamed up myself,” Audrey Kline, the national policy director for the National Vote At Home Institute, told ABC News. “It does feel like there’s a backlash, and there’s really a misunderstanding about how elections really work.”

Gov. Brian Kemp and other Republicans have defended the law as “making it easy to vote and hard to cheat,” but Democrats, including Kemp’s 2018 opponent, Stacey Abrams, described it as “Jim Crow 2.0.”

Both Marsden and Kline pointed to its provisions shifting control over elections as among the most concerning enacted so far.

The law removed Republican Secretary of State Brad Raffensperger, who withstood direct pressure from then-President Donald Trump to “find” enough votes to overturn the election, as chairman and a voting member of the State Election Board, which investigates potential fraud and irregularities.

But the provision the two experts highlighted is one allowing state legislators to request a “performance review” of local election boards. If the State Election Board, which currently has three Republicans and one Democrat, determines a review yields enough evidence of wrongdoing or negligence under the law, the state will appoint a superintendent who takes on the local, multi-person board’s responsibilities, including hiring and firing power, and certifying elections.

Enough Republican lawmakers have already called for a performance review in Democratic-leaning Fulton County, the most populous in Georgia and the target of several 2020 election conspiracies. It’s a long way from any potential “takeover,” which is how Democrats describe the process, but up to four counties could have a superintendent at once.

How a “takeover” could impact a future election’s outcome is unclear, but the concept itself injects “confusion and uncertainty” into the election process, Marsden argued.

Some of the most extreme pieces of legislation introduced never passed, Marsden noted. In Arizona, a bill that would have given the state legislature power to undo the certification of presidential electors by a simple majority vote up until the inauguration died in committee.

The bill failing isn’t a “safeguard,” she warned, because this is exactly what some Republicans wanted to happen last year to appoint electors supporting Trump in key battleground states he lost, but baselessly claimed he would’ve won if not for nonexistent mass voter fraud.

Trump, who may seek a comeback in 2024, still says it should have happened. He again attacked Kemp in a statement Wednesday for not calling one to appoint new electors, which Kemp said at the time would have been illegal.

But the former president’s vendetta against officials who did not bend to his demands around the election is not as damaging to the election process as the widespread lack of trust Republicans now have in U.S. elections. Among Republicans, 65% still believe President Joe Biden was not legitimately elected, according to a July AP/NORC poll.

Achieving full nonpartisan elections, conceded Kline, is not really possible. But what must exist are “bipartisan counterbalances” — like having a Republican-Democratic duo determine voter intent together when a ballot marking is unclear — and operating under the same set of basic facts.

A checkmark, for example, clearly indicates a voter’s intent, she said, even though voters are supposed to fill in the entire oval on a ballot.

What happens when Americans no longer believe in the same set of facts around elections?

“I think we’re all wrestling with these questions,” Kline said. “Leaving it up to a bipartisan team is probably as close as we can get to a perfect sort of check-and-balance system. But when we can’t agree on basic facts, it becomes more difficult.”

CORRECTION: A previous version of this story counted a provision, which would have given state legislative leaders the power to intervene in cases challenging state statutes and cases challenging redistricting maps, in an Ohio appropriations bill. The provision was vetoed by the governor when the rest of bill was signed into law. The story and overall count has been updated to reflect this.