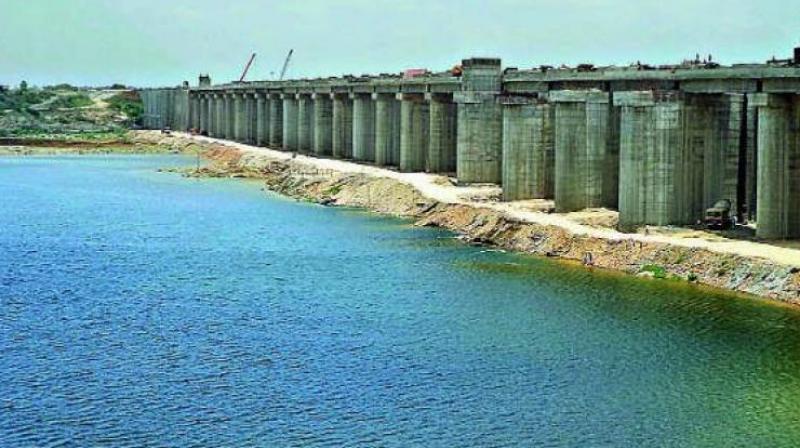 ANANTAPUR: In view of the ongoing water disputes with Telangana State over sharing of Krishna waters, Karnataka government is taking rapid steps to mount pressure on Andhra Pradesh to agree for supplementary reservoir across Tungabhadra in the upstream parts of TB dam even as AP continues to oppose the proposal. Remaining oblivious, Karnataka is fast-tracking its Detailed Project Report (DPR) that will be sent to the Centre and which will cite reasons for the heavy siltation in the TB dam at Hospet.

Karnataka has been insisting on a supplementary reservoir across Tungabhadra near Navili in the upstream area in Raichur district. Though it was named as Flood Flow Augmentation reservoir with a 30 TMC ft capacity, the reservoir can impact sources of TB dam, the inter-state project of AP, Karnataka and a part of TS.

Augmentation reservoir has been proposed because of heavy deposits of silt in TB dam and the reduced water storage capacity to 100.85 TMC ft as against actual capacity of 132.47 TMC ft. The Karnataka government had released `14.29 crore for preparing the DPR last year.

State irrigation authorities were reportedly failing to protect the rights and pending proposals like parallel flood canal towards AP from TB reservoir for utilising available water. No objections were filed during Board meetings over false reports on actual water capacity in the reservoir.  Karnataka was never keen on a parallel canal, K. Sharma, an irrigation expert, observed.

Deccan Chronicle brought the issue to the limelight following confusing reports about the capacity of the TB reservoir. However, Karnataka was reportedly trying to take advantage of the dispute between AP and TS. TB Board sources revealed that a majority opinion would be final during the Board meeting of four members each from Karnataka, AP, TS and a CWC official from Delhi. AP would suffer if Karnataka can convince the CWC official to have a majority.

A senior engineer from AP said that proposals for the parallel flood canal to receive at least one TMC ft per day during the rainy season were confined to papers.

But, the state government had neither appointed a team of engineers nor released required funds to prepare the DPR, he said.

In addition, a retired engineer Dwarakanath prepared a plan to take up de-silting in the existing TB reservoir that would help improve the dam to actual storage capacity. This was more advisable to a supplementary reservoir, which was a costly proposition.