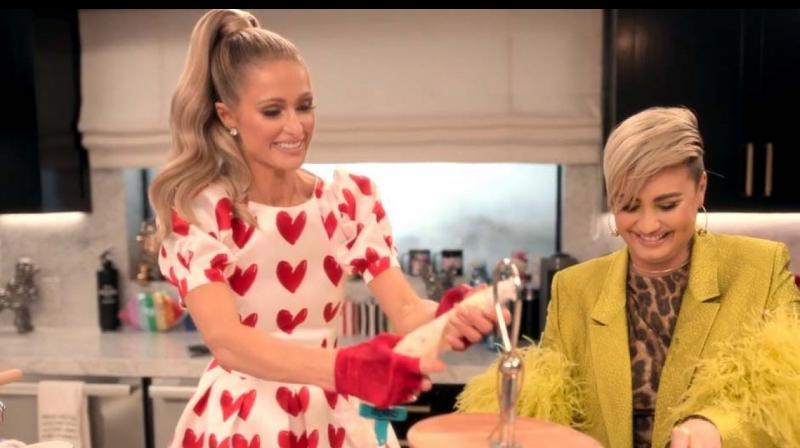 The best thing that happened to reality TV shows during the pandemic is an influx of A-list celebrities in bulk, who were otherwise too “choosy” with real-life drama for entertainment.
In a recent Netflix show Cooking With Paris, hotel heiress and socialite Paris Hilton is whipping up delicacies in her sparkling kitchen with her celebrity friends. For those yet to catch up the series showcases Paris as a host and cook, working her way in the kitchen and grocery market as she flaunts her stunning couture ensembles and customised glittering paraphernalia.

From dropping feathers from her dress in the dough to feeding her dog caviar in the kitchen — Paris Hiton’s cooking ideas can be a nightmare for anyone who loves to cook. The delish combination of Paris’s glam factor and attempt to create good-looking food makes for engaging entertainment undoubtedly. However, does the real-life audience agree with her “sliving” antics on TV, which is slay+living? We explore.

A few months ago, a similar concept show Star Vs Food aired on Discovery Plus channel showcased Indian film celebrities such as Kareena Kapoor Khan, Karan Johar and Malaika Arora, dealing with kitchen disasters with trained chefs.
While cooking is still considered a basic life skill, to watch privileged celebrities make a fool of themselves guarantees eyeballs.
MasterChef India winner and celebrity chef Shipra Khanna says, “It is a show made to entertain the viewer with no harm aimed at anyone, whatsoever. Everyone relates with some celebrity or has a favourite in showbiz, and if their favourite celebs are cooking and making mistakes it’s just more relatable and fun to watch. Of course, one enjoys the show as it kills the monotony and is pure entertainment.”

Celebrities are professionals who are extremely comfortable in front of the camera. They know how to engage the viewers. According to Balvinder Pal Singh Lubana, executive chef at Courtyard by Marriott Gurugram Downtown, even if celebs explain a simple soup recipe, they will add humour and make it interesting for everyone to watch.
“Watching a celebrity cook and making a mess is entertaining because one would never imagine them to be cooking in their everyday life. We picture them as people who have everything put together for them,” says Balvinder. “People watch these shows not because they want to sharpen their culinary skills or learn how to cook. They watch them because they want to be entertained and it makes for great light-hearted television.”

Working in the kitchen can be quite difficult for amateurs and people who are not experienced. But chef Balvinder cautions that can be dangerous if one is in high heels and dresses not suitable for the kitchen. “Numerous mishaps can take place if one is not in the right attire. Even for television, I wouldn’t suggest high heels or couture dresses. We do get trendy pieces that are quite in line with today’s fashion yet still comfortable and suitable for the kitchen. Show makers should consider it to avoid any adversity,” adds the chef.

Show must go on

Televised life is called reel life for a reason — because everything shown on camera is aimed at amusement, which we can’t do or see in real life scenarios.
Actor Akash Chaudhary points out that it could be the main reason we enjoy watching such programmes so much. “It’s not just about good publicity but we have to accept that people like to watch bizarre things on TV — be it superficial movies or anything unusual — but that doesn’t mean they want that in real life. Any foodie will have a major OCD if they see a messy kitchen in real life, but celebs doing it looks fun because it is fiction; no one is going to eat it. Everything is shot and done in a way that satisfies the viewers’ curiosity,” he explains.
The actor also points out that all of us tend to see our idols do stupid things to make ourselves feel. “Even if they call it a reality show, it is fiction at the end of the day and people shouldn’t blindly copy it,” adds Akash, and sums up saying, “Everything is shot in a pre-arranged set in a safe environment, and it is dangerous to do that in real life. I post my IG photos of cooking shirtless always, but would I do that in real life? Never! It’s hazardous. What we do in front of a camera is just to satisfy the eyes — more like living in a whimsical world.”

Fitness, a part of their life

Suit up in style: 3 major tailoring trends to try