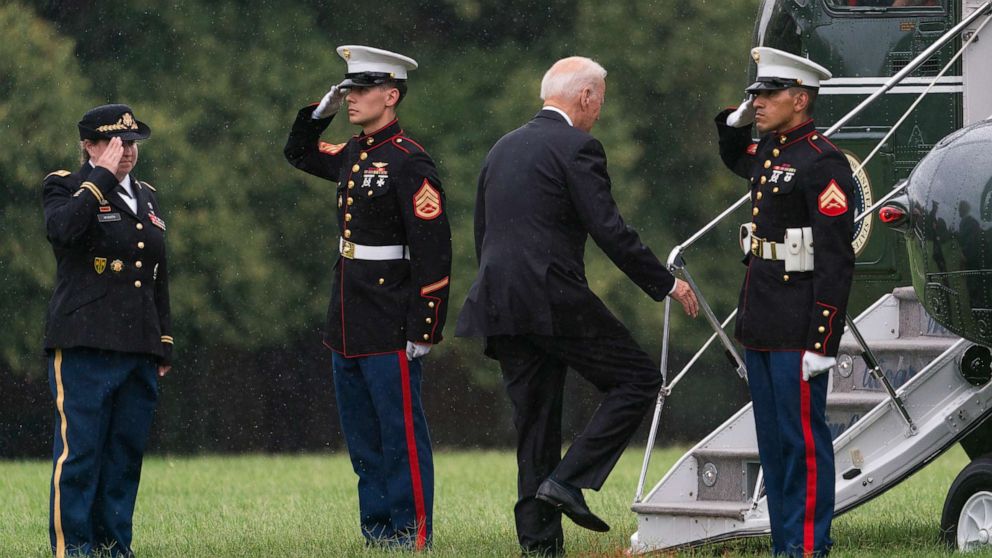 At 4:19 p.m. Eastern Daylight Time on Monday, President Joe Biden concluded a speech defending his decision to withdraw U.S. forces from Afghanistan, tapping his binder on a podium in the East Room of the White House for emphasis.

“I know my decision will be criticized, but I would rather take all that criticism than pass this decision on to another president of the United States — yet another one — a fifth one. Because it’s the right one. It’s the right decision for our people,” Biden declared, leaving no doubt about his stance.

But as Biden withdrew to Camp David, his administration officials were left in Washington to field the lingering questions the president did not address: What exactly will be the fate of endangered Afghans struggling to leave the country? And why was the administration so surprised by the speed of the Taliban’s takeover?

For the Afghan interpreters and contractors who have aided U.S. forces during the 20-year war and are now under threat of retaliation from Taliban militants, getting answers is urgent.

More than 1,600 people have been evacuated from Afghanistan so far, State Department Spokesperson Ned Price confirmed Monday, but he declined to specify how many of those people are Special Visa applicants.

“As long as we deem that our public servants serving at [Hamid Karzai International Airport] are safe and secure, we will be engaged in an ambitious, aggressive, and around-the-clock effort to relocate as many as we possibly can,” Price said.

Defense Department Spokesperson John Kirby said Tuesday morning that the Department of Defense is working to ramp up flight departures to one per hour. He hoped to achieve that cadence within the next 24 hours. But for those Afghans who are unable to travel safely through Taliban checkpoints to the airport, solutions are sparse.

“I know that there are concerns about why we did not begin evacuating Afghans — civilians sooner. Part of the answer is some of the Afghans did not want to leave earlier — still hopeful for their country. And part of it was because the Afghan government and its supporters discouraged us from organizing a mass exodus to avoid triggering, as they said, ‘a crisis of confidence,'” Biden said in his remarks Monday, attempting to defend the administration’s slow evacuation pace.

“We plan on being on the ground there in Afghanistan for the next couple of weeks. It’s not just about moving out Americans, it is very much about meeting our moral and sacred obligations to those Afghans who helped us over the last 20 years getting as many out as we can,” Kirby said on ABC’s “Good Morning America” on Tuesday.

For endangered Afghans, the challenge of leaving the country has been exacerbated by the sudden Taliban blitz.

“The truth is, this did unfold more quickly than we had anticipated,” Biden said Monday, admitting that his intelligence briefings did not accurately predict the pace of events. Biden did not directly address whether he considers it an intelligence failure.

While some senior military officials cautioned Biden against withdrawal, presenting him with a litany of possible consequences, Biden chose to move forward. DOD Spokesperson John Kirby defended the president’s choice on “Good Morning America” on Monday.

“The commander in chief is the commander in chief. It’s not about overruling his military leaders or other advisers. He is given options. He is given the pros and cons for each option, and then it’s up to him to decide. He was advised by the Defense Department, we had a voice. We had a seat at the table. We provided our advice and counsel. The president made his decision and now we’re in execution mode,” Kirby said.

Even members of Biden’s own party are raising questions about the intelligence on Afghanistan. Sen. Mark Warner, D-Va.,chairman of the Senate Intelligence Committee, proposed investigating what led to the government’s underestimation of the Taliban advance.

“I hope to work with the other committees of jurisdiction to ask tough but necessary questions about why we weren’t better prepared for a worst-case scenario involving such a swift and total collapse of the Afghan government and security forces,” Warner said in a statement Monday.

For those looking to carry out those investigations, the answers might be disheartening. The government’s nonpartisan watchdog on operations in Afghanistan, the U.S. Special Inspector General for Afghanistan Reconstruction, on Monday released a report compiled just before the Taliban takeover, analyzing 20 years of U.S. efforts there. The report delivers a blunt verdict.

“Twenty years later, much has improved, and much has not in Afghanistan. If the goal was to rebuild and leave behind a country that can sustain itself and pose little threat to U.S. national security interests, the overall picture in Afghanistan is bleak,” it concludes.

Biden attempts to both claim and pass the buck on Afghanistan: The Note

US mission in Afghanistan a failure: Government watchdog