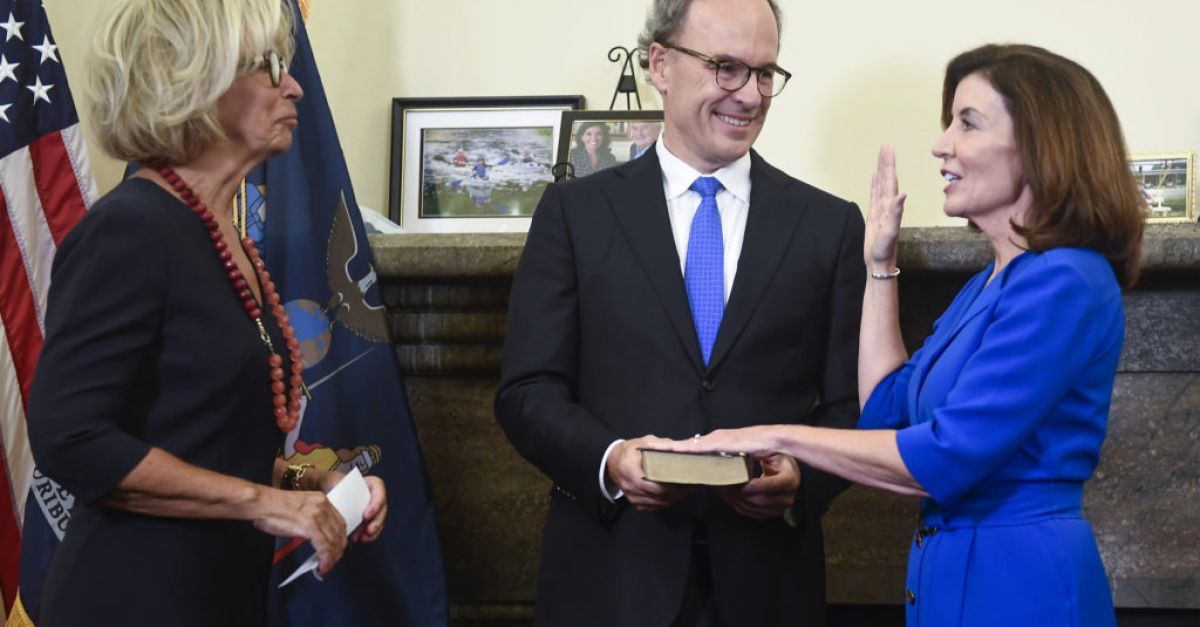 Kathy Hochul became the first female governor of New York at the stroke of midnight, taking control of a state government desperate to get back to business after months of distractions over sexual harassment allegations against Andrew Cuomo.

The Democrat from western New York was sworn in as governor in a brief, private ceremony in the New York State Capitol overseen by the state’s chief judge, Janet DiFiore.

Afterward, she told WGRZ, a Buffalo television station, she felt “the weight of responsibility” on her shoulders.

“I’ll tell New Yorkers I’m up to the task.

“And I’m really proud to be able to serve as their governor and I won’t let them down,” she said.

Honored to be officially sworn in as New York's 57th Governor.

Looking forward to the full swearing-in ceremony with my family later this morning, and addressing the people of New York later today. pic.twitter.com/RUsDtzoW7r

Ms Hochul’s ascent to the top job was a history-making moment in a capital where women have only recently begun chipping away at a notoriously male-dominated political culture.

Mr Cuomo left office at 12.00am, two weeks after he announced he would resign rather than face a likely impeachment battle.

He submitted his resignation letter late on Monday to the leaders of the state Assembly and Senate.

On his final day in office, MR Cuomo released a pre-recorded farewell address in which he defended his record over a decade as New York’s governor and portrayed himself as the victim of a “media frenzy”.

Ms Hochul was scheduled to have a ceremonial swearing-in event at the Capitol, with more pomp than the brief, legally required event during the night.

She planned to meet with legislative leaders later in the morning and make a public address at 3pm on Tuesday.

For the first time, a majority of the most powerful figures in New York state government will be women, including state Senate Majority Leader Andrea Stewart-Cousins, Attorney General Letitia James and the chief judge, Ms DiFiore.

The state Assembly is led by a man, Speaker Carl Heastie.

Ms Hochul will inherit immense challenges as she takes over an administration facing criticism for inaction in Mr Cuomo’s final months.

Hospital admissions are climbing even as schools prepare to go back into session.

Big decisions lay ahead on whether to mandate masks or vaccines for certain groups, or whether to reinstate social distancing restrictions if the state’s latest wave of infections worsens.

Ms Hochul has said she favours making masks mandatory for schoolchildren, a contrast with Mr Cuomo, who said he lacked that authority.

Mr Cuomo’s resignation comes after an independent investigation overseen by Ms James concluded there was credible evidence he had sexually harassed at least 11 women.

Thank you for the honor of serving you.

Thank you for empowering me to fight for you.

In his farewell remarks, Mr Cuomo struck a defiant tone, saying the attorney general’s report that triggered his resignation was designed to be ”a political firecracker on an explosive topic, and it did work”.

“There was a political and media stampede,” he said.

Mr Cuomo also touted himself as a bulwark against his party’s left wing, which he said wants to defund the police and demonise businesses, and boasted of making government effective in his years in office.

He cited his work battling the Covid-19 pandemic, legalising same-sex marriage and hiking the minimum wage to 15 US dollars.

“I tried my best to deliver for you,” Mr Cuomo said.