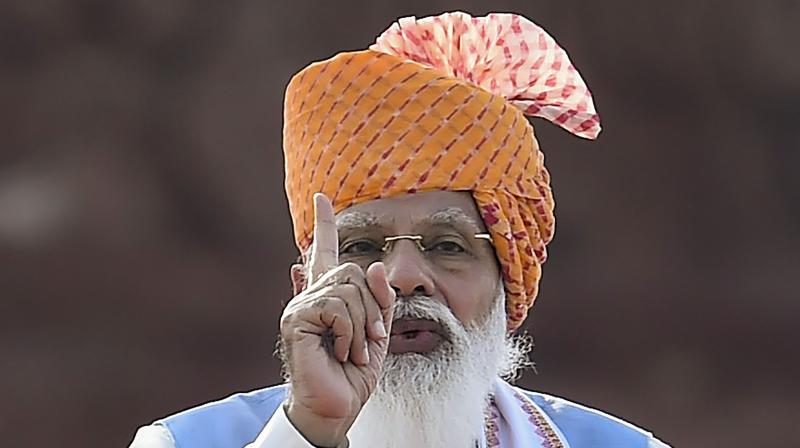 New Delhi: In his eighth consecutive Independence Day address to the nation from the ramparts of the historic Red Fort, Prime Minister Narendra Modi on Sunday proposed an ambitious development plan for the country for the next 25 years till India’s centenary of Independence in 2047, terming it as “Amrit Kaal” (a period for emancipation), and announced a slew of development programmes, including a landmark Rs 100 lakh crore “Gati Shakti" initiative to boost infrastructure and employment opportunities

PM Modi began his speech by praising India’s athletes who took part in the Tokyo Olympics and were in attendance at Red Fort, freedom fighters and all those who helped the country in its fight against coronavirus after he hoisted and unfurled the national flag. “This is a day to remember our great freedom fighters… The athletes who have made us proud at the Tokyo Olympics are here amongst us today. I urge the nation to applaud their achievement today. They have not only won our hearts but also inspired future generations,” PM Modi said.

During his nearly 90-minute speech, Mr Modi outlined the roadmap for a new and assertive India and added weight to his oft-quoted slogan “Sabka Saath, Sabka Vikas”, by adding a new call — “Sabka Prayas” (everyone's effort), saying this would be very important for the achievement of all the country's goals.

Calling for making the next 25 years glorious for India with "new thresholds, aspirations and dreams”, he said, “We should not limit the occasion of 75 years of Indian Independence to just one ceremony. We must lay the groundwork for new resolutions and move forward with new resolutions… Amrit Kaal is 25 years. But we don't have to wait for long to achieve our goals. We have to start now… Our country also has to change and we as citizens have to change ourselves too… We have started with the spirit of ‘Sabka Saath, Sabka Vikas, Sabka Vishwas’. Today I am requesting from the ramparts of the Red Fort that ‘Sabka Saath, Sabka Vikas, Sabka Vishwas’ and now Sakka Prayas are very important for the achievement of our goals.”

The aim of amrut kaal (golden hour), he said, is to build an India where "cities and villages do not have a development divide… an India where the government does not unnecessarily interfere in the lives of its people".

Launching the National Hydrogen Mission for production of green hydrogen or clean energy, he asserted that the country would launch the National Master Plan of Prime Minister ‘Gati Shakti’ which will be “a huge scheme and fulfil the dreams of crores of countrymen”, adding that “this scheme of more than Rs 100 lakh crores will result in new employment opportunities for lakhs of youth”.

In the obvious backdrop of the controversy over the farm laws, PM Modi once again backed agricultural reforms saying they had been initiated to benefit the small farmers who constituted 80 per cent of the total farming community. “Chota kisan bane desh ki shaan (the small farmer will be the pride of the nation)”, PM Modi asserted and said rice available through government schemes would be “fortified” (with nutrients) by 2024.

On J&K, PM Modi said, “The delimitation commission has been constituted in Jammu and Kashmir itself and preparations are also going on for the Assembly elections. On development in Ladakh, he said, “Ladakh is witnessing a new transformative phase where the government is focusing on building world-class infrastructure.”

Mr Modi also said India is fighting the challenges of terrorism and expansionism with great courage and astuteness. He asserted that India does not hesitate in taking tough decisions and has the political will to do so.

"India has given a stern signal to its enemies by conducting surgical and air strikes. This tells us that India is changing and can take the most difficult decisions and isn't reluctant to implement them," he added and assured that his government would leave no stone unturned in strengthening the armed forces tasked with the security of the country.

PM Modi also said the country had taken an “emotional decision” to commemorate August 14 as “Partition Horrors Remembrance Day” in “memory of the victims of Partition” and that “those who were subjected to inhuman circumstances, suffered torturous treatment, (and) could not even receive a dignified cremation must all remain alive and never get erased from our memories”.

Cops rule out attack on BJP corporator by TRS men