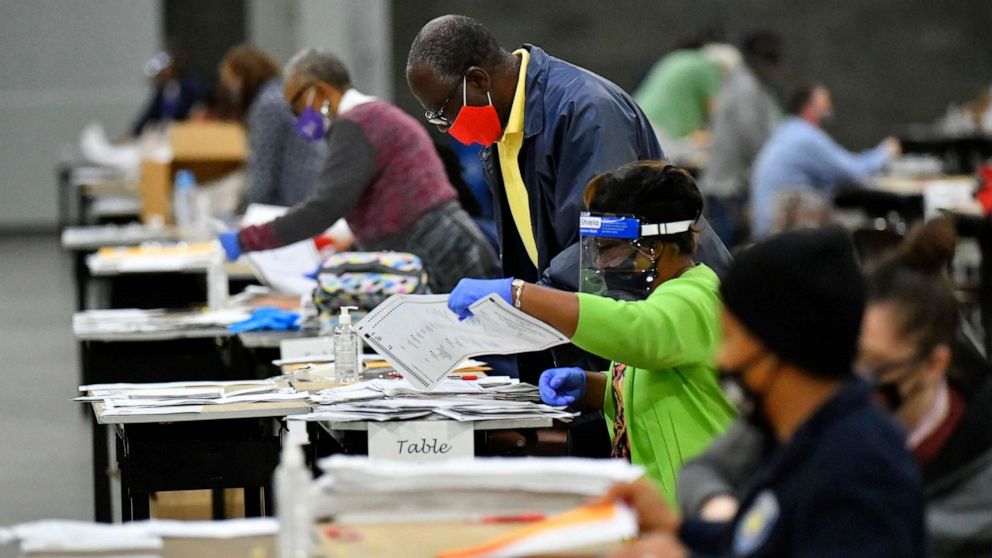 Georgia’s State Election Board appointed a bipartisan independent performance review panel on Wednesday to investigate potential violations of election law by officials in Fulton, the state’s largest county — a move that could lead to the takeover of the county Registration and Elections Board.

Under SB 202, the election code overhaul that Republican Gov. Brian Kemp enacted in March amid protests and outrage from Democrats and voting rights activists, members of the state legislature can now request a performance review of their respective county’s local election board. The county reviews could lead to what critics have called a state “takeover” of local election branches.

Once the Fulton County review is complete, if at least three members of the State Election Board determine that the review finds at least three violations in the last two general election cycles that have not been “sufficiently remedied,” and that there is “clear and convincing evidence” that within the last two years, the county has shown “nonfeasance, malfeasance, or gross negligence” in election administration, a temporary election superintendent will be appointed by the Board to replace the multi-person local board of elections for at least nine months.

If the Board votes to appoint a superintendent after reviewing the panel’s written report, that superintendent will assume all the local board’s responsibilities, which include hiring and firing power as well as certifying elections.

The Board was legally required to appoint the review panel because enough state representatives and senators — all Republicans — from Fulton County asked for it. But while county Board of Commissioners Chairman Robb Pitts acknowledged that, he also blasted the development.

“It is still outrageous to see the Big Lie and demands of conspiracy theorists continue to progress. This is the result of a cynical ploy to undermine faith in our elections process and democracy itself – it is shameful partisan politics at its very worst,” Pitts said in a statement to ABC News.

Stacey Abrams, founder of Fair Fight Action, also decried the move as “partisan,” submitting testimony to the Board saying appointing the review panel “endangers our democracy.”

But Kemp, who’s staunchly defended the new law, backed it, tweeting, “Fulton County has a long history of mismanagement, incompetence, and a lack of transparency when it comes to running elections – including during 2020. I fully support this review.”

The three-member review panel is made up of Stephen Day, a Democratic member of metro Atlanta’s Gwinnett County elections board; Ricky Kittle, the Republican chairman of rural Northwest, Georgia’s Catoosa County elections board; and Ryan Germany, general counsel in Raffensperger’s office. Along with the secretary, Germany was heard rebuffing former President Donald Trump’s false allegations of rampant voter fraud in a recording of the now-infamous Jan. 2 phone call in which Trump demanded Raffensperger “find” exactly enough votes to overturn the election in Georgia.

Fulton County, a Democratic stronghold and home to most of Atlanta and a little over 10% of Georgia’s registered voters, was at the center of election conspiracy theories that allies and supporters of Trump, as well as the former president himself, spread about the 2020 presidential election. Those included one the secretary of state’s office debunked numerous times alleging there were “suitcases” of mysterious ballots that showed up during the counting process in the county.

Just last month, Trump in a statement again targeted the November election in Fulton County as a “total fraud,” citing baseless allegations from a group fighting in court to review the county’s absentee ballots in order to claim the county “stuffed the ballot box.”

But while there is no evidence of election fraud or tampering in the county in any of the 2020 elections, managerial and administration issues that often trickle down to voters, like hours-long lines, have been documented for years leading up to November.

Former Voter Protection Director for the Democratic Party of Georgia Sara Tindall Ghazal, the lone Democrat serving alongside three Republicans on the State Election Board, spoke to that during Wednesday’s meeting.

She said the three-member review panel will face “tremendous political pressure on both sides to come to preordained conclusions” in this investigation.

“The narrative driving this pressure has been influenced by disinformation surrounding the November 2020 election, but the fact remains that Fulton County voters have reported numerous problems for far longer than November 2020, particularly surrounding registration and absentee ballots,” she said.

While she urged the panel to “resist” partisan pressure and said she believed the members would, she also urged Fulton officials to take the review as “an opportunity to have fresh eyes on their systems and their procedures and identify areas of improvement.”

Since SB 202’s passage, it was expected that Fulton County would be the first test of the new law. In June, GOP lawmakers representing Fulton formally requested the review in letters obtained by ABC News, with state senators calling it “a measure of last resort.”

“The public record clearly demonstrates ample evidence which calls into question the competence of [Fulton’s] local election official regarding the oversight and administration of elections.. with state law and regulations,” that letter concluded.

America’s war over Afghanistan is just getting started

With unruly passenger incidents on the rise, flight attendants turn to self-defense training