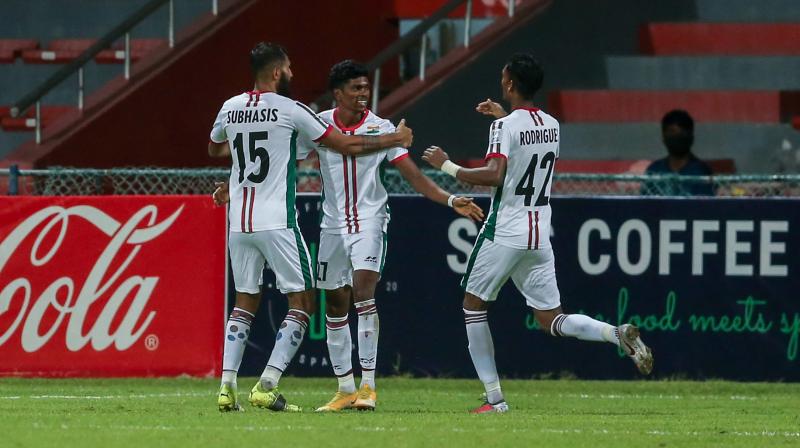 Male (Maldives): ATK Mohun Bagan pumped in three second half goals in a brilliant comeback to beat Maziya Sports & Recreation of the Maldives 3-1 in their Group D match and move within a point of reaching the AFC Cup knockout stage here.

The Kolkata-based Indian Super League team was trailing 0-1 at half time after Ibrahim Aisham had scored for the home side in the 25th minute.

But ATK Mohun Bagan struck in the 48th, 63rd and 77th minutes through Liston Colaco, Roy Krishna and Manvir Singh to emerge victorious on Saturday.

With two wins from two matches, Antonio Habas' side just need a draw in their last group match on Tuesday against Bashundhara Kings — on four points — of Bangladesh for a place in the Inter-Zone Semi-final.

Maziya join India's another club Bengaluru FC in being eliminated from the competition. Bengaluru FC had played out a 0-0 draw against Bashundhara on Saturday after losing to ATK Mohun Bagan 0-2 in their campaign opener.

The home side opened their account for the campaign after 25 minutes when Cornelius Stewart led a quick counter-attack, embarking on a solo run down the right before crossing for Ibrahim Aisham who swept home Maziya's opener.

Five minutes later, the Maldives side were close to adding a second in a similar fashion with Stewart again providing the supply down the right, but this time he fed Hussain Nihan inside the box and the latter squared across the mouth of goal for Hamzath Mohamed who fluffed his lines.

Liston Colaco tested the goalkeeper with a well-struck free-kick from 25 yards out as ATK Mohun Bagan chased an equaliser, but Mirzokhid Mamatkhonov was up for the challenge and parried away the effort to keep Maziya in the lead at the break.

The Indian side got their second half off to a flying start as halftime substitute Ashutosh Mehta produced an instant impact, whipping a pinpoint cross from the right for Colaco who met it with a diving header into the back of the net to bring ATK Mohun Bagan level.

Four minutes after the hour-mark, substitute Hugo Boumous executed a fine through-pass, sending Colaco through on goal, but the latter's attempt was saved by the hosts' Uzbek goalkeeper, but only as far as the onrushing Roy Krishna who kept his composure to expertly strike on the rebound to give ATK Mohun Bagan the lead for the first time in the match.

France-born Boumous displayed his creative abilities once more with 14 minutes to go, feeding Manvir Singh with an exquisite pass, and the forward made no mistakes with only the goalkeeper to beat, drilling it into the bottom corner to make it 3-1.

Habas later said a change in formation saw his side up the tempo in the second half as three players found the back of the net.

"We had some difficulties with the opponent, because they scored first. After a change of system, we became consistent and I'm very proud of my players," Habas said after the match.

"We have six points, and no other team has that. (In this match) we had the possibility to draw, but we didn't have to think that way, only the possibility for us to try to win, and this will be our idea for the next match."

Roy Krishna's overall performance, besides the second goal for ATK Mohun Bagan, saw him being named the Player of the Match and the Fiji international said the team never doubted themselves despite Maziya taking the lead.

"We knew that we had the quality, with the best players in our team and we trusted in the way we played," said Krishna.

"We knew we would get more chances and we just had to be patient. We hurried a lot (in the first half) but we played the way we wanted in the second half and got the goals."