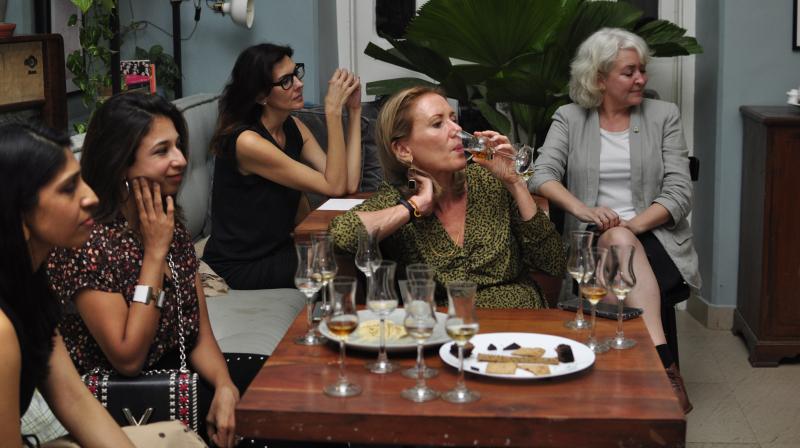 Whisky is an ever-evolving world and there’s always something new to learn. One way to stay atop it is through a membership to a whisky club. This way you will always have some fine spirits to drink (many of which have won awards), and another whisky nerd to debate the complexity of each blend or single malt. These gatherings are also a great way to meet new people and expand your network of drinking buddies on a global scale.

Contrary to popular belief whisky clubs are not made of men in tweed jackets smoking cigars in darkly lit lounges trimmed in leather. Located across the country, some nationally spread and others only serving locals, whisky clubs provide an accessible, safe space to learn about whisky and do it in a fun and educational way. “During our trips abroad we came across numerous whisky groups that were friendly and welcoming. But the ones in Mumbai were rather restrictive. The tastings we attended were unfortunately less about appreciating whisky and more about flaunting age statements. So our idea behind launching ‘The Dram Club’ was to create an open and laid-back approach to understanding and appreciating all things whisky,” explains Swati Sharma, co-founder of The Dram Club.

Based in Mumbai the club organises tasting sessions where they delve deeper into the nuances of a particular whisky. Sharma leverages her nose as well as her deep ties in whisky industry to ferret undiscovered drams and ultra hard-to-find expressions. The club also hosted the India leg of Speyside Whisky Festival, a 20-year-old festival that’s held everywhere in Scotland and also in over 30 cities in Europe and USA.

Whisky beyond tastings
Apart from dissecting and discussing the amber liquid, whisky clubs even collaborate with prominent Indian distilleries to release private bottles for its associates. Members of the Single Malt Amateur Club (SMAC) in Bangalore had Amrut Amaze Trilogy — a limited-edition single malt whisky crafted exclusively for them. Paul John Single Cask Whisky also had exclusive bottlings for SMAC members based on the palate preferences of the group. Distillery tours where the members get an up-close view on the brown spirit are other popular perks for club members. “Apart from working with distilleries to help members get their hands on the latest releases we also organize fun whisky trails. The last one was to the Paul John distillery in Goa on the leap day of 2020,” says Hemanth Rao who founded SMAC.

Much like snowflakes, no two whisky clubs are exactly alike. Each has a distinct focus, structure and raison d'être. What they all have in common is that they’re bound together by their members’ deep fondness for whisky. Beyond barrel picks, better access to top whisky makers, and jaunts to distilleries near and far, it’s a sense of camaraderie and the desire to gain knowledge that make these groups so successful.

“It’s never about just whisky, but the experience about whisky when you’re around people you can call friends,” says Rohan Mirchandani, co-founder and CEO of Drums Food International (of delicious Epigamia yogurt) who heads the Mumbai chapter of Drammersan invite-only club founded in New york in 2013. The club currently has members in 35 cities across the globe. Mirchandani has been at the forefront of organising informal catch-ups centered around rare or unsung bottles. This includes an absolutely exquisite George Dickel 1970 and the award winning Balvenie Port Wood Aged 21 Years.

Women too enjoy whisky
Though the world of whisky has historically been heavily dominated by men, women are now taking to love the alluring spirit. At least 40 percent of the participants at these gatherings are women. “Ask for a whisky at a high end bar and the bartender will look at you with surprise or admiration.”
It’s frustrating. Whisky is a delicious drink that anyone can enjoy,” says hospitality consultant Pooja Vir who along with Carissa Hickling founded ‘The Whisky Ladies of Mumbai’, a women’s whisky club. Julia Ritz Toffoli’s Women Who Whiskey club which launched in 2011has over 10,000 women whisky drinkers with 25 chapters around the globe.
Most of the clubs have no membership fee and rely primarily on existing members to recommend new members. In most cities, tasting events take place at people’s homes, bars, restaurants, distilleries, or even whisky brands' offices.

Tastings go virtual
The pandemic has put a stop to most in-person social gatherings for now, but whisky clubs are still finding ways to come together around their favourite spirit. Informal tastings are now held via Zoom with members receiving small bottles of the whisky beforehand. “We generally hold 3-4 tastings a month. Fun events like blind tastings, whisky and chocolate pairing, whisky and dessert pairing, etc help to keep the fun alive at these meets,” says Sharma. The opportunity to get together (virtually) to share drams is a way for the members to maintain some of the normalcy of life that they don't experience otherwise.

Maharashtra farmer seeks permission to cultivate ganja on his farm

Should you buy… the Samsung Galaxy Z Fold3?

Is Ariana Grande releasing a beauty line? 5 things we’d want to see from it