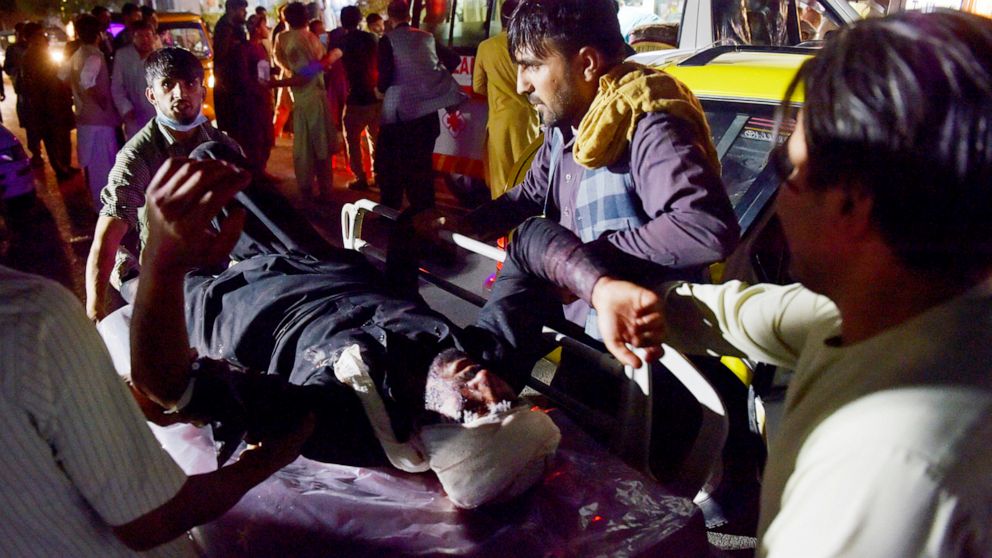 An explosion that killed at least 13 U.S. service members in Afghanistan Thursday was part of a “complex” attack near the Kabul airport, the Pentagon said.

Two ISIS suicide bombers detonated in the vicinity of both the Kabul airport’s Abbey Gate and the adjacent Baron Hotel, according to Gen. Kenneth McKenzie, the commander of U.S. Central Command.

The U.S. service members killed in the explosion near the Abbey Gate included 10 Marines, one Army, one to be determined and one Navy hospital corpsman, or medic, a U.S. official confirmed to ABC News. A 13th service member injured in the attack at Abbey Gate later succumbed to his wounds, a U.S. Central Command spokesperson said Thursday evening.

“We can confirm at this time 10 Marines were killed in the line of duty at Hamid Karzai International Airport. Additionally, several more were wounded and are being cared for at this time,” Maj. Jim Stenger, Marine Corps spokesperson, said in a statement Thursday night.

Another 18 service members were injured in the attack, U.S. Central Command said, up from the 15 initially confirmed by the command.

“We’re still working to calculate the total losses,” McKenzie said during a briefing at the Pentagon Thursday afternoon. “We just don’t know what that is right now.”

The attack marks the third-deadliest single day for American forces in Afghanistan in the 20-year war.

The injured troops are being evacuated from Afghanistan on C-17s equipped with surgical units.

At least 60 Afghan civilians were killed and over 140 others injured in the attack, according to the Associated Press.

The “complex” attack unfolded Thursday evening local time in Kabul, with one explosion at the Abbey Gate causing “a number of US and civilian casualties” and another explosion near the Baron Hotel, a short distance from the gate, Pentagon Press Secretary John Kirby said.

“The attack on the Abbey Gate was followed by a number of ISIS gunmen who opened fire on civilians and military forces,” McKenzie said.

McKenzie said it was his “working assumption” that a suicide bomber was going through the Abbey Gate — being searched and checked by U.S. service members — when the person detonated the vest. The general did not know the size of the bomb or have much information about the explosion near the Baron Hotel. No bomber got onto airport grounds, McKenzie said.

“Clearly there had been a failure” from the Taliban forces checking people outside the airport, the general said.

Hours after the explosions, the militant group ISIS-K, which stands for Islamic State Khorasan Province, claimed credit for the attacks, confirming a suicide bombing.

According to a translation from SITE intelligence group, the Islamic State’s Amaq News Agency issued a report on the attack and provided a photo of the bomber.

The message said the Khorasan Province fighter overcame all security fortifications and reached a distance of “no more than five meters from the American forces.” The fighter detonated his explosive belt, killing 60 and wounding over 100 others, the militant group wrote, citing “military sources,” according to SITE.

McKenzie said the U.S. “will go after” those responsible for the attack “if we can find who’s associated with this,” and that “we believe it is their desire to continue those attacks.”

President Joe Biden reiterated that message during remarks on the attacks Thursday.

Prior to the explosions, the U.S. Embassy had warned citizens on Wednesday to leave the airport.

Acting U.S. Ambassador to Afghanistan Ross Wilson, on the ground in Kabul, told ABC’s “Good Morning America” Thursday morning before the explosions that the threat was “clearly regarded as credible, as imminent, as compelling.”

The airport has been the site of tragedy and chaos for days as people rushed to be evacuated since Afghanistan’s government’s collapsed and the Taliban seized control.

Approximately 104,000 people have been evacuated since the effort began on Aug. 14, the White House said Thursday, with a withdrawal deadline set for Aug. 31. The U.S. State Department said Thursday afternoon it believes around 1,000 Americans remain in Afghanistan, a majority of whom want to leave.

Biden said the U.S. “will not be deterred by terrorists” and vowed to pull the remaining Americans and allies out of Afghanistan.

“These ISIS terrorists will not win. We will rescue the Americans in there. We will get our Afghan allies out,” he said Thursday. “And our mission will go on. America will not be intimidated.”

Biden called the service members killed in the attack “heroes who have been engaged in a dangerous, selfless mission to save the lives of others.”

The Pentagon is going through the next-of-kin notification process. Once that is completed, the president will call the troops’ families, White House press secretary Jen Psaki told reporters Thursday.

“We have some sense … what the families of these brave heroes are feeling today. You get this feeling like you’re being sucked into a black hole in the middle of your chest. There’s no way out,” Biden said. “My heart aches for you.”