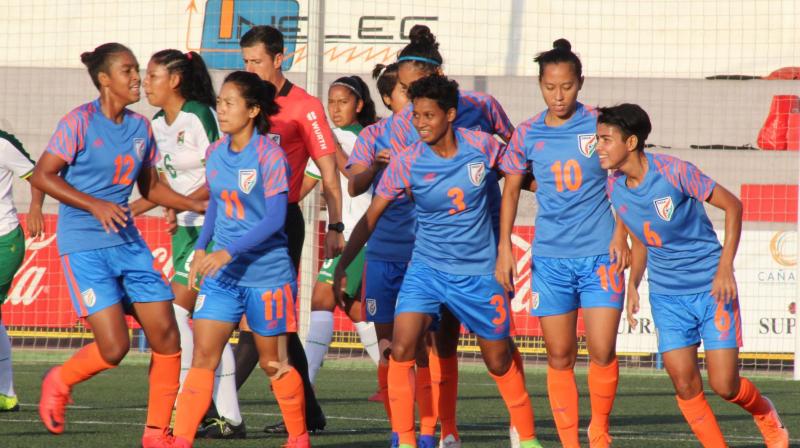 New Delhi: Preparing for the AFC Asian Cup, two of India's top women's team footballers are taking inspiration from their counterparts in hockey, who claimed a historic fourth-place finish at the Tokyo Olympics.

The performances of the Indian athletes in Tokyo have been inspiring for the entire country and national team footballers Aditi Chauhan and Dalima Chhibber feel the same as preparations intensify for the upcoming tournament in 2022.

"We recently saw the women's hockey team make history at the Tokyo Olympics. That honestly inspired me a lot," Aditi said when asked about the opportunity to represent the nation in the AFC Women's Asian Cup, which India is hosting.

Dalima, member of the Indian national team, also referred to the achievements of India's female athletes at the Olympics as a source of motivation.

"I am looking forward to it as an opportunity. In the recently concluded Tokyo Olympics, we saw so many female athletes step up on the global stage," Dalima said.

India won an unprecedented seven medals in Tokyo, including a historic gold in the men's javelin throw event.

While the women's hockey team narrowly missed out on a podium spot in the bronze medal match, they won unanimous plaudits with a best-ever semi-final finish.

In a candid conversation which featured the two national team players, Aditi spoke about leveraging the stage provided by the Asian Cup to set an example for the girls who will participate in the FIFA U-17 Women's World Cup India next year.

"I think if I were in the U-17 team, I would be looking at the senior team (for inspiration). I know there are a lot of young girls that are looking up to the senior team. There are a few girls who have been promoted and called up for the senior team," Aditi said before adding, "all of them have a lot of expectations and see us as examples."

Dalima echoed similar sentiments as she believes the continental competition will serve as a motivation to work harder and a platform to set a precedent.

"I know that in our national team, every player has been working really hard. So, I see it (the AFC Women's Asian Cup) as a step forward and as a motivation to be able to do better and put in a lot more effort. We know that there are a lot of eyes on us and a lot of young players coming up who are looking at us," Dalima said.

The tournament will be held between January 20 and February 6 across three venues — Mumbai Football Arena, D.Y. Patil Stadium and Shiv Chhatrapati Sports Complex.