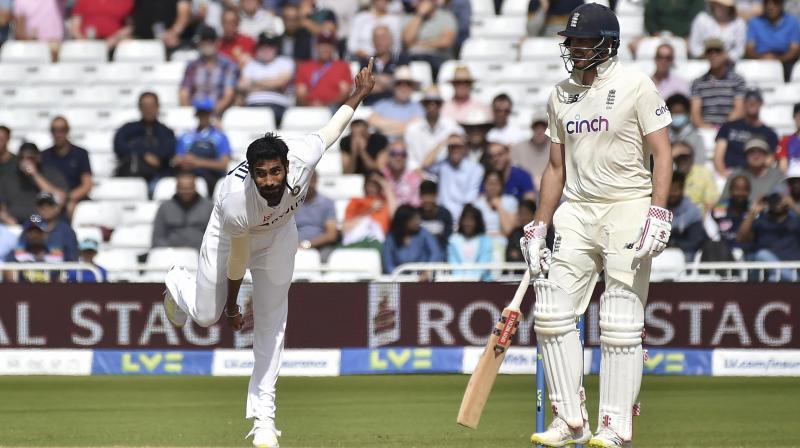 Nottingham: India pacer Jasprit Bumrah hasn't done any special preparation for the ongoing Test series against England, but admitted that little bit of mindset adjustments and staying in the present moment worked wonders for him after a disappointing WTC final against New Zealand.

After a wicketless outing in the World Test Championship final at Southampton prior to this series, Bumrah returned to form with a bang, registering figures of 4/46 and 5/64 to rattle England's batting line-up in the ongoing match.

"Not a lot of adjustments to be very honest, just the mindset adjustments. Probably not looking at the end result, being in the moment, trying to back your skills and enjoy the game of cricket," said Bumrah at the post-day press conference on Saturday night when asked about his preparation after the WTC disappointment

In the inaugural WTC final, which India lost by eight wickets to New Zealand, Bumrah had disappointing figures of 0/57 and 0/35.

"There are not a lot of changes that I have made and I am looking to do. I am just trying to improve my game all the time and trying to add new things, at the same time carrying the things that I still have," added the speedster.

Going into the final day of the opening Test, India need 157 runs to win with nine wickets in hand.

And Bumrah said the visitors aren't looking too far ahead and would concentrate on playing session by session.

"You know when you start playing the game of cricket, you have to believe in yourself that you want to win and play to win, but we don't want to look too far ahead. We have got a good start and we just want to take session by session.

"We will go tomorrow morning with a good mindset and hopefully take things from there," he said.

After bundling out England for a meagre 183, India rode on KL Rahul's classy 84 and Ravindra Jadeja's 56 to score 278 and take a valuable 95-run first-innings lead.

Despite skipper Joe Root's stroke-filled 109, England were bowled out for 303 in their second innings, giving India a 209-run target to chase.

"We got to know about the news when we came inside for lunch. And we were hearing that he was in the finals, so congratulations. Just participating in the Olympics is a big achievement, representing your country a lot of hard-work goes there.