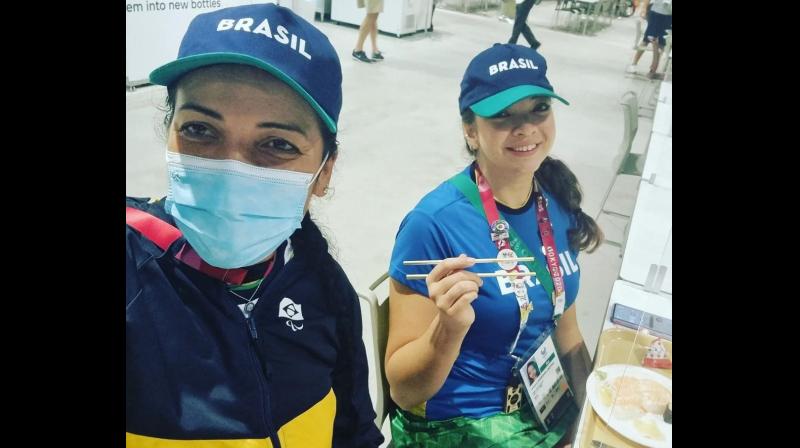 Tokyo: Jane Karla Gogel and Lethicia Rodrigues Lacerda are one of the two parent-child duos competing at the Tokyo 2020 Paralympics and the younger one feels that the experience of participating alongside her mother is nothing short of magical.

What separates them from Greek father-and-son Lazaros Stefanidis and Leontios Stefanidis, who compete in athletics, is that this Brazilian mother-daughter pair competes in different sports.

Paddler Lacerda, 18, is delighted to receive some Paralympic tips from her mother, archer Jane Karla Gogel, who is also a former TT player.

Despite swapping her ping pong paddle for a bow and arrow, archer Gogel, 46, has been able to share some inside knowledge of her former sport with her table tennis-playing daughter.

Lacerda, making her Paralympic debut at Tokyo 2020, and faced former European champion Aida Dahlen of Norway on Wednesday with the benefit of advice from her mother, who competed regularly against the Norwegian.

"We had many tough battles against each other," Gogel told the games information system when asked about Dahlen.

"By knowing some of her weaknesses I could share them with Lethicia."

Despite the parental tips, Rodrigues Lacerda lost 3-0 to the world No.3 in the women's singles class 8 but that did not dampen her spirits.

"It's very special to be with my mum here," she said.

"We are both able to participate and share our emotions. Everything is very magical."

The 18-year-old will next face Huang Wenjuan of China.

She said her mother, who is competing at her fourth Paralympics and her second as a para archer, is her best friend and has been her biggest influence.

"Maybe in the future I can try another sport in the Paralympics," the teenager said of following in her mother's footsteps.

"I like everything, but table tennis the most. I want to try sitting volleyball one day."

Gogel is hopeful the pair can compete together at future Paralympic Games.