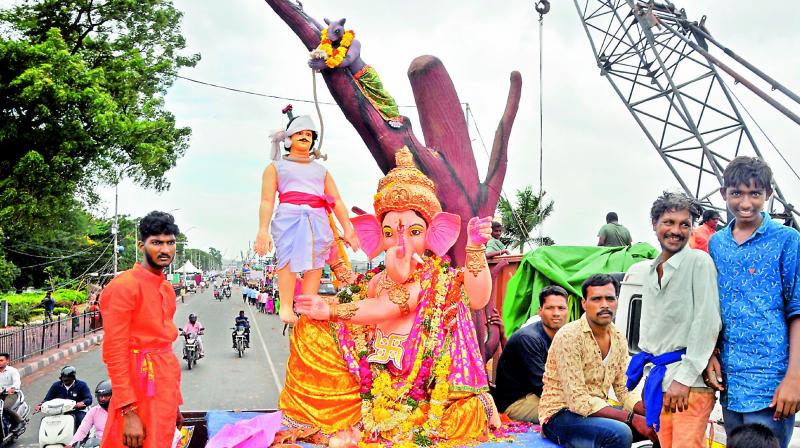 Hyderabad: The state government decided to not impose any height restrictions on Ganesha idols in the city this year for the festival next month. The government has assured that Ganesha festivities would be conducted on par with Bonalu on a grand scale while following Covid-19 protocols.

This was stated by minister Talasani Srinivaas Yadav after holding a review meeting with chief secretary Somesh Kumar of the Bhagyanagar Utsav committees and other officials.

The minister instructed police officials “not to trouble or cause any inconvenience” to pandal owners on height restrictions and asked them to brief junior officials accordingly.

Director-General of Police M. Mahendar Reddy who was present at the meeting informed the minister that in 2019 about 33,000 Ganesh idols were immersed in the GHMC limits using 300 cranes. He said 30,000 police personnel had been deployed for the festivities. He said based on the installation of idols, security arrangements and cranes will be deployed accordingly.

Srinivas Yadav instructed GHMC commissioner D.S. Lokesh Kumar to take up road repairs on the Ganesh procession routes which were damaged by the recent rainfall. He asked the civic body to clean the baby ponds and other water bodies immediately.

He instructed the electricity department officials to set up mobile transformers for interrupted power supply and asked the police to coordinate with the roads and buildings department to provide a sufficient number of barricades.

To curb water pollution, Srinivas Yadav requested citizens to prefer clay idols and said that the HMDA would distribute 70,000 idols, the GHMC 30,000 and the endowments department would distribute 40,000 clay Ganesh idols.

Chemicals are not all bad