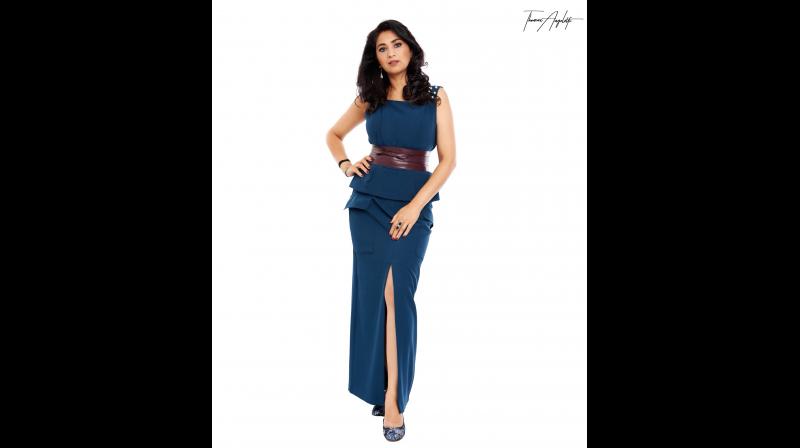 While the film was directed by Alex Rogers, Anjali, produced, co-wrote and starred in the two-minute short, which focuses on body positivity, diversity and inclusivity. “I am overwhelmed with the award,” an excited Anjali told us, adding how much of a great honour it is to win the award and how much it means to her.

“This is my maiden project and I couldn’t have asked for better recognition,” says Anjali, beaming. Her film appears to be an extension of Anjali’s beliefs, who points out to us that body-shaming, gender inequality and LGBTQ community acceptance are among the big issues plaguing the world today.

The designer was apparently inspired to make the film after listening to stories of discrimination in Florida in April this year, where she’d been to design the fashion show wardrobe for an NGO.

“I’d always wanted to make something meaningful in the field of fashion. But after listening to stories of domestic violence and human trafficking, I decided to make a film on discrimination,” reveals Anjali, who was herself subjected to racism when she had relocated to the US several years ago. Anjali, who was also Miss Haryana 2000, tells us she always believed in the strength of cause-based films in inspiring and uplifting many communities.

“I believe we can change the world through unity and that we should be kind and inclusive,” says the 38-year-old. She also chose a cast who were earlier subjected to discrimination at some point in their lives.

The film’s cast, apart from Anjali, included Mounika Siriguppi, Arunita Ghosh, Vincent Natasha Gay, Clare Delune, Lina Lelli and Resha Sukoshi. “I believe in using my designs and attitude to empower women of all shapes, sizes and colours. And given my film’s title, I wanted to implement and lead by example,” adds the designer.

Anjali, who has two Masters Degrees — in Philosophy and Computer Science — works for an investment bank in the US in addition to being a mother of a nine-year-old daughter. She admits that balancing work and her passion of being in the fashion world has been challenging.

“I think there’s time for everything; it’s just that you have to prioritise your tasks accordingly. Once you can do that, striking a work–life balance is easy,” she explains. “I believe the size of success is measured by the strength, desire and size of your dreams. And this award has inspired me to do more while ensuring I am more responsible,” she says, signing off.

Recently, the Ohio State University honoured Anjali by recognising her efforts. She was also invited to design clothes for the University’s forthcoming fashion show.

No restriction on height of Ganesh idol in Telangana this year

Chemicals are not all bad