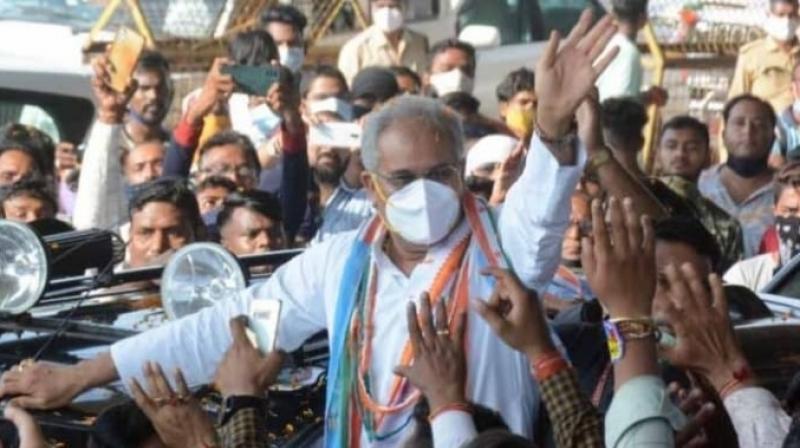 Raipur: A day after he seemingly blunted the threat to his chair posed by his ministerial colleague, T.S. Singh Deo, Chhattisgarh chief minister Bhupesh Baghel on Saturday held a "victory procession" here on his arrival from Delhi.

Mr Baghel staged a massive show of strength at the airport with hundreds of Congress workers raising slogans in support of him and later taking him in a procession from the airport to his official residence.

The chief minister was seen waving to his supporters as his convoy, followed by around 2,000 bikes carrying his followers, sped through the streets of Raipur.

As many as  53 out of total 70 Congress MLAs, including around a dozen ministers in his Cabinet, accompanied him on his flight from Delhi.

The ruling party legislators had been camping in Delhi for the last couple of days to mount pressure on the party high command not to change the leadership in the state.

Mr Baghel had on Friday flown to Delhi, his second visit to the national capital in a week, after being summoned by the Central party leadership to resolve the crisis in Congress in Chhattisgarh triggered by the power struggle between him and Mr Singh Deo.

Mr Singh Deo has been demanding that the party high command "honour" the purported agreement of sharing the chief minister’s post between Mr Baghel and him for two-and-a-half years each, reached during the formation of the Congress government in Chhattisgarh in 2018.

Mr Baghel, however, has quoted AICC general secretary in-charge of Chhattisgarh, P.L. Punia, to deny any such agreement.

Mr Baghel had a marathon meeting the Gandhi siblings, Rahul and Priyanka, in Delhi on Friday to end the month-long impasse.