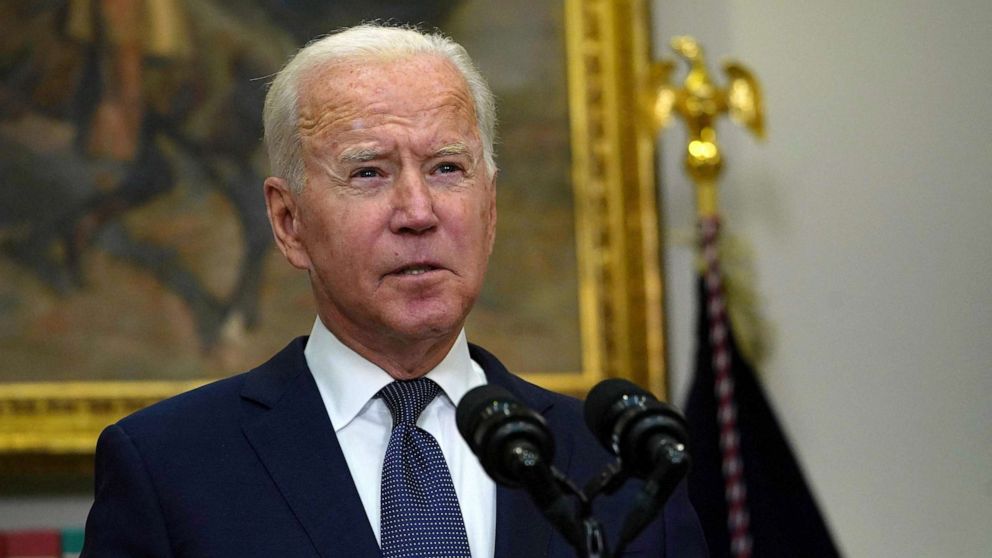 Chaos continues in Afghanistan as time is ticking on the evacuations of Americans and Afghan allies from Kabul ahead of the Aug. 31 withdrawal deadline, but President Joe Biden is now indicating the evacuation mission could be extended.

“There’s discussions going on among us and the military about extending,” Biden told reporters Sunday. “Our hope is we will not have to extend, but there are going to be discussions, I suspect, on how far along we are in the process.”

But the Taliban warned Monday that a withdrawal extension would cross a “red line.”

“If they extended, that means they are extending occupation. While there is no need for that, I think that we will treat the relation, that will create mistrust between us. If they are intent on continuing the occupation, so it will provoke a reaction,” a Taliban spokesperson told Sky News in an interview.

The Pentagon is reportedly seeking the help of commercial airlines to relocate evacuees in the hopes of preventing bottlenecks in third-party nations where military flights are arriving after leaving Kabul.

The details of how quickly the situation devolved remain murky. In an exclusive interview with ABC News’ Martha Raddatz on “This Week,” Secretary of Defense Lloyd Austin said there was a “wide range of assessments” about the speed with which the Taliban could take over Afghanistan. Austin was mum on if he advised President Biden to keep a military presence. There have been reports that Biden didn’t heed the recommendations of top officials in his withdrawal plan.

“I’m not gonna tell you what my recommendation to our president was. I will just tell you that, like everyone else, the president listened to our input,” Austin said. “He conducted a very rigorous and thoughtful process and he made a decision, and I support that decision.”

Biden is facing fierce backlash from Republicans about the ongoing evacuations. Many are calling for the U.S. to ramp up the evacuation efforts by sending more troops into Kabul to retrieve American citizens and Afghan allies. On “This Week,” Sen. Joni Ernst, R-Iowa, a combat veteran, called the evacuation effort “one of the biggest debacles that we have seen in the last several decades.”

The RUNDOWN with Quinn Scanlan

For weeks, the Food and Drug Administration has assured Americans that granting full approval to the Pfizer COVID-19 vaccine has been the department’s top priority as cases and hospitalizations surge to levels not seen since latter half of the winter.

Dr. Anthony Fauci has said he expects full approval is likely by the end of August, but the New York Times reported Friday that it could come as soon as Monday.

While the FDA declined to comment, and the Times story indicated the review process could delay approval beyond Monday, U.S. Surgeon General Vivek Murthy told ABC “This Week” co-anchor Martha Raddatz on Sunday that he “wouldn’t be surprised if they issued that full approval soon.”

As the delta variant rages across the country, vaccination rates have ticked up slightly. On Saturday, the White House’s COVID-19 data director announced that for the first time in over two months, more than 1 million doses were administered per day over three consecutive days.

Over 70% of all eligible Americans have gotten at least one shot, but the question now is, will full FDA approval spur those who are eligible but unvaccinated to go get it, too.

A June poll from the Kaiser Family Foundation suggested it may do that to some degree, but look no further than former President Donald Trump’s Saturday night rally in Alabama — the state with the lowest vaccination rate — for evidence that convincing a group of vaccine-resistant Americans may not be as easy as giving the vaccine a final stamp of approval.

When Trump recommended the vaccine, which he took credit for, to the packed, maskless crowd of supporters, he wasn’t met with applause — he was met with boos.

New York Gov. Andrew Cuomo begins his final day in office focused on Henri, the storm bearing down on the Northeast. He declared a state of emergency in New York on Sunday and appeared on broadcasts to talk about the storm.

His delayed resignation — which he set for Tuesday, two weeks after announcing that he would step down — prevents Lt. Gov. Kathy Hochul from being the face of the state’s response amid the emergency.

Nevertheless, Hochul tweeted on Sunday morning that she had joined the call between the president, Cuomo and other governors in preparation for Henri. And the storm’s impacts are expected to still be evident in the state when she succeeds Cuomo.

Notably, Cuomo and Hochul ended last week worlds apart from each other.

Cuomo’s attorney gave a statement by video on Friday contesting some details in the report on allegations against Cuomo. The same day, Hochul — who recently told NBC’s “Today” that she would be running for governor in 2022 — tweeted photos of herself feeding a cow and seeing a butter sculpture at the New York State Fair.

FiveThirtyEight’s Politics Podcast. Earlier this month, the United Nations’ Intergovernmental Panel on Climate Change released the first part of its latest global climate assessment report. The report relies on advanced climate modeling to illustrate for policymakers where global warming is headed. In this installment of Model Talk on the FiveThirtyEight Politics podcast, Nate Silver and Galen Druke are joined by two climate modelers and authors of the latest IPCC report, Friederike Otto and Baylor Fox-Kemper. They unpack the findings in the report and discuss how climate models work. https://53eig.ht/3k5D0ib