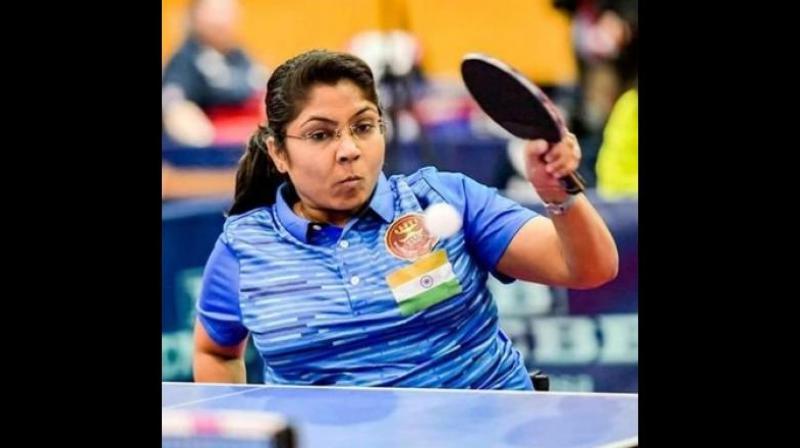 Tokyo: Bhavinaben Patel on Friday scripted history by becoming the first Indian table tennis player to secure a medal in the Tokyo Paralympics, setting the tone for an upbeat contingent aiming for its best-ever finish at the Games.

Feeding off the momentum generated by India's best showing at the preceding Olympics, Patel, competing in her maiden Paralympics, ensured a podium for herself by entering the semifinals with a stunning straight-game win over world number five Borislava Peric Rankovic of Serbia in the women's singles Class 4 event.

"I could win my match today due to the support of the people of India. Please keep supporting me so that I can win my semifinal match," Patel said after the quarterfinal.

In the day's other events, Indian powerlifter Sakina Khatun finished a creditable fifth in the women's 50kg category while compatriot Jaideep failed to log a single legal lift in the men's 65kg event.

The 2014 Commonwealth Games bronze medallist Khatun had the best effort of 93kg.

The other Indian powerlifter in action, Jaideep had a bad day in the office, failing all his three attempts in the men's 65kg category.

In archery, Indian compound archer Rakesh Kumar shot a career-best 699 points out of a possible 720 to grab the third place in the ranking round of the men's open section.

World No. 11 Kumar, who won an individual gold medal at the first world ranking tournament in Dubai earlier this year, narrowly missed out the second spot to Iranian Ramezan Biabani who also totalled 699 but placed higher than the Indian for shooting more arrows closest to the centre (X).

The Indian shot 53 perfect 10s, including 17 closest to the centre, while his Iranian rival had 18 Xs.

Another Indian in fray, Shyam Sundar Swami finished a lowly 21st with 682 points. Both the Indians were seeded straight into the second round in the draw of 64.

World No. 22 Jyoti Baliyan, who is the only Indian female member to have qualified for the Paralympics, secured a 15th place ranking in the compound open event.

The highlight of the day undoubtedly was Patel reaching the semifinals and grabbing a medal, the colour of which will be decided on Saturday.

She takes on Zhang Miao of China in the semifinals. There is no bronze-medal play-off in Tokyo Paralympics table tennis, and both losing semi-finalists are guaranteed of a bronze.

"It is sure that we can see a medal from her. Tomorrow morning's match (semifinal) is a huge decider what colour of the medal she will win," Paralympic Committee of India president Deepa Malik said in a video footage on her Twitter handle.

In 2017, the International Paralympic Committee (IPC) Governing Board had approved the International Table Tennis Federation's request to remove the third-place play-off in all the medal events and award bronze to both the losing semi-finalists.

Earlier in the day, she had beaten Joyce de Oliveira of Brazil 12-10 13-11, 11-6 in Round of 16 to become the first Indian table tennis player to reach the quarterfinals in the Paralympics.

Athletes in Class 4 category have fair sitting balance and fully functional arms and hands. Their impairment may be due to a lower spinal-cord lesion or cerebral palsy.

She had entered the knockout round after winning one match and losing the other group game.

Compatriot Sonalben Manubhai Patel had lost both her group matches on Thursday to bow out of the competition.

Before Patel's historic achievement, the 32-year-old Khatun lifted 90kg in her first attempt in powerlifting. She went for 93kg in her second attempt but failed, and managed to lift that weight in her third try.

Khatun became the only Indian woman Paralympian to ever win a Commonwealth Games medal when she claimed bronze in 2014 in Glasgow. She is also a 2018 Para Asian Games silver medallist.

The 31-year-old Jaideep unsuccessfully tried to lift 160kg in his first two attempts. He added seven more kilograms to the barbell to make it 167kg in his third and final attempt but was unable to lift it.

Powerlifting is open to athletes with an eligible physical impairment in their legs or hips, which would prohibit them from competing in able-bodied (standing) weightlifting.

There is only one sport class in powerlifting, but the athletes compete in different weight categories.

In archery, a team silver medallist at the Asian Para Championships in 2019, Jyoti shot 671 points. She and Kumar got sixth ranking in the compound mixed pair open category.

The duo will open their campaign against Thailand in the compound mixed pair open which has a draw of 16.

In the men's recurve open category, Chikara finished in top-10 after shooting 609 points, ahead of 2018 Para Asian Games champion Harvinder Singh who qualified as 21st seed.

The open event combines W2 (Wheelchair 2) and ST (Standing) classes. Athletes who have an impairment in the legs and use a wheelchair or have a balance impairment and shoot standing or resting on a stool can compete in open category.

In para archery, the use of assistive equipment or an assistant is allowed depending on the impairment, while a variety of techniques may be employed, including pulling the bowstring with the mouth.