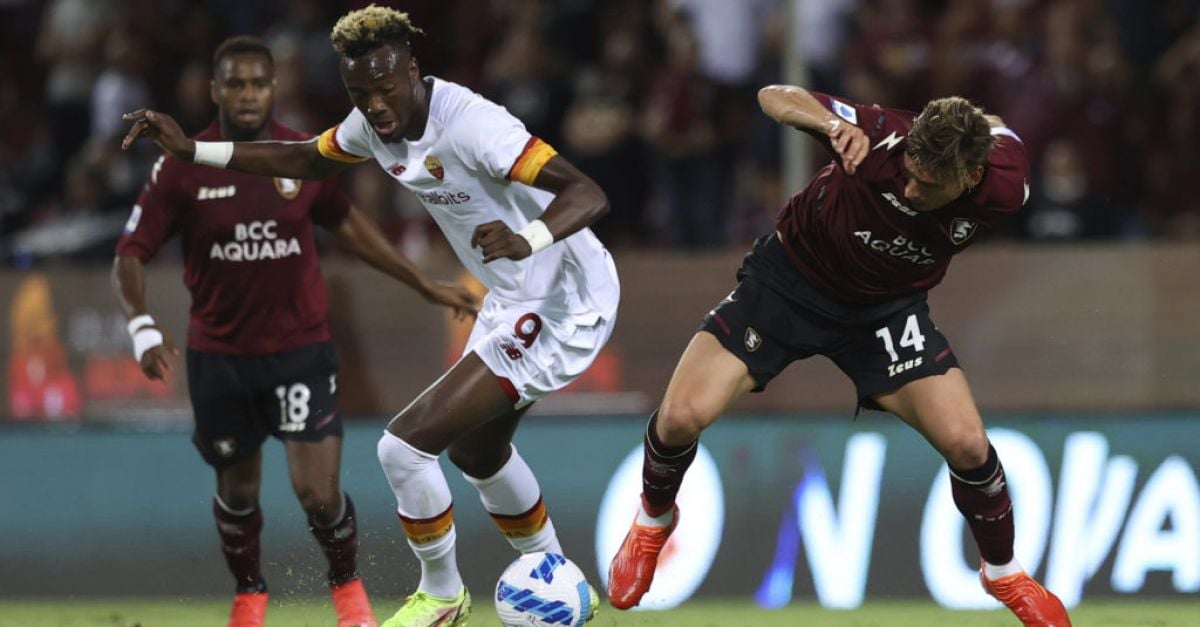 Tammy Abraham scored his first Serie A goal for Roma as they cruised to a 4-0 win at Salernitana.

The England international, who linked up with Jose Mourinho when he made a £34 million switch from Chelsea earlier this month, scored Roma’s third goal with a fine finish after Lorenzo Pellegrini and Jordan Veretout had put them in control.

Pellegrini’s second goal of the game wrapped up a routine win.

⚽️ Off the mark in Serie A! 💪
#ASRoma #SalernitanaRoma pic.twitter.com/pxV7VEzfBc

Another former Chelsea striker, Olivier Giroud, scored twice for AC Milan as they claimed a convincing 4-1 victory over Cagliari. Napoli won 2-1 at Genoa and Sassuolo played out a goalless draw with Sampdoria.

Barcelona handed teenager Gavi his competitive debut in their 2-1 win against Getafe.

The 17-year-old midfielder impressed as first-half goals from Sergi Roberto and Memphis Depay ensured Barca made it two wins from two at the Nou Camp this season.

Luis Suarez was on the scoresheet as a stoppage-time own goal from Aissa Mandi ensured Atletico Madrid secured a point in a hard-fought 2-2 draw with Villarreal.

The former Liverpool man cancelled out Manu Trigueros’ opener, only for ex-Bournemouth winger Arnaut Danjuma to retake the lead for the visitors.

It looked as if Villarreal would put an end to Atletico’s unbeaten start to the season, but Mandi’s own goal in the fifth minute of stoppage time earned Atletico the draw.

Gavi's first Barça appearance comes at the age of 17 years and 24 days! 🤩 pic.twitter.com/NxIHUmyHMs

Rayo Vallecano had four goalscorers – Alvaro Garcia, Oscar Trejo, Randy Nteka and Santi Comesana – in a 4-0 thrashing of Granada, who have yet to win a LaLiga game this season.

And stoppage-time goals from Roberto Torres – a penalty – and David Garcia stunned Cadiz as Osasuna snatched a 3-2 win.

Lionel Messi had to settle for a substitute appearance as Kylian Mbappe stole the headlines with both goals in Paris St Germain’s 2-0 win at Reims.

Entering the action in the 66th minute to replace Neymar, the Argentinian’s first touch was greeted with screams and cheers from the 6,000 travelling fans.

But it was reported Real Madrid target Mbappe who stole the show, opening the scoring after 15 minutes and wrapping up the points just after the hour.

📸 The first step for Leo Messi in the 🔴🔵#SDRPSG pic.twitter.com/tuMP7HPHIk

Yusuf Yazici had opened the scoring for Lille in stoppage time at the end of the first half, but there was still enough time for Gaetan Laborde to equalise before the half-time whistle.

Jonathan David scored the winner before Montpellier’s Junior Sambia was shown a straight red card with just over 15 minutes remaining.

A goalkeeping howler from Rennes’ Alfred Gomis gifted Angers their opening goal in a 2-0 win that moved them third, while Clermont drew 2-2 with Metz and Lens played out the same result against Lorient.

The touch.
The control.
The finish.

In the Bundesliga, table-topping Wolfsburg maintained their perfect start to the season with a narrow 1-0 win over RB Leipzig.

Jerome Roussillon scored the only goal of the game just after half-time. Union Berlin also secured a 2-1 win over Borussia Monchengladbach.