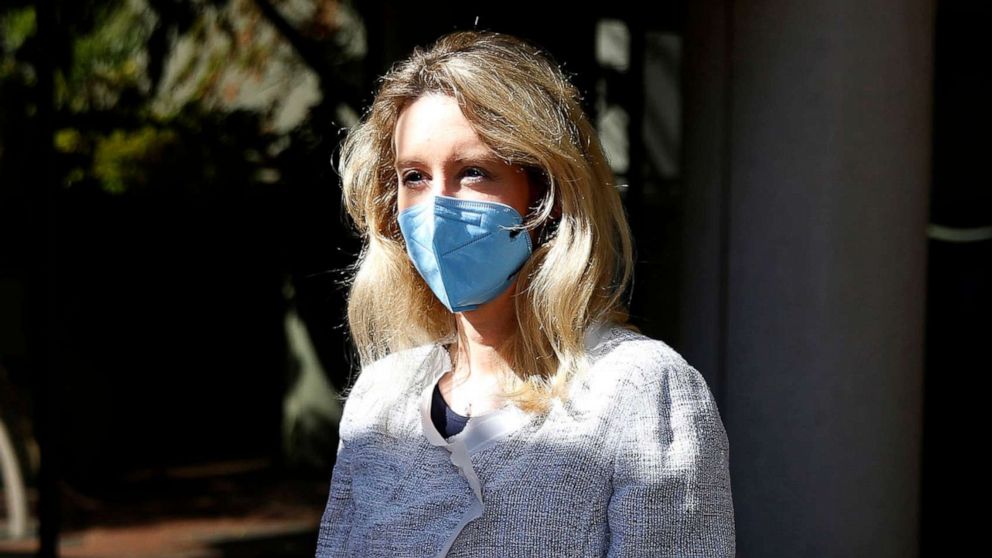 Subscribe and listen to new episodes of the ABC Audio podcast, “The Dropout: Elizabeth Holmes on Trial” at the end of this article.

Jury selection for the trial of Theranos founder Elizabeth Holmes begins Tuesday in San Jose, California, following Holmes’s allegations of abuse against her former boyfriend and Theranos COO, Ramesh “Sunny” Balwani, that came out over the weekend.

Holmes is charged with wire fraud and conspiracy to commit wire fraud stemming from a “multi-million-dollar scheme to defraud investors, and a separate scheme to defraud doctors and patients,” according to the Northern District of California United States Attorney’s Office.

The pair were originally charged together, but the trials were severed in January 2020 for a reason that was undisclosed until newly unsealed court documents revealed that Holmes alleged just seeing Balwani could trigger “debilitating PTSD symptoms.” Her team has also signaled that Holmes will likely be testifying at the trial, which would be hindered if Balwani were present.

One filing states that Holmes and Balwani “had an abusive intimate-partner relationship” and that Balwani had “psychological” and “emotional” control over Holmes, creating a pattern of “abuse and coercive control.”

The documents detail evidence that Holmes plans to introduce, including claims that Balwani controlled “what she ate, how she dressed, how much money she could spend, who she could interact with.” They allege Balwani “monitored her calls, text messages and emails and was physically violent — throwing hard, sharp objects at her, restricting her sleep and monitoring her movements.”

“The defense made this argument that Elizabeth has suffered so greatly at the hands of Balwani … and that therefore she couldn’t even maintain her composure physically at the trial. That’s a pretty devastating allegation to me,” criminal defense attorney Caroline Polisi told ABC News’ Rebecca Jarvis on “The Dropout: Elizabeth Holmes on Trial.”

ABC News reached out to Balwani and his counsel, but requests for comment were not returned.

Back in December of 2019, Holmes’s team shared that they intended to introduce expert evidence from clinical psychologist Dr. Mindy Mechanic, who specializes in the psychological consequences of violence against women. Her testimony will concern the alleged abuse Holmes claims to have suffered at the hands of Balwani. Court documents show that Mechanic evaluated Holmes for 14 hours and interviewed her parents and brother.

Balwani’s lawyer Jeffrey Coopersmith has called Holmes’s allegations “salacious and inflammatory.” He said the claims are “deeply offensive to Mr. Balwani, devastating personally to him.” Balwani denies all allegations of abuse.

One former Theranos employee told ABC News he finds the allegations hard to believe given what he witnessed at the company. “Did I see any of the alleged abuse toward Elizabeth? No. In fact he seemed to defer to her in public,” said Kevin Hunter. “And remember, when push came to shove, she fired him.”

Hunter, a lab consultant who worked with Walgreens to vet Theranos technology, also said it seemed clear to him that Holmes was in charge.

“Sunny [Balwani] was a distant second … she came up with the plans and the strategies and he helped execute them. He was the bad guy, but she ran the meetings. He rarely participated unless it had something to do with IT. … It was clearly the Elizabeth show. There’s no question about it,” Hunter told Jarvis on “The Dropout: Elizabeth Holmes on Trial.”

Legal experts say that the prosecution will be able to introduce evidence of Holmes’s behavior before Balwani joined the company and after leaving Theranos.

“They are really going to have to make an effort not to be perceived as victim blaming,” Polisi said, adding that the prosecution needs to acknowledge the alleged abuse inflicted on Holmes, “while simultaneously really maintaining their argument that it did not negate her state of mind, that she still knew that she was misleading investors.”

Holmes’s defense team fought to keep the documents sealed until after a jury was selected because of the anticipated media coverage, but the judge presiding over the case, United States District Judge Edward Davila, ultimately ruled it appropriate to unseal ahead of jury selection.

Approximately 200 potential jurors have filled out jury questionnaires from both the prosecution and the defense prior to selection. Both sides must agree on 12 jurors and five alternates.

Davila heavily edited the questionnaire originally proposed by the defense, cutting it nearly in half from 45 pages to 28 pages, according to court filings. Many of Davila’s changes were related to the specificity with which the defense was asking potential jurors about their media habits, court filings said.

For example, the defense originally presented potential jurors with a list of 46 different periodicals and magazines, which the judge removed.

“Rather than give them a list, I’ve taken and asked them to take the affirmative duty to inform us, what do you read? What do you watch? What do you listen to?” Davila explained in a pre-trial hearing in June.

Despite initial fears from Holmes’ defense team regarding the ability to find unbiased jurors due to the extensive media coverage of Holmes, more than half of the prospective jurors who have filled out questionnaires said they have never heard of Holmes, according to the government during a pre-trial hearing.

Potential jurors will be ushered in 50 at a time, and voir dire or jury examination will be held in three separate sessions.

“Jury selection really is one of the most, if not the most, important parts of the trial, because it only takes one juror to get that hung jury or get a not guilty verdict,” Polisi said.

“They [the defense] don’t want to let anybody in who may harbor feelings of resentment or ill will toward Elizabeth Holmes just based on reporting that they’ve read,” she said. “Their ideal person, perhaps is somebody who either A. doesn’t know much about this story, which is going to be hard to find, or B, actually feels some sense of fondness towards Elizabeth Holmes or has something in common.”

Many potential jurors have already been dismissed because of the amount of information they’ve consumed about Holmes. Her rise and fall captivated the country. She was the Stanford dropout who claimed to have created revolutionary blood testing technology that was poised to change the future of health care. Her company, Theranos, was once valued at nearly $10 billion, which, at the time, made her the youngest self-made female billionaire. She graced the covers of magazines, spoke at conferences and appeared on most major news outlets. But Holmes faced a massive fall from grace when insiders within the company exposed that the technology didn’t work.

It’s been more than three years since Holmes was charged with multiple counts of fraud, which could send her to prison for decades if convicted. Throughout it all, she has maintained her innocence and seemingly has been living life to the fullest.

She is married to hotel heir William “Billy” Evans, and the pair welcomed their first child, William Holmes Evans, on July 10. The announcement of her pregnancy during a pretrial hearing in March delayed her trial, which was previously delayed due to the pandemic, for the fourth time.

But now, 1,266 days since being charged, Holmes is going to trial.

Holmes and her counsel did not respond to ABC News’ repeated requests for comment.

Listen to new episodes of “The Dropout: Elizabeth Holmes on Trial” HERE.

New episodes of “The Dropout” are available for free on Apple Podcasts, Spotify, Amazon Music, or wherever you listen to podcasts. Click here to find the show on your favorite app.