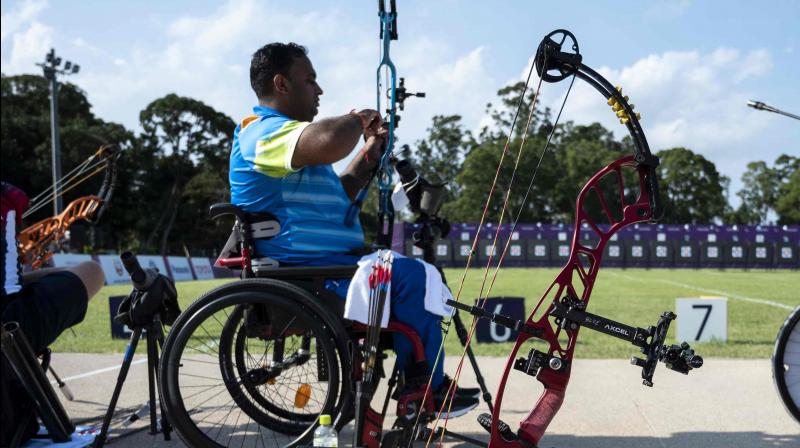 Tokyo: India's mixed team of Rakesh Kumar and Jyoti Balyan on Sunday stormed into the quarter-final of the Compound Archery Mixed Team event in the ongoing Tokyo Paralympics here at the Yumenoshima Final Field.

The Indian pair defeated Thailand's Praphaporn and Anon by 147-141 in the round of 16. Rakesh and Jyoti displayed their A-game in the entire match, giving no respite to the Thai pair.

In the first two sets, the Thailand duo edged Indians by one point. However, Rakesh and Jyoti staged an outstanding comeback in the third set, as they brought the scoreline to a one-point advantage. In the fourth set, Indian archers were clinical as they shot 9, 9, 10, 10, meanwhile Praphaporn and Anon aimed 8, 8, 8, 9 which handed the win to India. Later in the day, India will play against Turkey in quarters.

On Friday, after a spirited performance in the men's ranking round by Rakesh Kumar, the Indian mixed team of Jyoti Balyan and Rakesh was seeded 6th for the compound archery event.

Kumar gathered a personal best of 699 points out of a possible 720, hitting 53 10s and 17 X's in his 72 arrows. Notably, Rakesh's score was better than the previous Paralympic Record of 687, which has now been obliterated by China's He Zihao who goes two short of the world record and took the top seed (705).

In the mixed team, the Chinese are again top-seeded with a Paralympic Record of 1388 against their name. Russian Paralympic Committee's archers are seeded second while Turkey took the third spot. India's Jyoti and Rakesh's score read 1370.