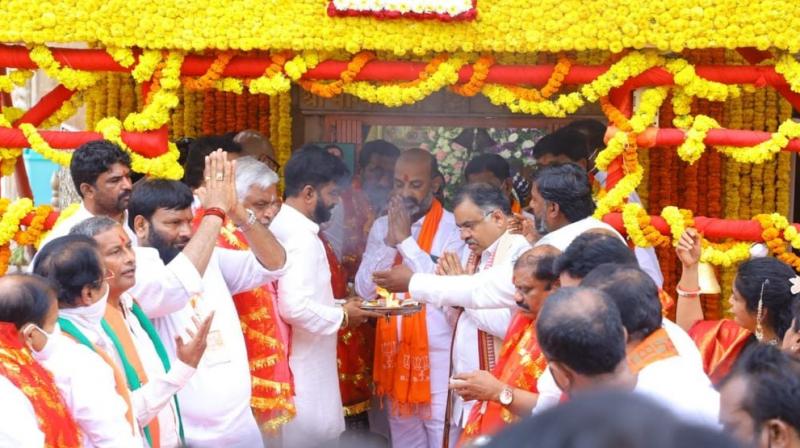 HYDERABAD: BJP state president Bandi Sanjay Kumar intensified his attack on the Majlis-e-Ittehadul Muslimeen (AIMIM) and the ruling Telangana Rashtra Samiti (TRS) on the third of his padayatra on Monday. Sanjay Kumar said the BJP would humiliate both the parties, if they did not stop humiliating Hindus, who comprise 80 per cent of the population, and provoking them with hate speeches.

Sanjay sustained some injuries to his toes and underwent physiotherapy treatment twice. The BJP leader addressed thousands of activists at the Aramaisamma temple premises as part of his Praja Sangrama Yatra.

Stating that Goddess Bhagyalakshmi had witnessed the BJP activists breaking MIM barriers in the Old City of Hyderabad, Sanjay said he was confident that his party would dominate not only the old city, but would flourish in any basti, adding that it had the courage to go to any town and hoist the saffron flag.

All Nizams’ palaces and properties were built in the land of Hindus and if the BJP came to power in Telangana in 2023 it would take over all assets of the Nizams and convert them into Hindu properties, he said.

He pointed out that the MIM opposed formation of separate Telangana, but the TRS was allying with it and looting Telangana. Recollecting the role of senior BJP leader late Sushma Swaraj in the formation of Telangana, Sanjay Kumar expressed dissatisfaction over the TRS government and alleged that Chief Minister K. Chandrashekar Rao ignored all his promises.

“His family has a history of buying acres of land from farmers at a low rate and selling it at Rs 50,000 per yard. Chandrashekar Rao, his son Rama Rao, son-in-law and daughter K. Kavitha are planning to build empires in government lands using Go 111 GO. People in Kokapet area are suffering a lot and the government is selling lands belonging to SCs, STs and BC’s,” he said. He alleged that Telangana was captured by Kalvakuntla family and said the BJP would only provide freedom to people of state.