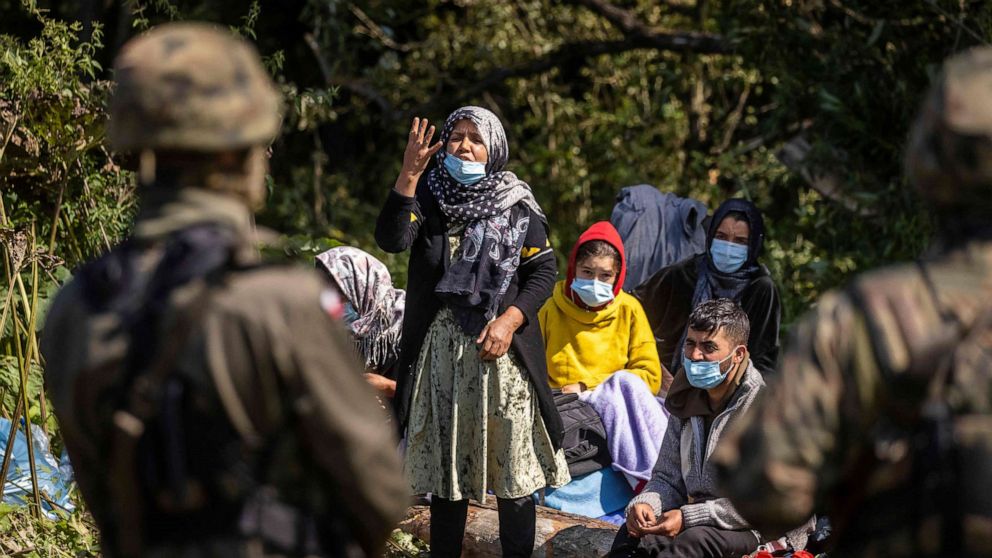 The situation of the 32 Afghans—short of food and some seriously ill, according to local activists—has attracted intense attention in Poland and internationally.

The standoff is a result of the surge in migrants arriving at the European Union’s borders that has been engineered by Belarus’ authoritarian leader Alexander Lukashenko as suspected retaliation against the bloc for its support for the pro-democracy movement that has called for him to step down.

European officials have accused Belarus’ authorities of flying in migrants and then funneling them to its western borders with the goal of orchestrating a migration crisis meant to pressure its European neighbors. So far this year, over 4,000 people—mainly from Iraq and Afghanistan—have illegally crossed from Belarus into neighboring Lithuania. That is 50 times more than all of 2020, according to officials. Poland, which is far larger than Lithuania, recorded over 3,000 illegal crossings since the start of August.

The governments of Lithuania and Poland have said they cannot absorb the influx and hurriedly deployed more security officers and put up a new border fence. The Polish government on Tuesday announced it was seeking a state of emergency for the border zone. The Belarusian security forces meanwhile have been filmed in full riot gear trying to force migrants back toward the border after they are turned back.

The 32 Afghans trapped at the border at Usnarz Górny have found themselves caught in the middle. Last week, Fundacja Ocalenie, a Polish charity that works with refugees, and an opposition member of parliament managed to pass them tents, food and clothing, but since then Polish border guards have blocked them from approaching the group, a spokeswoman for the charity said.

“It is terrible conditions,” said Marianna Warteska, the spokeswoman, told ABC News by phone from close to the border. “They are not receiving any kind of medical assistance—their health is deteriorating.”

She said the group was drinking unclean water from a nearby stream and surviving off bread delivered by the Belarusian guards every couple of days. The volunteers have been communicating with the Afghans via megaphone, she said, but Polish guards would often turn on their vehicle engines and sirens to try to drown them out.

Eight of the Afghans were suffering from kidney issues and five had diarrhea, according to Warteska. She said one 26-year-old man lost consciousness for 20 minutes on Thursday but the border guards refused to call an ambulance. She warned another woman in her fifties has been unable to leave her tent for several days.

A spokeswoman for Poland’s border service on Tuesday declined to comment to ABC News.

Warteska said all 32 Afghans had expressed a desire to seek international protection in Poland and had legal representation from her organization. There was no reason, she said, why the Polish authorities could not take the group for standard processing that would then assess whether they should be granted asylum or returned to their home countries. The decision to keep them in limbo was political posturing, she said.

“It’s really cruel. And it has basically no purpose,” she said. “Because you know it’s 32 people—they are able to process them. It’s not like it is 3 million standing here. We are not asking just for a free pass. We just want the Polish authorities and border guards to behave according to the law. Because right now what they are doing is illegal.”

Poland’s government on Tuesday announced it was seeking approval from the country’s president for a state of emergency to be imposed along part of the border for 30 days in response to migrant arrivals.

“The situation on the border with Belarus is a crisis, it’s very tense, because Lukashenko’s regime is transporting people mainly from Iraq to the territory of Belarus and is then shoving these people on to the territory of Poland, Lithuania and Latvia to destabilize our countries,” Poland’s prime minister, Mateusz Morawiecki, said.

The move, which would cover 183 towns 3 kilometers from the border, also requires approval from parliament. It has already attracted criticism from opposition parties and rights groups, which have said the state of emergency is less about stopping migrants than making it harder for activists and the media to be present at the border.

Jan Grabiec, a spokesperson for Civic Platform, the largest opposition party, said the state of emergency was not aimed at halting migrants and “it will only stop the Polish media from showing the chaos and helplessness of the government.”

Lithuania has also declared a state of emergency over the border situation and has appealed to the E.U. to impose new sanctions on Belarus. Both Poland and Lithuania strongly backed the Belarusian opposition during the protests against Lukashenko last year, offering asylum to some of its key leaders.

The European Court of Human Rights last week said Poland’s government must provide food, clothing, medical care and possibly temporary shelter to the Afghans. The court has not yet ruled whether Poland is obliged let the migrants enter its territory.