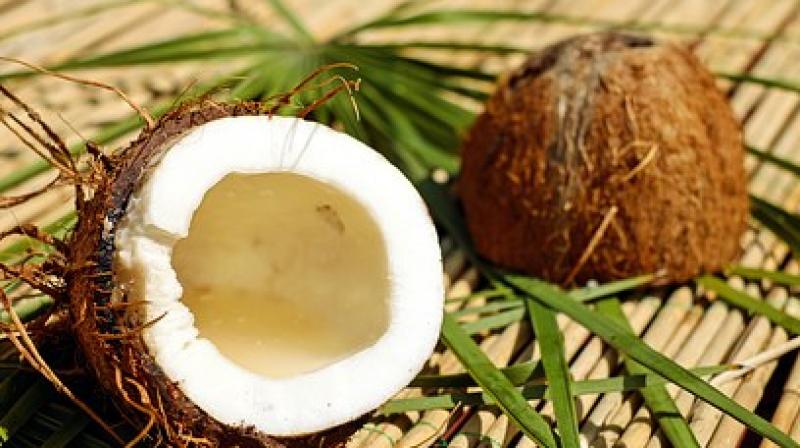 The humble coconut is having its moment as it is being lapped up across the world as a super ingredient that is making its way across industries.

The ubiquitous nature of coconut is being seen in varied applications. Coconut oil is used to moisturise the skin and hair and in soaps and cosmetics. In addition, the hard shells, fibrous husks, and long pinnate leaves may be utilized to produce a range of furniture and decorative goods. Thus, coconut is a versatile fruit that may be utilised in a variety of ways. Merajuddin Ansari, Executive Chef, Four Points by Sheraton Navi Mumbai says, “The fibre on the outside of the husk is used in ropes, doormats, potting soil, mattress stuffing, brushes, mats, rugs, joint sealant for boats (caulking), and sacks. In Brazil, tea produced from husk fibers is claimed to help with inflammatory diseases. The coconut shells are also utilised as bird feeders, a refuge for tiny birds and mice.” Madhu Kargunda, Founder, Tengin Coconut products based in Arsikere adds, “Coconut husk, the outer layer of coconut also called coconut fiber, in olden days in villages we used this to clean utensils, as a body brush now it has given a shape and made to dishwashers and vegetable cleaners and we also use it in farming which retains water, also called cocopeat.”
The humble coconut, an auspicious fruit according to Hindu tradition, is a symbol of prosperity and is believed to welcome Lakshmi, the goddess of wealth for Hindus. Nicky Lamba, Founder, Nesara By Nicky says, “Ancient doctors used to burn the shells to prepare tooth powder, creams and ointments for burn wounds. Charcoal is alcohol obtained from the hard shell and can also be used to make toothbrushes. The long pinnate leaves can be used as material to make a variety of products for furnishing and decoration.”

Coconut is an emollient and a humectant made from fatty acids, which can sometimes be comedogenic. “However, when you are product shopping and reading the labels, you can choose Caprylic/Capric Triglyceride instead of the words ‘coconut oil’. Coconut milk can be used in both face and hair masks. The leftover grated coconut, dry or wet, is great to be used in a face scrub or a face mask,” says Nikita Deshpande, Co-Founder, ilana. The coconut is one of the most versatile plants in the world. The flesh of the fruit can be used for cooking and to make dairy free milk substitutes. The water is a healthy electrolyte, the oil can be used in cooking and in making natural cosmetics, while the husk and the wood are used in building and construction. Coconuts are majorly used as a food ingredient in different forms such as oil, milk, flakes and flour. “Beyond its purpose in kitchen and skincare, coconuts husks, when burnt in low heat, acts as an insect repellant and are used in pujas because of their aroma. Coconuts also function as good mediums for growing flowering plants. The shell of the coconut is treated as firewood when gone bad,” says Shweta Mahadik, Clinical Nutritionist, Fortis Hospital Kalyan.

There are many ways to incorporate coconut oil into your beauty routine as a lip balm eye makeup remover, gentle cleanser tame split ends and even moisturise elbows and knees. Neha Sahaya, celebrity nutritionist and fitness enthusiast explains, “Coconut oil is beneficial for use in cosmetics, typically as a moisturiser, and in soaps. It is claimed to take care of various skin issues such as dark circles, hyper pigmentation and anti-aging. Coconut oil is used for curing various hair issues such as hair fall, dandruff, increase and improves not only the quality or hair but also eyebrows and eyelashes. It has become a common ingredient in the famous keto diet as a favourite keto coffee.”

Coconut helps in detoxifying your system, since it is rich in lauric acid, fatty acids, antioxidants and it’s full of minerals and vitamins. Lauric acid is useful in fighting viruses, fungi and bacteria, which cause many illnesses within the body. It is effective in reducing triglyceride and cholesterol levels, which lessens the chances of getting a stroke or cardiovascular disease. Namrata Reddy Sirupa, Co-founder, Satliva adds, “They are extremely healthy, containing fast metabolising fats known as MCT’s and are also rich in magnesium, selenium, iron and copper, leading to good heart health and lowering cholesterol. The benefits of cultivating coconut include the versatility of the entire plant and the many by-products that can be harvested from one individual tree.” Shweta Shah, Celebrity Dietician & Nutritionist, Fitza says, “Coconut has been useful in all areas of health and lifestyle, since ancient times. Being rich in healthy fats, it is useful as oil, soaps, topical creams, cosmetic products and external parts of the tree and fruit are used in brooms, furniture, biodegradable options.”

Banaras in a book

Why partners take to their heels