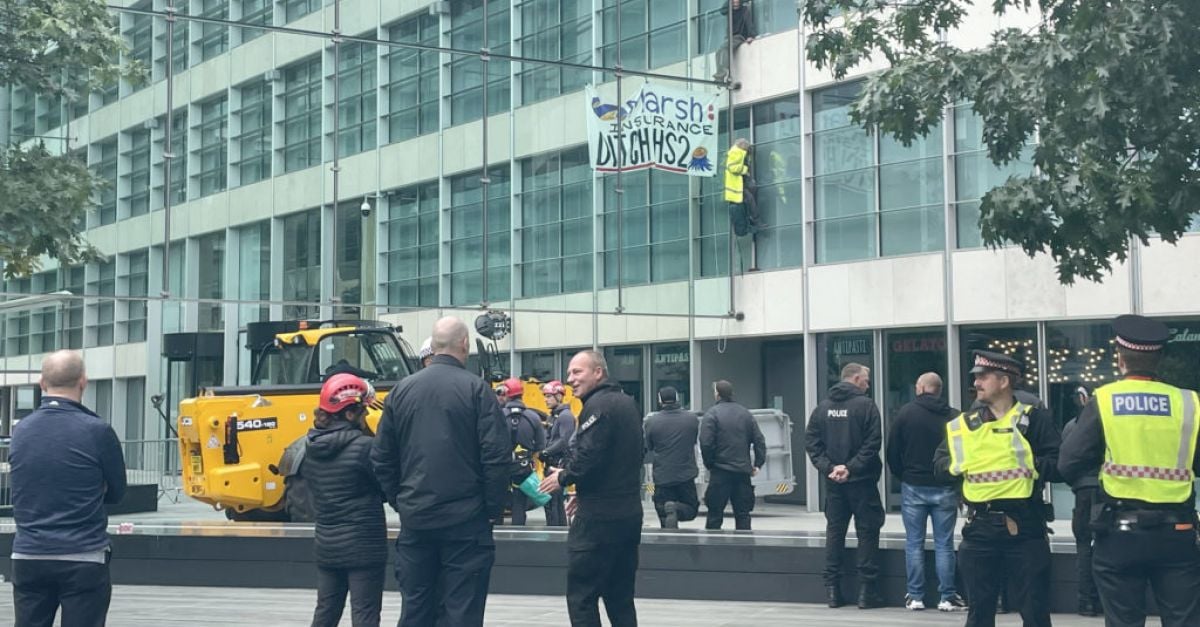 Activists have climbed a building in central London as part of ongoing environmental protests in the English capital.

Two demonstrators from HS2 Rebellion, an offshoot of Extinction Rebellion, scaled the seven-storey Tower Place West building in the City of London on Thursday.

The building houses the offices of insurance company Marsh, which insures subcontractors for the HS2 project.

We are with @metpoliceuk and @LondonFire engaging with protesters that have climbed a building on #LowerThamesStreet.

A number of officers are on scene working to keep disruption in the area to a minimum.

We will keep you updated with any further developments. pic.twitter.com/OYTVMDDObE

The two men locked themselves onto the first and second storeys of the building, with a banner reading “Marsh Insurance Ditch HS2”.

An extraction team with an excavator was working to try and get them down and the area around the building was cordoned off.

The City of London Police tweeted: “We are with @metpoliceuk and @LondonFire engaging with protesters that have climbed a building on #LowerThamesStreet. A number of officers are on scene working to keep disruption in the area to a minimum. We will keep you updated with any further developments.”

An HS2 Rebellion protester told the PA news agency that another two demonstrators with banners who were not climbing the building had earlier had their bags searched and were arrested for articles which could cause criminal damage, which he said was superglue.

HS2 Rebellion spokesman Adam, from London, said: “Essentially, we’re targeting the profiteers, the moneymakers, the facilitators behind these ecocidal infrastructural projects because without insurers protecting subcontractors, they wouldn’t be able to work on this.

“It’s all of our money which is disappearing into the pockets of people in the City who we don’t usually see or hear from.”

He said an employee from Marsh had come out to talk to the protesters and had tried to explain the company’s obligation to subcontractors.

The action was part of the ongoing Impossible Rebellion, a series of protests by Extinction Rebellion and related groups on environmental issues.

HS2 Rebellion is planning another protest on September 9th, which the group’s spokesperson said would be “all they way up the HS2 line”.

It will come ahead of a debate in the UK Parliament on September 13th to discuss a petition calling for the high-speed rail project to be stopped.