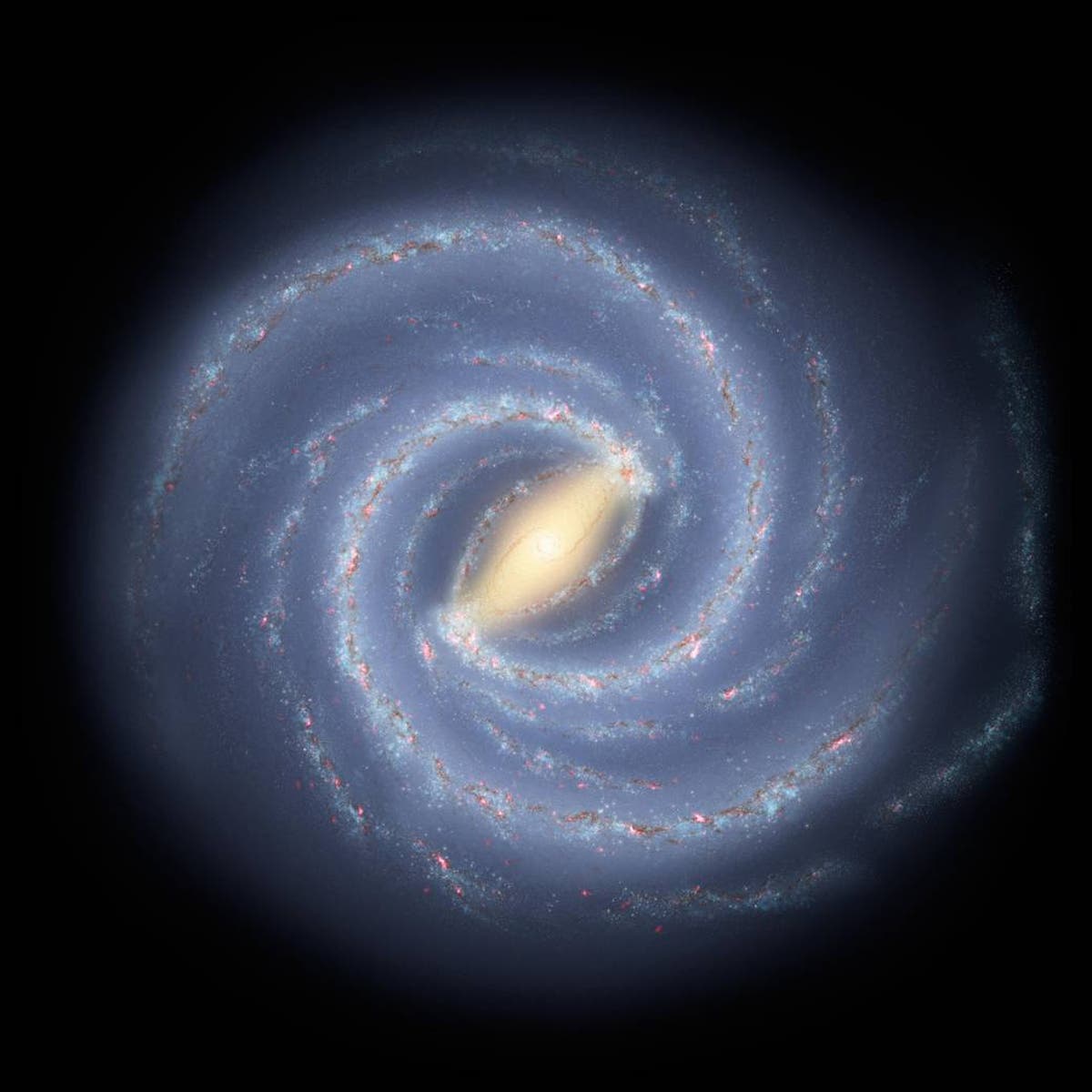 Scientists have spotted a cluster of young stars and star-forming gas clouds sticking out of the Milky Way’s spiral arms “like a splinter poking out from a plank of wood”.

The findings, described in the journal Astronomy & Astrophysics, shed more light on the finer structure of our home galaxy.

Astronomers broadly classify galaxies into three major categories – elliptical, spiral and irregular – with more than two-thirds of observed galaxies being spiral shaped, including our own abode, the Milky Way.

While scientists have a rough idea of the size and shape of the Milky Way’s spiral arms, they say viewing the full structure of our home galaxy is challenging since the Earth is inside it.

“It’s akin to standing in the middle of Times Square and trying to draw a map of the island of Manhattan,” scientists from Nasa’s Jet Propulsion Laboratory (JPL) in California explained in a statement.

In the new study, astronomers observed a nearby portion of the galaxy’s “Sagittarius Arm,” and detected a previously unknown feature with an orientation “dramatically different than the arm’s”.

Mapping the Milky Way is not easy when we're inside it. Thanks to data from our retired Spitzer Space Telescope & @ESA’s Gaia mission, astronomers discovered a "break" in one of its spiral arms offering insight into the large-scale structure of our galaxy. https://t.co/166ilMaWSu pic.twitter.com/jNRLBV8CrR

While it was previously thought that young stars align closely with the shape of the arms they reside in, the researchers found four star-forming gas clouds, or nebulae, sticking out of the Sagittarius Arm “like a splinter poking out from a plank of wood”.

According to the researchers, the nebulae – the Eagle Nebula, the Omega Nebula, the Trifid Nebula, and the Lagoon Nebula – and some young stars in this arm were stretching out for a distance that takes 3,000 years for light to travel.

To make the discovery, the astronomers used Nasa’s now-retired Spitzer Space Telescope to seek out newborn stars, nestled in the nebulae, since the telescope can detect infrared light that can penetrate the galaxy’s gas and dust clouds.

Combining the new findings with the latest data from the European Space Agency’s Gaia mission, the researchers found that the long, thin structure associated with the Sagittarius Arm is made of young stars moving at nearly the same velocity and in the same direction through space.

“A key property of spiral arms is how tightly they wind around a galaxy,” Michael Kuhn, lead author of the study from Caltech, noted in a statement, adding that this characteristic is measured by the arm’s “pitch angle”.

A circle has a pitch angle of 0 degrees, and as the spiral becomes more open, the pitch angle increases, he explained.

While most models of the Milky Way suggest that the Sagittarius Arm forms a spiral with a pitch angle of about 12 degrees, the structure examined in the current research stood out at an angle of nearly 60 degrees.

This artist's concept illustrates the new view of the Milky Way. Scientists have discovered that our galaxy's elegant spiral structure is dominated by just two arms wrapping off the ends of a central bar of stars. Previously, our galaxy was thought to possess four major arms. pic.twitter.com/aQSfYJUvoc

“When we put the Gaia and Spitzer data together and finally see this detailed, three-dimensional map, we can see that there’s quite a bit of complexity in this region that just hasn’t been apparent before,” Dr Kuhn said.

While it is unclear what causes spiral arms to form in galaxies like the Milky Way, the scientists speculate that the stars in this part of the Sagittarius Arm likely formed around the same time, in the same general area, and are uniquely influenced by the forces acting within the galaxy such as gravity and shear due to the galaxy’s rotation.

“Ultimately, this is a reminder that there are many uncertainties about the large-scale structure of the Milky Way, and we need to look at the details if we want to understand that bigger picture,” Robert Benjamin, a co-author of the study from the University of Wisconsin-Whitewater, said in a statement.

“This structure is a small piece of the Milky Way, but it could tell us something significant about the galaxy as a whole,” Dr Benjamin added.