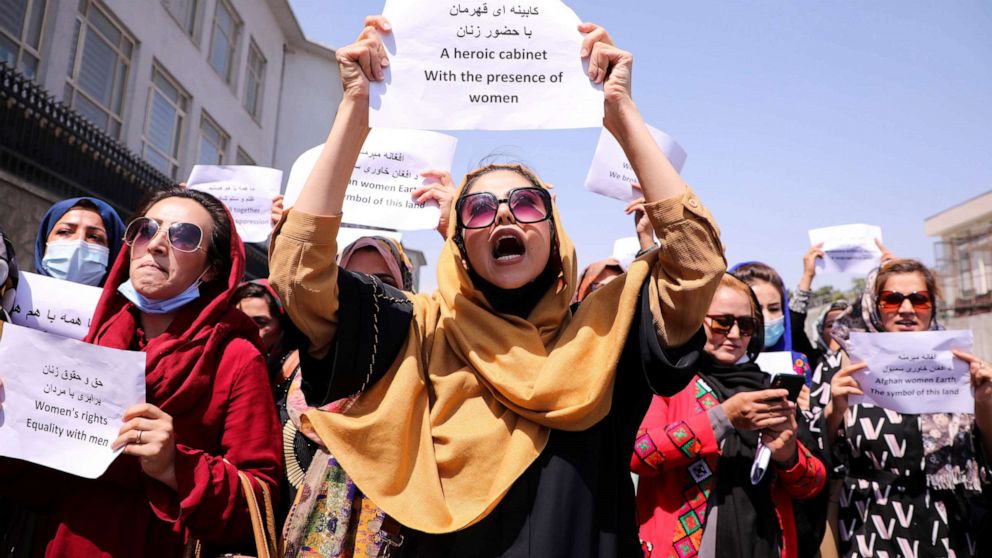 Afghan women say they were teargassed and beaten at a protest in Kabul on Saturday, as Taliban rule continues to be met with reported armed resistance in Panjshir and a looming humanitarian crisis.

An estimated 100 women gathered outside the building of the Defense Ministry in Afghanistan’s capital before it was dispersed, according to one of the demonstrators, and they have vowed to continue protesting despite fearing reprisals.

Sudaba Kabiri, 24, a university graduate who has left her employment at an private company since the Taliban took over, told ABC News that they would continue to protest to show “we are part of this society” and resist a return to the darkest days of the 1990s, when the Taliban were last in power.

This was not the first women-led protest in Afghanistan this week. On Friday, protesters gathered outside the presidential palace in Kabul, carrying placards with slogans such as, “A society in which women are not active is a dead society,” after another protest in the city of Herat on Thursday.

Kabiri shared videos at the protest with ABC News that she said showed armed Taliban soldiers barricading in the protesters, which she said was then dispersed, with soldiers firing towards them, using tear gas and stun guns on the demonstrators.

“They stood in front of our protest,” she said. “They did not allow us to continue our protest, because they want to eliminate the power of women. They don’t want to hear from the women… They [govern] as if this country just belongs to men. Women are nothing. It’s our country as well. Women are as educated [as men]. How can they remove us from this society? We are a part of this society. We protest to announce: ‘we are here.'”

The Taliban have not yet publicly commented on the protests.

The Taliban have offered a more conciliatory public tone on women’s rights since their return to power, saying that women’s education can continue under Sharia law and that women are invited to take part in public life. However, women have since been told to stay at home for supposed security reasons in Kabul, and Kabiri believes the Taliban is projecting a “soft image” on the issue in order to gain international legitimacy. So far, countries such as the U.S., the U.K., Russia and China have indicated a willingness to engage with the new regime, but have stopped short of formally recognizing the government.

“The Taliban is as dangerous as the past,” she said. “Do not believe them.”

Saturday’s protest came after celebratory gunfire was heard across Kabul, reportedly because the Taliban claimed to have successfully taken Panjshir province, the last holdout against their rule. However, the National Resistance Front of Afghanistan, led by Ahmad Massoud, the son of legendary resistance fighter Ahmad Shah Massoud, who led resistance against the Soviet invasion in the 1980s, and ousted former vice president Amrullah Saleh, both rejected those claims on social media. Saleh denied reports he had fled the country and said “the resistance is continuing.”

International agencies have warned that a dual economic and humanitarian crisis is looming in the country. Human Rights Watch called on “urgent action” for foreign donors to allow humanitarian aid into the country on Friday, amid warnings from the U.N. that many banks remain closed and food prices are rising.

The Taliban, now in control of the capital and its airport, are in negotiations with Qatar to resume its functioning, which could prove crucial for the hundreds of U.S. and western nationals, as well as thousands of other Afghan allies, still hoping to leave the country after evacuation efforts wrapped up on Aug. 31.

“There are three parties engaged in discussions to resume operations at Kabul Airport,” Qatar’s Dr. Mutlaq bin Majed Al Qahtani, Special Envoy of the Minister of Foreign Affairs for Counterterrorism and Mediation in Conflict Resolution, said in a statement to ABC News on Friday. “This includes Qatari technicians who have been on the ground for 48 hours to negotiate the steps that need to be taken.”

Despite the challenges to their rule, however, the Taliban are expected to announce the formation of a new government soon. But Kabiri is determined to keep protesting for as long as she can.

“Today was the most dangerous day for us,” she said. “The Taliban sprayed spice [tear gas] on us, they fired on us, they injured us. They will kill us, until then we will fight for our generation’s rights? The Taliban cannot remove, they cannot silence our voice. We are part of this society, this country belongs to us as well. Not only for men.”

Asked what message she hoped the protests would send, Kabiri said: “We want to show them that in the past, when the Taliban were in Afghanistan 20 years ago, the women were silent. We are not like the past women. We do not have to stay silent, we do not have to keep ourselves silent.”