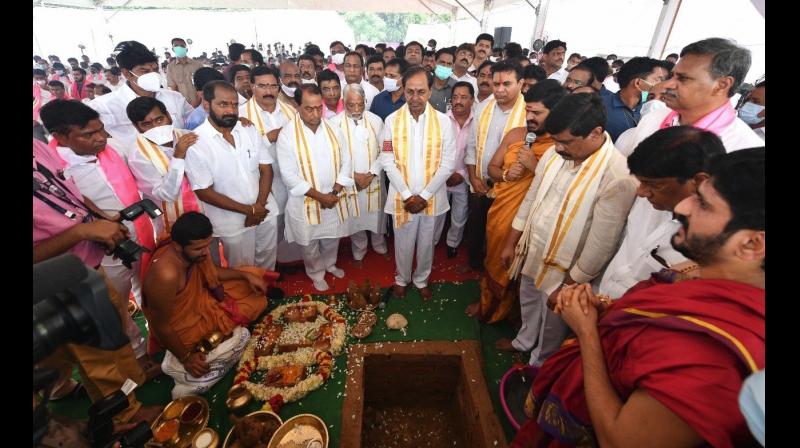 Hyderabad: Amid chanting of Vedic hymns by priests and with elaborate religious rituals, the Telangana Rashtra Samiti (TRS) president and Chief Minister K. Chandrashekar Rao on Thursday laid the foundation stone for the construction of TRS office in Delhi.

The 'bhumi puja' ceremony was held on a grand note which was attended by several Cabinet ministers, party MPs, MLAs, MLCs etc. With this, the TRS became the first regional party from the Telugu states to construct its office in Delhi and the third from South India after DMK and AIADMK from Tamil Nadu.
Contrary to expectations that the Chief Minister would address the gathering after the ceremony, he left the venue soon after the event.

Later, speaking to media personnel, party working president K.T. Rama Rao said with the launching of works for construction of office in Delhi, the two-decade old TRS had reached a new and significant milestone in its 20th year of formation. He added that the party office in Delhi would be a three-storeyed building due to height restrictions in Vasant Vihar.

"This is a historic occasion for the TRS. This will remain as a red-letter day in the history of the TRS as well as Telangana statehood agitation. The TRS is the first regional party from Telugu states to set up office in Delhi. It's a proud moment for not only the TRS but the entire Telangana as the TRS is identified with the self-respect of Telangana," Rama Rao said.

Seemandhra rulers when he launched the TRS in 2001 in Jaladrushyam, Tank Bund. "Chandrababu Naidu closed down the TRS office in Jaladrushyam while YSR attempted to sabotage the Telangana movement. KCR overcame all these hurdles and achieved Telangana state status in 2014. Today, the TRS has reached a stage with the blessings and support of Telangana people that it could open its office in the national capital and make the Telangana flag fly high in Delhi."

Roads and buildings minister Vemula Prashanth Reddy said the three-storeyed building would have a conference hall, a library and an audio-visual theatre. He said the TRS office in the national capital would serve as a research centre for the country which would be built within a year. The minister said the Telangana Bhavan would be a platform in Delhi to highlight the revolutionary welfare schemes being implemented in Telangana.

Bad goes to tragic for Biden on Afghanistan: The Note