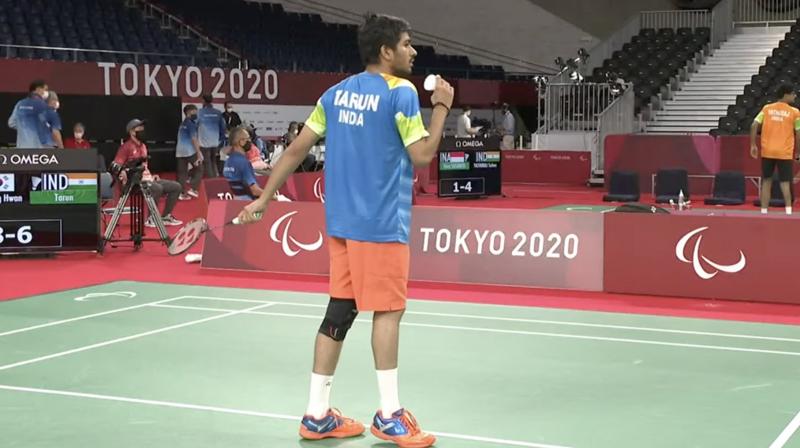 Tokyo: Indian shuttlers Suhas Yathiraj and Tarun Dhillon continued their impressive run, notching up contrasting wins in their respective second group match to qualify for the semifinals in the badminton competition of the Tokyo Paralympics here on Friday.

Manoj Sarkar, who competes in SL3, also qualified for the semifinals after winning his second and last group stage match at the Yoyogi national stadium here.

Suhas, the district magistrate of Gautam Buddh Nagar in Uttar Pradesh, will face France's top seed Lucas Mazur, while Tarun will cross swords with Indonesia's Fredy Setiawan next later in the day.

With two wins out of three matches so far in their respective groups, both Suhas and Tarun have qualified for semifinals and might face-off in the knockout stage.

Suhas has an impairment in one of his ankles, while Tarun has restricted knee movement following a severe injury that he suffered at the age of eight.

In SL3 class, Manoj secured a 21-16 21-9 victory over Ukraine's Oleksandr Chyrkov to make it to the knockout stage after finishing at the second spot in group A behind world no 1 Pramod Bhagat.

The 31-year-old, who had contracted polio at one, suffered a loss to Bhagat in his opening match.

While Suhas hardly broke any sweat during his contest, Tarun had to toil hard to edge out Hwan, who recovered from an opening game reversal to grab the second game.

In the decider, Tarun made a sluggish start but managed to grab a three-point lead at the interval.

The Korean managed to claw back at 17-17 but the Indian pushed his opponent to commit a series of unforced errors to first move to a comfortable three-match point and then sealed the contest when Hwan again sent the shuttle wide.

Bhagat has already qualified for the semifinals in SL3 class.

Satwik-Chirag loses to world No.1 Sukamuljo and Gideon in second match