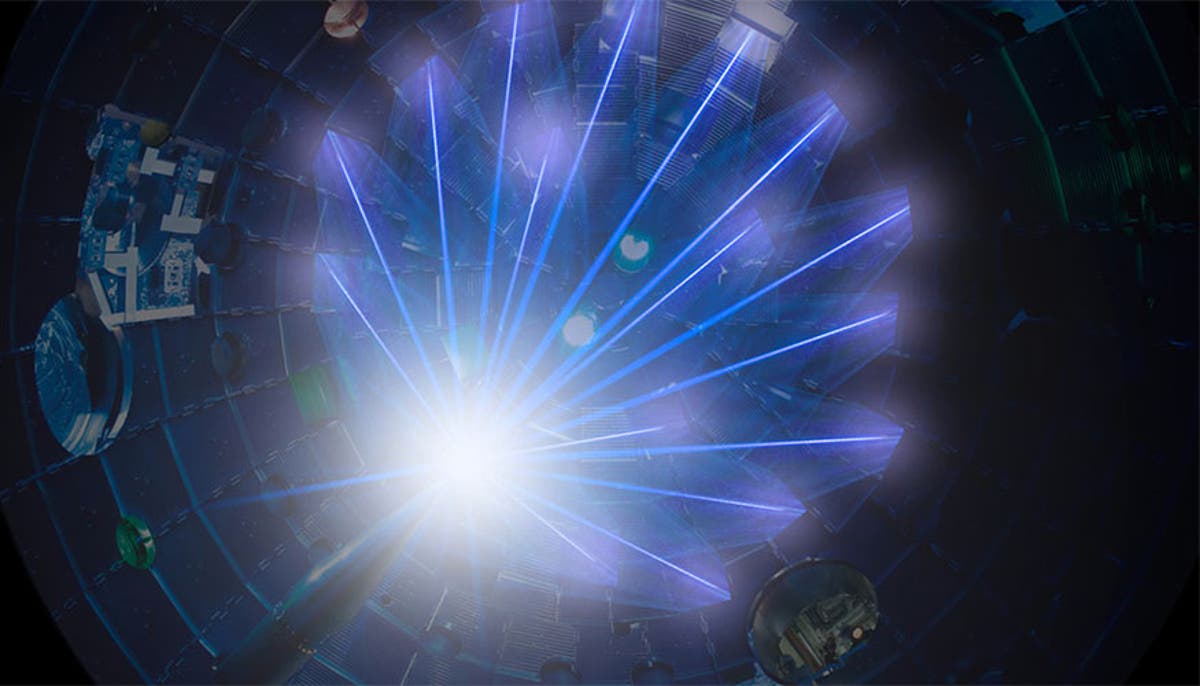 Nuclear scientists in the US claim to have crossed a crucial milestone towards achieving a high energy output from nuclear fusion reactions that can kickstart a self-sustaining chain reaction.

The successful experiment by scientists from the National Ignition Facility (NIF) at Lawrence Livermore National Laboratory in the US could pave the way for clean nuclear fusion energy in the future that may help combat climate change.

In the experiment, scientists focused lasers from NIF — the size of three football fields — onto a tiny capsule containing deuterium and tritium – different forms of the element hydrogen – producing extreme temperatures and pressures the likes of which are found at the heart of the Sun.

Although the energy output lasted for only 100 trillionths of a second, the reaction generated more than 10 quadrillion watts of power that could help initiate thermonuclear fusion.

Once a fusion reaction is initiated, it releases sub-atomic entities like alpha particles that interact with the surrounding hot plasma – the fourth state of matter – and heat it up further.

The hot plasma releases more alpha particles, in a self-sustaining chain reaction referred to as ignition – a process never fully realised until now.

LLNL’s @lasers_llnl took a historic step forward in the decades-long quest for #fusion ignition on Aug. 8, achieving a yield of more than 1.3 megajoules. The milestone puts researchers at the threshold of #ignition & opens the door to new NIF experiments. https://t.co/MjQA0MZXrl

In the new experiment, whose results are yet to be published in a peer-reviewed journal, the NIF scientists report an energy output of over one mega-joule – a threshold agreed for the onset of “ignition,” and six times the previous highest energy achieved.

“This is a very significant step forward. The energy produced is more than the output in any of the previous experiments, almost 25 times greater than one of the best previous attempts,” laser physicist Ravindra Kumar, who was not involved in the experiment, told The Independent.

According to Dr Kumar, who is a senior professor of nuclear and atomic physics at the Tata Institute of Fundamental Research (TIFR) in Mumbai, the success of this experiment is the biggest advance towards nuclear fusion since attempts began in the 1970s.

“This enables experiments that will check theory and simulation in the high energy density regime more rigorously than ever possible before and will enable fundamental achievements in applied science and engineering,” Dr Mason noted in a statement.

Compared to the fission reactions used in nuclear power stations, which involves the splitting of atoms to release energy, fusion forces atoms of hydrogen together, producing a large amount of energy and limited radioactive waste.

Due to these features of nuclear fusion reactions, they are seen as a potential way to produce clean energy in the future.

Fusion reactions have proven difficult to control, however, and no experiments have produced more energy than has been put in to initiate the reaction.

Even though the current attempt still required more input energy than it got out, scientists at Imperial College London, who are analysing the data from the experiment, said it is the first to reach the crucial stage of “ignition.”

They say achieving ignition would allow considerably more energy to be produced than ever before, paving the way for “break even,” where the energy input is matched by the output.

“This is crucial for opening up the promise of fusion energy and allowing physicists to probe the conditions in some of the most extreme states in the universe, including those just minutes after the Big Bang,” Professor Jeremy Chittenden, co-director of the Centre for Inertial Fusion Studies at Imperial College London, said in a statement.

“Controlled fusion in the laboratory is one of the defining scientific grand challenges of this era and this is a momentous step forward,” Dr Chittenden added.