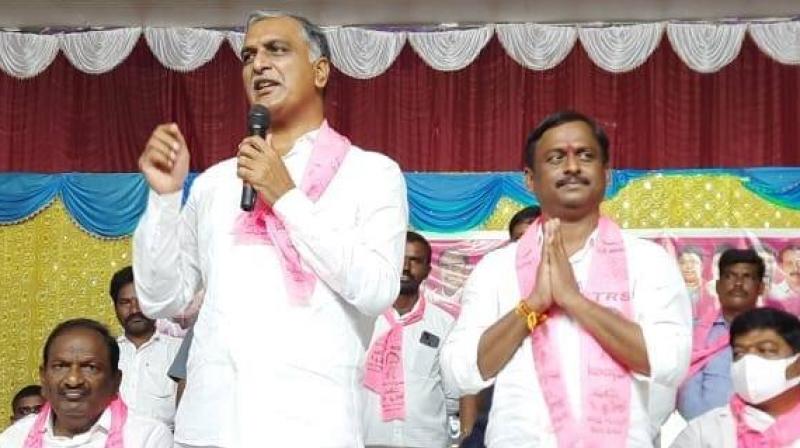 Karimnagar: The central government issuing orders to state governments to sell all the government entities that are running in loss, but Chief Minister Chandrasekhar Rao is protecting them, including the Road Transport Corporation (RTC), said the finance minister Harish Rao on Friday.

The minister was participating in the Atmayee Sammelanam programme held by the retired employees’ association in Huzurabad on Friday.

Harish said that during the Corona pandemic period, the RTC incurred a loss of more than Rs 1lakh crore, but KCR never thought of selling it. Moreover, he announced a 30 per cent of PRC unlike the central government which increased it only by 7 per cent.

He said Karimnagar MP Bandi Sanjay has done nothing for development of the parliament segment in the last two and a half years. After winning as MP, Bandi Sanjay did not invest even a small sum of Rs10 lakh in his constituency, he said.

Harish alleged that, for fear of defeat, former minister Etala Rajendar is talking in a senseless manner. “The Huzurabad by-poll is not going to be held for the benefit of a single person; it involves the prestige of 2 lakh voters,” he said.

The minister said TRS candidate Gellu Srinivas Yadav was in the party right from the beginning and active all these 20 years. He is a disciplined party worker and has only 20 cents of land while his opponent Etala owned 2,000 acres of land.

The people must decide to which party they would vote, whether to the BJP trying to sell the government entities or to chief minister KCR and his TRS party that is trying to protect them, he said.