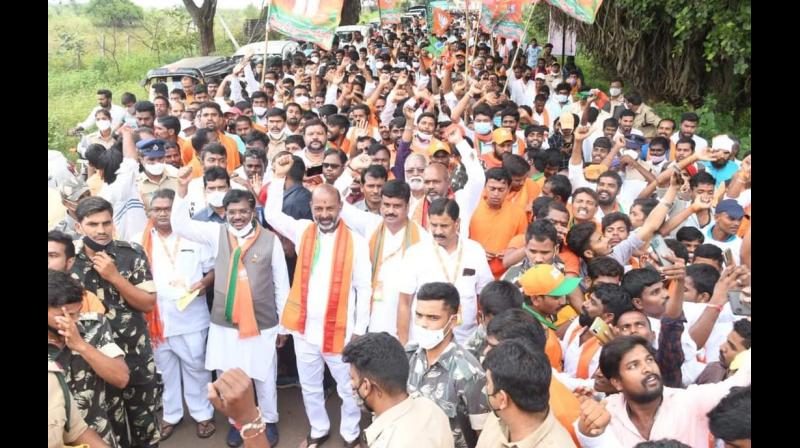 Telangana Chief Minister K. Chandrasekhar Rao is misleading the people stating that the Union government is praising the TRS government for its developmental works, whenever he gets the PM’s appointment, he said and urged people and media not to be taken in by his false propaganda.

On the seventh day of his Praja Sangrama Yatra in Vikarabad district, he said that TRS leadership is unable to digest the overwhelming response to his padayatra. Rao is afraid of a thumping BJP win in Huzurabad, which is why to divert the attention of people from the BJP yatra, he is playing gimmicks in Delhi by asking his party cadre to hoist flags in the state, he said.

Sanjay pointed out that the BJP never had alliance with TRS, which had poll pacts with Congress, TDP, Communists and MIM.

The party’s core committee member G. Vivek Venkata Swamy alleged that only two persons—Chandrasekhar Rao and Mega Krishna Reddy had pocketed Rs 1 lakh crore. The estimation of the Kaleshwaram project has increased from Rs 36,000 crore to one lakh crore, he said.

There is huge corruption in Palamuru-Rangareddy irrigation project works, he alleged. Chandrasekhar Rao, Y.S. Jaganmohan Reddy and Mega Krishna Reddy were looting the wealth of Telangana state, he said.