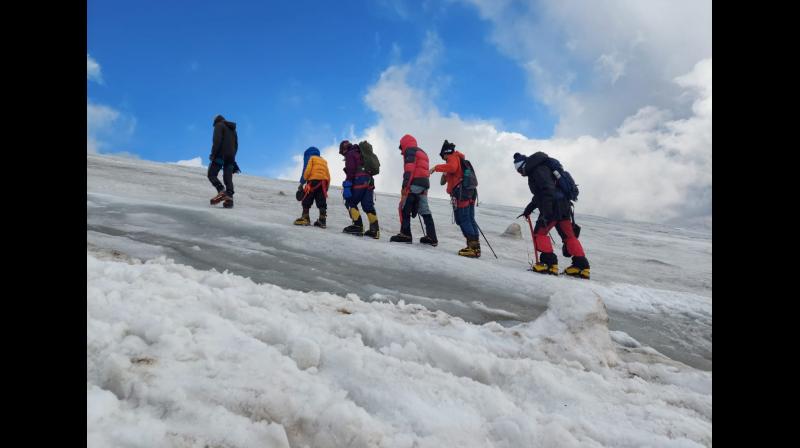 The sudden change in weather patterns is making mountain expeditions more dangerous, as the members of a team from India which set out to conquer Mt. Elbrus in Russia found last month.

Vaishnavi Padakanti (16), Karthik Padakanti (12) and Pothuraju Samanyu (11) from the city, Anamika (22) from Uttarakhand and Gayathri (39) from Karnataka started out on August 17 to scale the 5642-m peak. Initially, everything went well. But when the group was just 400 metres away from the summit, the weather suddenly took an extreme turn.

“The snowfall intensified and the wind speed was very high. I started to experience Acute Mountain Sickness (AMS) and my oxygen levels dropped suddenly,” recalls Vaishnavi a Standard XII student. The fact that this unforeseen weather change took place in the wee hours (at around 3 a.m), when it was very dark, made matters worse.

“The dense snowfall made walking difficult. Also, the snow was getting into my eyes through my goggles,” she rues. She soon became dizzy, and fell.
Vaishnavi’s brother Karthik says they had climbed a small peak a couple of days before tackling Elbrus to get acclimatised to the weather.

“But the climate turned out so harsh that it was literally impossible for us to go ahead. We know that we were there to scale the peak, but the weather got the better of us,” he says, adding that the incident had made the trail very dangerous.

The team hoped the high winds and heavy snowfall wouldn’t last long. But the situation didn’t improve, and Bharath Thammineni, one of the guides, decided to turn back.

Every climbing expedition is unique and every mountain poses its own set of challenges, he says, but vows to be better prepared the next time. “‘Never give up’ is the mantra I follow, so I shall soon commence my prep to go mountain climbing again,” he says.

Vaishnavi, Karthik and Samanyu had been prepping up for this expedition for over a month. “We also used to work out, do stretches, push-ups, sit-ups, yogasanas and suryanamaskars, apart from lifting tyres. My parents were a bit apprehensive about sending us on the trip, but they trusted and supported us,” says Samanyu.

Vaishnavi was disappointed that they had to abandon the attempt to scale Elbrus. “I think I took the challenge very easy. Perhaps that has cost me a lot. But I will never underestimate any summit again,” she says.

Though the group had to turn back without achieving the goal, the trip did teach them some important lessons. Vaishnavi says the expedition has been an amazing experience, and she realised that sometimes, in life, we encounter tough situations but we need to remember that they don’t last long.

Karthik, a Standard VII student, says the expedition taught him several things, like exhibiting presence of mind during a critical situation. “I am very disappointed that we couldn’t make it but this trip taught me how to be stronger,” he says.

11 stylish ways to use monochrome in your home

Beyonce at 40: 13 of her most legendary fashion moments