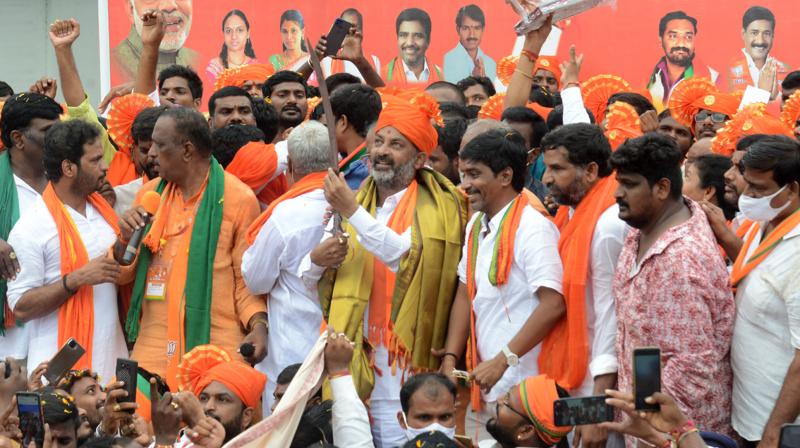 HYDERABAD: BJP state president and MP Bandi Sanjay Kumar came down heavily on Chief Minister K. Chandrashekar Rao for being hesitant to reveal the details of funds allocated by the Central government to Telangana state for the last seven years during his Praja Sangrama Yatra, which entered into eighth day on Saturday while former Maharashtra Chief Minister Devendra Fadnavis asserted that the yatra launched by Sanjay would definitely change the fate of Telangana. Fadnavis joined the padayatra as a guest at a public meeting near Babu Jagjivan Ram statue in Vikarabad.

“You (CM) met Prime Minister Narendra Modi and listed out various grievances, at the same time, why didn’t you disclose to the people the details of Central funds allotted to the state?” he pointed out. All major developmental works and welfare schemes being implemented in Telangana state were funded by the BJP government, he said.

Sanjay said Chandrasekhar Rao got an appointment by the Prime Minister, and questioned him why he was not giving appointment to elected representatives in the state.

Showering praises on Fadnavis for the various welfare schemes he implemented in Maharashtra when he was the Chief Minister, Sanjay Kumar said he had constructed around 70,000 houses and handed over them within a year to the poor people. “We invited Fadnavis here to give inspiration to Chandrasekhar Rao, who lured the people by promising 2BHK houses for the last seven years, but did not hand over so far,” he said.

BJP chief said Chandrashekar Rao cheated people of Vikarabad by assuring them to develop it as a tourist spot like Ooty. “Once the BJP comes to power, Vikarabad will be renamed as Ananthagiri district,” he assured. “Vikarabad is at the abode of Sri Anantha Padmanabha Swamy and I’m happy to reach here at the divine place,” he said.

Reacting to slogans of “Future CM Bandi Sanjay” by party activists, BJP state president said he was not interested in the Chief Minister’s post. “The BJP is not the Congress or the TRS to send posts in sealed covers. It is a family of BJP activists including Modi, Amit Shah and Nadda,” he said.

Refuting allegations that the TRS and the BJP are the two sides of the same coin, Sanjay said TRS made alliance with the Congress, the TDP, the MIM and the Left parties, but the BJP never tried for any alliance.

Addressing the gathering on the occasion, Fadnavis asserted that the Praja Sangram Yatra launched by Sanjay Kumar would definitely change the fate of Telangana. He appealed to the people to bless the BJP and the yatra to form a democratic, pro-poor and farmers’ government in Telangana. He said the way the yatra was getting overwhelming support from people from all walks of life clearly indicated that they wanted a change in Telangana’s politics as they were not happy with the KCR government.

Fadnavis alleged that Chief Minister K. Chandrashekar Rao ignored the governance and was seriously trying to make his son K. T. Rama Rao as the next Chief Minister. Alleging that Rao formulated new schemes sitting in his farmhouse, Fadnavis said Rao had duped people by not fulfilling his promises.

The TRS government even failed in waiving farmers' loans as promised and in providing double bedroom houses to the poor, he lamented. Instead of taking care of the welfare of people, Rao always was strengthening his family financially, he alleged.

Fadnavis alleged that the AIMIM was ruling Telangana on behalf of the TRS, adding that Chandrashekar Rao had no guts to conduct Hyderabad Liberation Day on September 17 as an official programme.