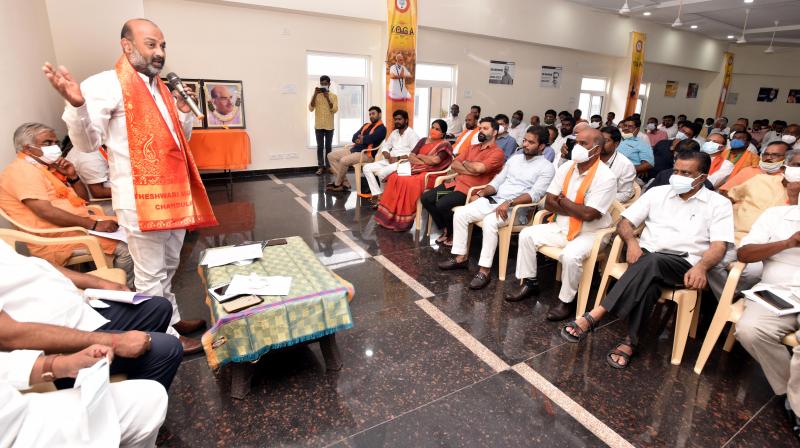 HYDERABAD: BJP state president and MP Bandi Sanjay Kumar on Sunday crossed the 100-kilometre mark of his Praja Sangrama Yatra near Velchal village in Vikarabad district. It is nine days since he, accompanied by party activists and senior leaders, has started his padayatra. Women welcomed the BJP chief with traditional Bonalu at Mamdanpally.

Reacting to completion of his 100-km mark, Bandi Sanjay said: “I have been away from my family members since last one month due to padayatra and Parliament session. My family members understand the situation and cooperate. As BJP activists, we always believe in universal family and work for society, country and Dharma.” Incidentally, his family members met him on Sunday

Continuing his scathing attack against TRS, the BJP chief said Chief Minister K. Chandrashekar Rao realised he would face a shameful defeat in Huzurabad by-election. “On the pretext of Covid-19, CM KCR favoured postponement of the Huzurabad by-poll,” he remarked. He asserted that whenever held, BJP will win Huzurabad by-election with a thumping majority “whatever the hurdles created by TRS.”

On occasion of the birth anniversary of Sarvepalli Radhakrishnan, the MP garlanded the portrait of the former President of India at the Mamdanpally camp. He also honoured many teachers on the occasion of Teachers’ Day. Nizamabad MP Dharmapuri Arvind, BJP national vice-president D.K. Aruna, former minister Chandrasekhar and former MP Rathod Ramesh were among those who participated in the padayatra.

Bandi Sanjay attributed his success to his father being a teacher.  He said he had learnt to always think about the country and Dharma because of his father and by regularly attending RSS meetings.

“There should be one school per kilometre in the state, in contrast to KCR regime’s wine shop or bar per kilometre,” he observed. He said teachers who have retired are not being replaced by recruiting new teachers. Teacher posts have been cut down further by closing existing schools, he remarked.

The BJP chief mocked the Chief Minister saying if Narendra Modi works for 18 hours, KCR sleeps for 18 hours. He maintained that his padayatra is aimed at overthrowing the corrupt TRS government. Criticising AIMIM, he said even Muslims have realised that the Majlis party is using them for its political benefits. “There is no development in Old City and Metro Rail has also ignored it,” he pointed out.