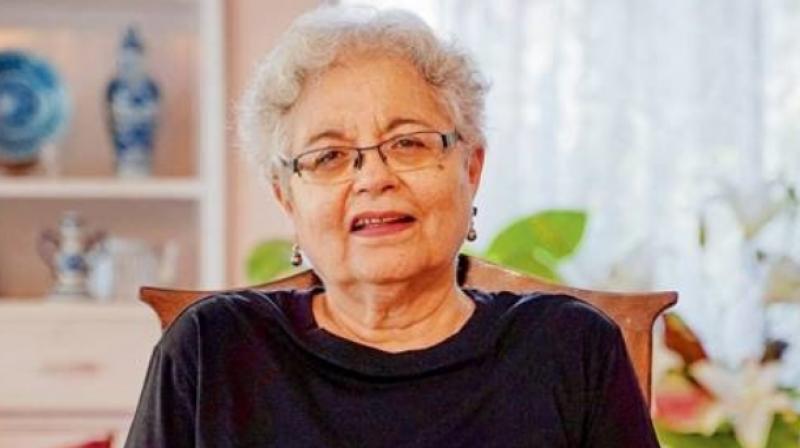 A Parsi by birth, Coomi Kapoor has brought forth a book, The Tatas, Freddie Mercury & Other Bawas: An Intimate History of the Parsis, which is a riveting account of some of the famous members of her community who have brought much accolade to India in the past century.

Incidentally, some of the famous names belonging to the Parsi community include Dadabhai Naoroji, Dinshaw Petit, Homi Bhabha, Sam Manekshaw, Jamsetji Tata, Ardeshir Godrej, Cyrus Poonawalla, Zubin Mehta and Farrokh Bulsara (aka Freddie Mercury). These are names that have contributed to their adopted home across various fields be it, the Indian Army, nuclear physics or rock and roll.

Sadly, however, with fewer than 60,000 Parsis left in all of India, the community is fast disappearing.

What brought the book about?

However, the inspiration for the book came to Coomi quite unexpectedly.

“Some years back, I visited the Parsi pilgrimage sites of Sanjan, Udvada and Navsari. I was ashamed to find that I knew little about my own family roots and community and started researching the subject,” explains Coomi. “A short while later, a publisher asked me to write a book on the Parsis and I was delighted to accept the offer.”

Despite her excitement, Coomi experienced a dilemma. “I was not sure how I was to go about the project. I didn’t want a dry history of events. Nor did I want to do a Who’s Who of illustrious names,” says Coomi. “Too often, books on Parsis are too eulogistic. I wanted a readable story about a remarkable community but a picture that included warts and all.”

Then adding that she didn’t want a book just for Parsis, Coomi tells us that she wanted something that would be interesting for all Indians. “And that is not difficult considering Parsis of the past and present have contributed to the country in so many different ways,” she adds proudly.

A long, long time to the book

That being said, it took several years to complete the book as she was not working on the book full time, she tells us. “I read up all the books I could find on the Parsis. But my most important and original input came from interviews with people. I had to make several trips from Delhi to Mumbai, which is where most Parsis live,” she explains. “And it surely took a while to fix up appointments with all three of the main protagonists in the Tata dispute — Ratan Tata, Cyrus Mistry and Nusli Wadia. Fortunately, I met nearly all my sources before the Covid pandemic,” says Coomi.

Indeed, a good part of the book explores the Tata-Mistry controversy. “Some people ask why I started with a business topic, the Tata–Mistry clash,” recollects Coomi as she explains. “I began with the recent developments at Tatas because I felt this was a fascinating subject. Once a quintessentially Parsi business house, which is India’s largest and most respected, only one share in Tata Sons, the controlling company, is held by a non-Parsi. The main protagonists are Parsis and came from dynasties that played a dominant role in the growth of Bombay, trade with China and the industrialisation of western India.”

Even so, she has not tried to paint a picture that was not there. “There are no black and white answers as to who is right or wrong. I’ve offered certain facts and have let the readers draw their own conclusions,” Coomi states.

That being said, a lot of the information given has never been in the public domain before, Coomi points out to us. “And that’s despite many books that have been written on the Tatas. At present the future of this great Indian business house, founded by descendants of Parsi priests, is unclear. It would be a shame if it fell into the wrong hands,” Coomi explains.

So does Coomi have a favourite among all the Parsis she’s mentioned in the book? “Yes,” comes her answer: JRD Tata and Nani Palkhivala.

“JRD was a pioneer businessman who opened many new industries for his group. But he is best known for starting and overseeing the aviation industry in India. He was also the first Indian to obtain a pilot’s license. It is certainly a shame that no one thought of naming any of our airports after him,” points out Coomi, not forgetting to mention how JRD always stressed that ethicality in business dealing was even more important than the bottom line.

As for her bias towards Palkhivala, she has a point. “Palkhivala’s superb legal arguments are responsible for preserving our constitution from encroachment by the legislature. He coined the phrase ‘basic structure of our constitution’, which is the touchstone for upholding democracy in our country,” explains Coomi, who always cherished a love for biographies over fiction.

Another reason JRD Tata and Palkhivala remain her favourite, she says, is because both men were so humble and humane that they left an indelible impression on most people they came in contact with.

As to what does she plans to do next, she says, “I’ve just finished a book, so I need time to think what I’d like to do next.”

Join us on Google News to keep up to date with the latest news
Tags
author interview book for parsis in india coomi kapoor the tatas freddie mercury & other bawas: an intimate history of the parsis

Scared to step foot in a gym? Here’s some tips to overcome your fear

Foretelling the road ahead